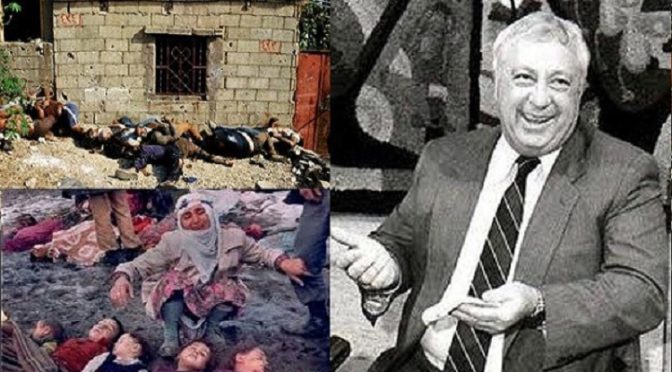 Yet nothing in the history of the usurping Zionist entity compares to the slaughter at aforementioned Sabra and Shatila which began on this day 36 years ago and ended on September 18th. The fanatical and hateful Phalangists, armed to the teeth, financed, trained and logistically supported by ‘Israel’, monstrously and sadistically slaughtered around 3,500 Palestinians and Lebanese Shi’a for 72 hours, engaging in the kind of debauched killing that you’d think only existed in horror movies. Pregnant women with their babies cut out of their stomachs. Men were sliced with knives from their genitals to their throats. Children had their skulls cracked wide open. Corpses were mutilated.

And ‘Israel’ was in the thick of it, not merely overseeing it but directly participating with IOF commandos embedded in the ranks of their proxies and IOF gunnery operators shelling any soul who somehow got away from the butchery. They encircled and sealed off the camps so the carnage didn’t stop. Sharon (Scheinermann), Begin (Biegun) and Shamir (Yezernitsky), the architects of the mass murder, never paid for their crimes in this life. Thankfully though, they’re all now roasting ruthlessly in Saqar while the victims of Sabra and Shatilah are with their Lord (SWT), His Holy Prophet (S.A.W.W.) and His Martyrs (R.A.) in peace.

Think about the atrocities and depravities just described. What comes to mind? If your answer isn’t Ashoura, the 10th day of Muharram, then you’re not pondering hard enough. Imam Hussein (A.S.) and his Caravan were surrounded on every side by Yazid’s (L.A.) mercenaries with zero possibility of escaping. Aba Abdallah (A.S.) himself was tortured and beheaded. His children were maimed and murdered. The women among his partisans were violated before being exterminated. The survivors were forever traumatized though they persevered to sustain the legacy of resistance of Sayyed al-Shouhada (A.S.), like Imam Zayn al-Abideen (A.S.), who cried everyday for two decades to mourn his father and his Ashoura compatriots. The stain of blood and scent of murder permeate Karbala’s sands to this day.

Meditating on all of this, it wouldn’t be farfetched to say that ‘Israel’–the absolute Yazid (L.A.) of our time– and its Phalangists–let’s call them the Army of “Christian” Zionist Shimrs–were using Ashoura as a blueprint in their wanton slaughter of innocents at Sabra and Shatilah, whose streets still reek of death as of right now. After all, we know that ‘Israel’ studies Islamic theology, eschatology and history so it can pervert them and use them to spread fitnah. And those very innocents we brought up, whether they knew it or not, were invoking the Mouqawamah and Sumoud of Imam Hussein (A.S.) and the Karbala 72 by staying on their land and refusing to submit to the occupation of the ‘Israeli’ enemy. Even if it meant being disconnected from life.

That the anniversary of Sabra and Shatilah this year falls right in the midst of Muharram’s first ten days presents the chance for us to reconcile each of the two tragedies and fuse them, turning them into invocations of outrage and a rallying cry to mobilize like-minded, Anti-Parasitic individuals against oppression, tyranny, occupation, colonization and hegemony. As we say often: Remembrance is Resistance.

‘Israel’ and its tools, whether it is the Phalangists of yesteryear or the Takfiri Goy Golem of today, as well as its partners like the megalomaniacal, anti-Shi’a, crypto-Jewish Saudi autocrats, can kill civilians across our region and pretend that such crimes provide security. But in reality, all they’re doing, is delaying their inevitable demise while ingraining militant opposition to their felonious power in the hearts of the pure and Godwary. And when we remember what the Zio-Tumor and whoever serves it did to our people, be they in occupied Palestine or Sabra and Shatilah of Lebanon, Yemen or Syria, Iraq or Nigeria’s Zaria, Iran or occupied Kashmir or beyond, we are pushing back against the drive of the “chosenites” to erect their JNWO on our corpses. We’re putting an imprint on the DNA of the aeons that we shan’t be forgotten.

When we scream “Labaykah ya Hussein (A.S.)!” and “Labayki ya Zaynab (A.S.)!”, we aren’t merely immersing ourselves in the simultaneous, somewhat paradoxical agony and victory of Ashoura 1,338 years ago. Beyond that, we’re declaring that Karbala breathes in every oppressed nation and every oppressed person and that Ashoura is a mindstate of counter-despotism, not solely an excruciating incident in Islamic (and human) history. Sabra and Shatilah are Karbala. And their martyrs are the martyrs of a struggle that has raged between the Imam Hussein (A.S.) of the age and the Yazid (L.A.) of the epoch every year, decade and century since 680. We commemorate their sacrifices today. So tomorrow… We can ink their names in ruby calligraphy on the domes of Sakhra and Aqsa when we send ‘Israel’ to the grave–a fate it was destined to have from the very millisecond it abominably came into illegitimate existence.