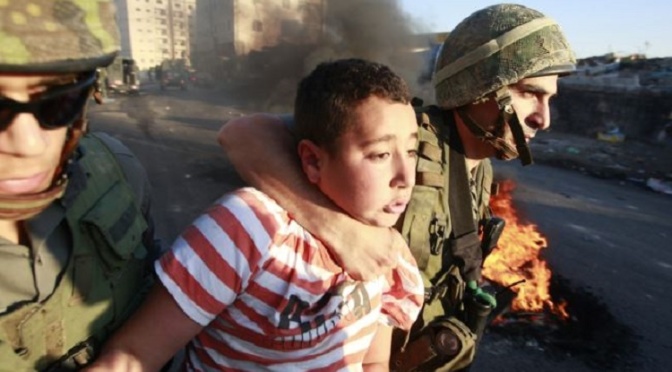 Palestinians say the Israeli regime has detained some 10,000 Palestinian minors in the occupied West Bank and East al-Quds (Jerusalem) since the year 2000.

An official from the Palestinian Liberation Organization (PLO) made the announcement on Wednesday, adding that the inmates’ rights are “regularly” violated by humiliation and torture.

“Israel does not provide any immunity for children and regularly violates international agreements on children’s rights by humiliating and torturing them and denying them fair trials,” Issa Qaraqe, head of the PLO’s committee on detainees, said in a statement.

The announcement came on the 25th anniversary of the adoption of the Convention on the Rights of the Child by the UN General Assembly.

Since June, Tel Aviv has arrested around 3,000 Palestinians some 30 percent of whom are children, Qaraqe said.

The minors, 95 percent of whom are subject to beatings and torture, are forced to confess under duress, he noted.

Currently, at least 300 children are kept behind bars, most of whom were arrested in East al-Quds, Qaraqe stated.

The announcement followed weeks of tension between Israeli soldiers and Palestinian worshippers over the Israel-imposed limitation of access to the al-Aqsa Mosque.

According to the Palestinian Ministry of Prisoners’ Affairs, more than 7,000 Palestinians languish in Israeli jails.