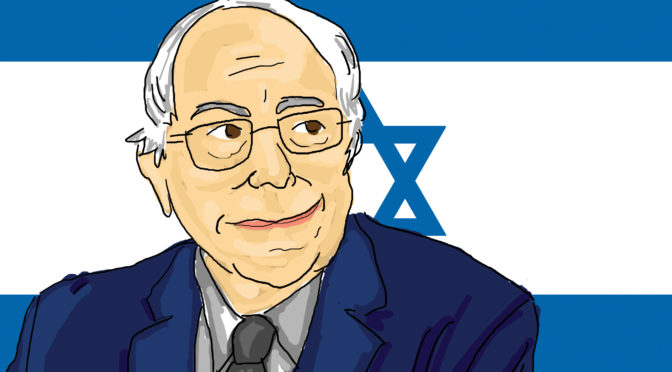 LMAO! So Zionist Bernie Sanders wants to “expose” and “get to the root cause” of the Saudi role in the 9/11 attacks now?! Hilarious! If there was anymore proof you needed that this Western-‘Israeli’ mainstream media fiasco about Al-Saud and 28 pages of redacted documents was fishier than a sushi mega-market, then this little nugget is the cherry AND the pool of chocolate syrup on top of the sundae.

Bernie Sanders is the same two-faced liar and hypocrite who voted for “regime change” in Libya; who thinks Syrian President Bashar al-Assad is the main party responsible for the destabilization of Syria and says he needs to be “phased out”, i.e. overthrown; who has vowed to continue Obama’s disturbing love affair with drone strikes on the innocents of the Arab-Islamic world; who has never seen an ‘Israeli’ crime against humanity he ain’t like and hysterically defended the 2014 Gaza massacre in particular; who has fully backed the Wahhabi tyrants’ genocidal aggression against the Yemeni people and has gone on record more than once saying Al-Saud needs to be EVEN MORE ASSERTIVE in our region than it currently is; who says “all options are on the table” to keep Iran in check and has previously condemned Ayatollah Sayyed Ali Khamenei for “anti-Semitic” rhetoric and has also voted for a bill condemning Tehran for “undemocratically controlling elections”; who has condemned the righteous Lebanese Islamic Resistance of Hizbullah and the Palestinian Mouqawamah as “terrorist organizations”; and who, as if it wasn’t evident enough, stayed on a kibbutz in his youth and maintains complete committed to the usurping Zionist entity’s ongoing putrefying existence today.

Considering all of the above, does anyone in their right mind think that Bernie Sanders, this seemingly great, shining champion of 9/11 truth, will also tell his loyal (read: lemming-like) supporters to “expose” and “get to the root cause” of the all-encompassing Jewish-Zionist-‘Israeli’ role in the 9/11 false flag too? FAT MUHFUCKIN’ CHANCE. I’ve said it before and I’ll say it again: If you’re banging on about the Saudi despots’ limited participation in the ritualistic Judaic massacre on September 11th, 2001 while obfuscating or totally burying the architectural Zionist role, you are a shill for the Jewish Power Configuration. And Sanders is among the highest-ranked of such shills. He’s just going along with the scam as part of the Zionist PSYOP to have both spheres of media, mainstream and alternative, talking about anyone and everyone under the sun but the diabolical ‘Israeli’ enemy. I know it may be hard to believe, but no, this Zionist Jew is not gonna save y’all nor our region from the schemes of the Zionist Jews, aiight? Get your goddamn heads outta the goddamn sand.