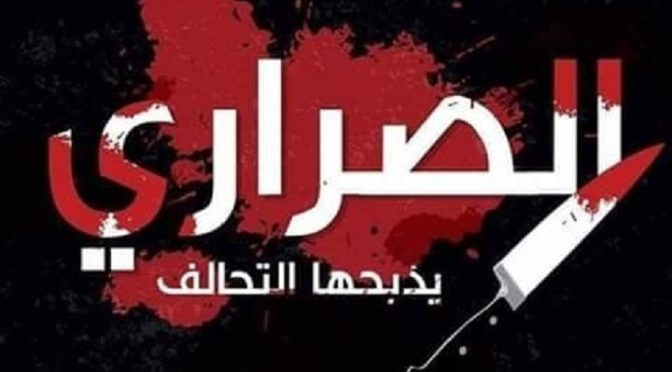 Yemen, o’ beloved Yemen, how I hate your enemies so! The Arab world’s poorest but MOST RESISTANT nation has suffered three despicable atrocities in the past 24 hours and as entirely expected, US-Zionist-GCC media outlets have not only fallen into dead zones but tried to cover up the crimes of Dönmeh Saudi Arabia through the usage of sectarian hasbara. Yesterday in Sanaa, a grenade was placed inside a mosque in Sanaa’s south, slaughtering at least 3 Yemenis and wounding over a dozen more. Not too long thereafter, in Ta’iz–where Ansarullah has been particularly fierce in mopping the floor with Al-Saud’s occupation army–an UNSPEAKABLY SICKENING massacre occurred when the Saudi regime’s mercenaries invaded the village of Sarari and burned dozens of houses to the ground, murdering at least 50 innocents, among them women, children and elderly. Some who survived the arson, crawled out of their fire-engulfed homes in an attempt to escape, only to have their limbs and heads cut off by the Saudi-led invaders and their Hadi-loyalist proxies. Such savagery cannot be put into words, no matter how fury-filled. And then today, a car bomb went off inside an open market in Ma’rib City, taking the lives of at least 7 Yemeni civilians and injuring over 18 others.

The Western-‘Israeli’-Khaleeji press is actively rationalizing these acts of inhumanity by describing Sanaa, Ta’iz and Ma’rib as “Houthi-controlled” or “Houthi-occupied”, the mosque bombed as “Houthi-affiliated”, and each and every one of the martyrs as “supporters of the Iranian-backed Shi’a militia”, with very little variance. The message of the Zionist-owned, Zionist-run MSM, one that shares identical parallels with coverage on Lebanon when a civilian area is bombed by the ‘Israelis’ or Takfiris then described as a “Hizbullah stronghold”, is simple: Murdering Yemenis with terrorist attacks, arson and knives is ABSOLUTELY ACCEPTABLE because they stand with the men defending their nation against aggression, because this Mouqawamah is Zaydi Shi’a, and because this Mouqawamah is backed by the Islamic Republic of Iran–and such support mind you is GROSSLY exaggerated to fit a Yahoudling-Wahhabi narrative of “Iranian hegemony/expansion in the Arab world”. Indeed, Ansarullah is an independent Resistance organism that takes orders from NO ONE and the Yemeni-Iranian bond is one of brother working with brother, not slave working for master.

What we’re seeing is the Zionist media’s Doctrine Of Dehumanization at work yet again. If Yemenis would just stop resisting, accept the US-Saudi project and normalize with the ‘Israeli’ bacteria, not only would the war end, but their dead would be held up on pedestals in the capitals of Western ZOGs worldwide. But since the Yemenis and their Remarkable Resistance aren’t cognizant of the word defeat and are victorious on every front–which includes both sides of the Yemeni-‘Saudi’ border–such a scenario is beyond wishful Zionist-Imperialist thinking, it’s downright delusional. Yemen is not going to submit, nor is its Resistance going to sit idly by and allow such horrors to unfold without the harshest, most thunderous response. Expect a hundred storms of Zelzal-3s, Toshkas, Striking Stars and Qaher-1s on the heads of your cowardly men “King” Shaytan Salman! And to the martyrs of Sanaa, Sarari and Ma’rib: We mourn you, we adore you, and we will honor you by struggling on in your name until our whole region, from your precious Yemen to my Iraq and beyond, is free of the Saudi-Wahhabi virus.