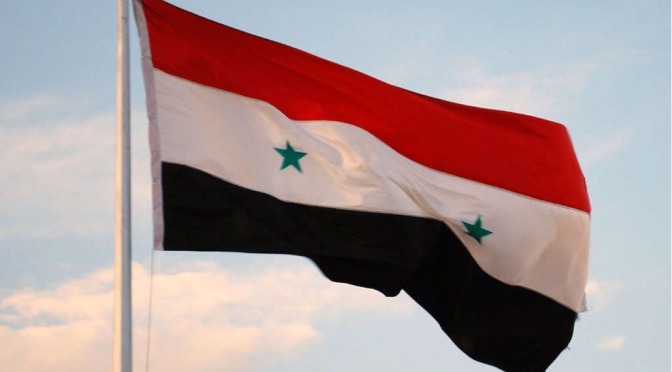 Who else loves the hell out of the Syrian Arab Republic?! 😀 Damascus has just announced, via a message couriered directly to the ‘Israeli’ enemy by the Russian Federation, that any ‘Israeli’ military intrusion into Syrian airspace will see SCUD missiles fired deep into colonized ’48 Palestinian territory. Taking a page right out out of Hizbullah’s playbook, the Syrian government added that should Syrian civilians be attacked by the ‘Israeli’ war machine’s fighter jets, occupied Haifa’s port and petrochemical plant will then be targeted with SCUDs too and the projectiles will be fired without notice. Can I get an “ALLAHU AKBAR!” please?! 😀 The Jewish usurpers shouldn’t take this warning as an idle threat. Going back to September ’16, whenever ‘Israeli’ warplanes and drones have illegally entered Syrian airspace, either the Syrian Arab Republic or Hizbullah have fired on them and blown them outta the sky. And it is for this reason that the usurping Zionist entity is sweating bullets.

Syrian Ambassador to the UN Dr. Bashar al-Jafaari, a man who never ceases to wow and enlighten whenever he speaks as well as one of the finest diplomats of the modern era, recently said that at the very onset of the Zio-Imperialist-orchestrated “revolution”, the Takfiri terrorists targeted and disabled Syrian air defenses. It is only in the last several months that the Syrian Arab Army, working side-by-side with Russian and Iranian military engineers, have been able to reset the systems–hence why the artificial Jewish regime’s warplanes are getting shot down with frequency. This isn’t merely the umpteenth confirmation that the destabilization of the Syrian Arab Republic is an ‘Israeli’ scheme first and foremost, it is also a reminder that like the South Lebanese Army that served ‘Israel’ during its barbaric occupation of Lebanon, the Takfiris, be they the FSA, Nusra, Daesh, Ahrar al-Sham or any other gang, are Zio-auxiliaries and are in Syria solely to serve an ‘Israeli’ stratagem. And lest we forget who aided these “rebels”: Turkey, Saudi Arabia, Qatar, the UAE, Kuwait and Jordan. So-called “Muslim” states. So-called representatives of “The Ummah”. What a sham. What a disgrace. What a vile insult to Islam.

To you “Muslim” Brotherhood fanboys, let’s conclude with an unequivocal elucidation of the matter: While you ingrates were fawning over your “Custodian of the Two Holy Mosques”, the tyrant who owns Al-Khanzeera and “Sultan” Erdogan as they were funding, arming and training terrorists on the Zionist occupiers’ behalf, the Syrian Arab Army was funneling weapons to the Palestinian Resistance alongside Hizbullah and Iran. Historically, while your organization and the regimes funding it have served the Empire, the Syrian Arab Republic has aided the resistance organisms of Palestine and Lebanon lock, stock and smoking barrel. In the Holy Qur’an, ALLAH (SWT) says in the 9th Ayah of the 39th Surah of Al-Zumar, “Are those who know equal to those who do not know?” This Divinely-mandated principle applies here in full: Are the ones who resist ‘Israel’ equal to those who collaborate with ‘Israel’? Not even close. As we’ve said many a time throughout the conspiracy against Damascus, this is not a sectarian war based on the false dichotomies of Sunni vs. Shi’a or majoritarian vs. minoritarian. This is a political war between those who uphold the Palestinian cause (Syria and its allies) and those who have sold the Palestinian cause down the river (the Takfiris, Turkey and the “Arab” dictatorships).

Indeed, Syria differs greatly from the Wahhabi trash occupying its ancient land. In fact, they aren’t even in the same multiverse. Syria towers over you clowns and mops the floor with you. Syria’s name shouldn’t even be on your corroded lips. Syria honors civilization, you cast dirt upon it. Talmudic dirt, that is. When the Golan Heights and Palestine are liberated, the bullets and missiles that will send the Jewish settler filth running back to whatever demonic holes they crawled out of WILL BE SYRIAN. The ones who will be lending a helping hand to the Jewish settler filth as they run for their cockroach-like lives will be Khaleeji and Turkish. Let that sink in the next time you Ikhwanji pieces of animal mess dare THINK of uttering another lie about the Syrian Arab Republic led by Syrian President Dr. Bashar al-Assad and the sacrifices Syrians have made in the fight to remove ‘Israel’ from the map for the last 50 years. And on that note… One last thing: DIE OF RAGE TAKFIRIYEEN! AND LONG LIVE ANTI-ZIONIST SYRIA!