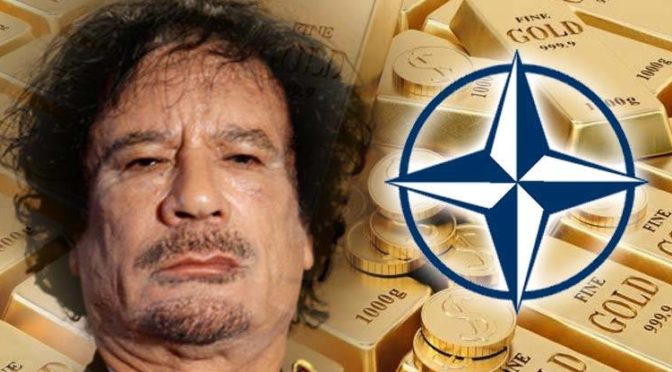 With the circus that is the US presidential election just about over, I look upon the hideous, lizard-like, psychopathy-filled face of Zio-Killary–a mug so ugly it makes the dying wish they were dead already and the living wish they were never born–and there are only six words that my brain seems to be able to process: “We came, we saw, he died.” This is what Secretary of State Succubus said after Muammar Qadhafi, the Pan-Africanist godfather of the Libyan Arab Jamahiriya, was bombed by NATO and ruthlessly tortured, raped and murdered by Takfiri Libyan rebels on the Zionist-NATO-Saudi-Emirati-Qatari alliance’s payroll.

While the Zionist media entertains the lemmings, sheep and “Goyim” that the American people have been converted into by the Jewish Power Matrix that controls the US from the top down, the real scandal is not Donald Trump’s alleged sexual harassment victims–women who are not in fact victims at all but money-grubbing pawns trotted out as weapons in the usual dirty tricks of the Clinton Machine–nor is it even the Wicked Wench of Zion’s email leak and its contents. What should be the topic instead, a true scandal of the ages, is Green Libya and what Zio-Killary did to this frontline state which was once known as the “Switzerland of Africa”, or, in less Orientalist terms, the Jewel of the Maghreb. Now, what Qadhafi built has vanished in a cloud of billowing smoke left behind by NATO’s white phosphorus and cluster bombs. Now… All that remains is a Takfiri terrorist hellhole where the only law is lawlessness and the only order is that which is enforced on the say-so of this or that “emir” in the pay of Mossad, the CIA, MI6 or the Khaleeji tyrants.

Where a home used to be considered a natural human right, tens of thousands of Libyans are now internally displaced. Where there was once free electricity, education and health care for all, now there are only beheadings, car bombings, suicide attacks and intra-militia civil war. It was free to start a farming business, petrol was an extraordinary $0.14 a gallon and a portion of all external oil sales were directly credited to Libyans’ bank accounts. Now, terrorists in Cyrenaica leased occupied Libyan Army bases to the cancerous Zionist entity’s Mossad and many of the oil-rich regions were turned over to the friends of Libyan-‘Israeli’ Jew Raphael Luzon, a vulture who returned to Libya after Qadhafi’s murder and has turned the wartorn nation into his own personal financial playground. Moving along, newlyweds were given $50,000.00 to buy their first apartment, new mothers were given $5,000.00 and Libyans who couldn’t find schooling at home were taken care of by the state to go abroad. Libya also had the best women’s rights record in Africa. Now, Libyans, most especially women, have nothing but the fear over whether or not some hateful sectarian gang unleashed upon them by Zio-Killary, including ISIS, is going to slaughter them and their family in what even remains of their homes.

Lest we also forget the Great Manmade River, formerly the world’s largest irrigation project. It was maliciously destroyed by NATO firepower, thus cutting off the entirety of the Libyan people from water needed not only to quench thirst but grow crops. Unlike the lying Zionist thieves in Palestine, Qadhafi actually DID “make the desert bloom”, but the reign of flowering is no more. Libya had no Rothschild-controlled central bank, but its own currency, gold dinars and silver dirhams, and had zero, absolutely ZERO foreign debt, so it offered its citizens loans without a lick of interest. In reserve, Qadhafi had 143 tons of gold and give or take the same amount of silver. He had plans in the works to make this a continental project to take the whole of Africa out from under American-British-French-Italian boots and forge a new path of independence. Qadhafi refused to join AFRICOM and boldly attempted to undermine it from an intelligence angle by financing an all-Africa telecom-satellite project that would end the NATO allies’ domination of the continent. Now, all of that is a dream within a dream and Libya is the first colony of Empire Judaica’s AFRICOM and the slave of the three-headed predator of International Jewish Capital (the World Bank, the IMF and the European Bank of Reconstruction and Development). And Zio-Killary, along with countless putrid House Muslims and House Arabs fawning over her, still call this certified nightmare a “revolution” with total shamelessness.

Yes, the “Feb17 Libyan Revolution” was a massive legerdemain; a massive legerdemain foisted upon the world by Zio-Killary and one which still haunts the globe to this very moment, not merely due to the “refugee crisis”, but because the destabilization of Libya ultimately led to the assault on Syria, with many Libyan Takfiris making their way to Bilad al-Sham to participate in the felonious “regime change” campaign against Syrian President Dr. Bashar al-Assad. Egypt, Tunisia, Algeria, Niger, Chad, Mauritania, Nigeria and Cameroon are all suffering because of how waste was laid to Libya and how Qadhafi, a bulwark against Saudi-funded Wahhabi-Takfirism across Africa, was criminally assassinated. Libya and Africa are bleeding from just about every pore and while Obama will assuredly rot in Jahannam until the end of time for his role in these massacres and aggressions, Zio-Killary was and remains the hawk and the driving force behind all the chaos. She made that clear herself when she cackled, “We came, we saw, he died.”

Hasbara be chucked out the window. Zio-Killary isn’t the candidate of “feminism” and “women’s rights”. She is not the champion of “social justice” and “liberalism”. And she sure as hell is no “democrat”. She is the Spawn of Satan. The Hellhound in High Heels. The Rotten Royal of Ruin. And the Matriarch of Mayhem. She and her cronies Judaically killed Qadhafi, jacked his gold, juxed his oil and turned what was the wealthiest nation in Africa and one of the most stable nations on Earth into something out of a sci-fi-derived, post-apocalyptic dystopia. If this menace to all life on this planet, this loyal agent of Al-Dajjal’s neocons and neolibs, attains the US presidency, there will be more Libyas to come. You ain’t gotta be a fortune teller to know that it’s a foregone conclusion. May ALLAH (SWT) give us strength, most especially Zio-Killary’s Libyan victims who we hope and pray can one day overcome their torment at this warmongering witch’s hands and make their homeland… Green again.

5 thoughts on “With The US Presidential Election Nearly Over, Never Forget What Zio-Killary Clinton Did To Libya”