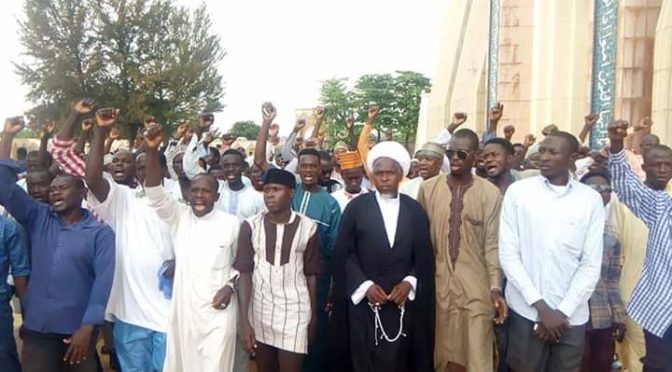 And Buhari, the lying, murderous, collaborationist bag of worm-ridden dirt that he is, should heed the demand of the righteous. That Shi’a Muslims and Sunni Muslims marched together for the Sheikh is a victory too critical not to highlight and celebrate. It reflects a defeat of Zionist-Saudi propaganda that aims to divide Nigeria’s Islamic population. It reflects a defeat of the Buhari regime for it shows that not only are the Nigerian Shi’a refusing to let their leader fade away into nothingness, Nigerian Sunnis aren’t letting their comrades go through it alone either. And it reflects a defeat of the US-‘Israeli’ Empire’s scheme to keep Zakzaky and his people silenced. We’ve seen such displays before, particularly from heartfelt Nigerian Christians who Zakzaky has bonded with through the years.

Indeed, Nigerians from all backgrounds love the Lion of Zaria for he is an incorruptible personality who loves truth and hates falsehood; who strives for what is right and fights what is wrong; who stands FOR the oppressed and stands AGAINST the oppressors. The kind-natured and the pure-spirited gravitate towards Zakzaky because he is everything Imam Khomeini (R.A.) wanted to see already-good men become after being touched by the Islamic Revolution: Great. Saintly. A force of nature. The Islamic Movement of Nigeria’s grandsire is all of this and then some. Hence why such gravitation from people of all ethnic groups and theological backgrounds continues. And the Zionist Jews and their Imperium… No matter how much wealth they have nor how arrogant they are… Can’t stop gravity. ALLAHU Akbar. With the despotic Buhari regime delaying Zakzaky’s hearing in the Kaduna High Court to buy more time to get American approval for an assassination of the Sheikh–la sama7 ALLAH (God forbid)–the joint Sunni-Shi’a protest at Nigeria’s national masjid is as timely as it is powerful. It’s also a call to arms. No matter who you are or where you’re from… No matter if you’ve spoken up for Zakzaky before, recognizing his Husseini light, or you’ve been silent… No matter your politics or your ideology… If you are a person who despises injustice with every atom that comprises your person, then raise your voice for Sheikh Ibrahim Yaqoub al-Zakzaky. Declare your solidarity with him, his wife, his movement and clamor for his immediate release from the corrupt Nigerian government dungeon he’s been kept in for the last 34 months. If you’re a human being with a moral compass, you must. Because there is no freedom for any of us until the freedom of the Khomeini of Africa is secured.