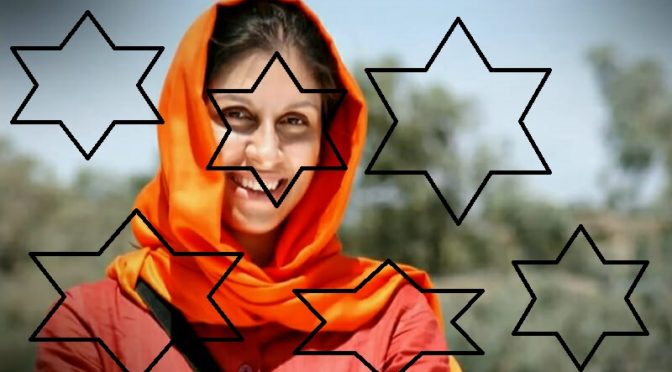 Documents released by the Iranian Judiciary confirm that the two outfits Zaghari was representing, BBC World Service and the ZigZag Academy, weren’t merely pursuing the teaching of journalism on Iranian soil. Their goals were to train and recruit human resources as well as to deploy undercover reporters (read: agents/assets) to gather intelligence on Iranian government and military positions and activities. Zaghari was involved with the British Training Station (BTS), where SAS and MI6 officers are known to congregate, and had been prepared to implement at least three separate Zio-Imperialist projects against the Islamic Republic–all aimed at cultural subversion or the outright toppling of Wilayet al-Faqih. Moreover, the BTS is funded by USAID, the coup-making cog that has long been a front for CIA operations for decades. Zaghari’s codename for these undertakings was “Parisa”.

It’s imperative to note that BBC World Service itself is funded by the American ZOG’s State Department and works closely with the NED, the brainchild of Jewish CIA demon Allen Weinstein. The kicker is that Zaghari was employed by the Thomas Reuters Foundation too, an outfit funded by George Soros and intimately linked with his Open Society Foundations, with a special interest in the African continent. UK regime connections? Check. US regime connections? Check. Zionist connections? Check. So throwing caution to the wind and the gnashing of teeth by Chaim and Moshe Inc. with it, what does that make Nazanin Zaghari? A UK-US-Zionist spy. Call a thing… A damn thing.

While the Basijis and Guardsmen who initially detained her clearly smelled a cheese-eating rat, it was the Unknown Soldiers of Imam al-Mahdi (A.J.T.F.) who cracked the case wide open with the majority of the aforementioned revelations. Verily, their work is never done, nor can it be saluted enough. Cry not for Nazanin Zaghari. Cry not even a tear. Her cover story of entering Iran to visit family and to teach journalism is as fraudulent as fraudulent gets. As the facts above show. She’s the worst kind of subverter. A Khalto Habiba. A House Brown. A coconut. A sellout. A Kosher Persian. A Shabbos Goy extraordinaire. She partnered up with her homeland’s former colonizer and current tormentors to overthrow a government that restored the people’s will and reconnected them with Islam after the godless, secular-extremist despotism of the Shah regime had kept them under its Zionist-provided jackboot for nearly three decades.

Understand how the NGO-industrial-complex–the Empire’s soft power mechanism–works. They’ll call it “human rights” or “equality” or “journalism” or “protesting” or “activism”, but what all these buzzwords mean is “Mask of Zion”–proxies of “Tel Aviv”, Washington and London covering their true faces so the war against what Imam Khomeini (R.A.) built continues by whatever means are at their shaytanic disposals. Iran is besieged from every side by every shade and flavor of Nazanin Zaghari. The “hikers” from about a decade ago, including the ‘Israeli’-Iraqi Jew Joshua Fattal? Spies. Kavous Seyed Emami (L.A.), allegedly campaigning as an “animal rights activist” for the Asiatic Cheetah? Spy. Mohammad Ali Taheri, the “spiritual healer” with his Erfan Keyhani cult? Spy. It goes on and on… TRUST. Subhan’ALLAH, that the Islamic Revolution still stands, thrives, and looks towards a future without Zio-Imperialism, is proof beyond proof of its righteousness and Divinely-mandated purpose. Sit and spin on it, Shlomo. Espionage and hasbara just doesn’t cut the mustard. Iran, or as you’d call it, “Amalek”, ain’t going anywhere.