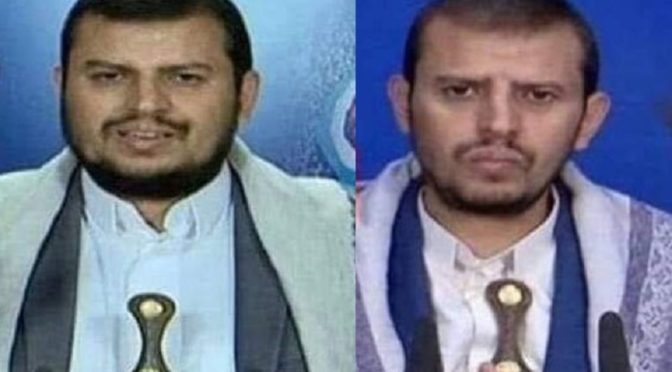 Compare Yemen’s Sayyed to the gluttonous and traitorous bag of slime Abed Rabbo Mansour Hadi, who traipses around Europe and the Khaleej wining and dining with imperialist officials in Michelin-starred restaurants. While his people starve. While he offers his approval to Riyadh, Abu Dhabi, Washington, London and “Tel Aviv” to continue bombing and butchering his people. While his people are overrun with Al-Qaeda and ISIS terrorists that Ansarullah had in check before the illegal invasion. While his people are ravaged by cholera.

And yet the “geopolitical analysts” and Sorosite “activists” bestow legitimacy upon the likes of Hadi, who has ZERO popular support, whilst bestowing illegitimacy on Abou Jibreel, who has ALL the popular support and his whole nation on his back. They speak of a “civil war”. They ramble about “both sides”. We throw our sandals at their false dichotomies. The only war is the illegal one launched by Al-Saud with traitor Hadi’s help on behalf of ‘Israel’. And there is only one side that is just and upright–that which Sayyed Abdul Malik al-Houthi, in all his starving glory, stands upon. Indeed, it gets no more LEGITIMATE than a leader enduring bombardment and famine side by side with his people.

Beyond the likes of Hadi and his fake regime, can anyone imagine the likes of Muhammad Bin Salman, the UAE’s Nahyan and Maktoum, the Sabahs in Kuwait, the Thanis in Qatar, the Khalifas in Bahrain or the degenerate Sultan in Oman walking through this sort of excruciation? Not a day in their pompous, pampered, privileged, pusillanimous lives. Not ONE… DAMN… DAY.

Ansarullah’s fearless Commander-In-Chief however, does so like it’s his duty; does so with pride; does so with a smile; does so with thanks as if it was a gift from ALLAH (SWT), like Lady Zaynab (A.S.) when she stood before Yazid (L.A.) and told him that in regards to what took place in Karbala on Ashoura, she “sees nothing but beauty”. Verily, Sayyed Abdul Malik al-Houthi is the Empty Stomach Zayd (A.S.) of our time; the Malnourished Mukhtar (R.A.) of our age; the Yemeni manifestation of Abou Fadhl al-Abbas (A.S.), only he runs towards the enemy not with a parched mouth from denial of water but a growling and contorted belly from denial of food. A faith that puts all other faiths to shame. A bravery that humbles all other braveries. We will never be worthy of being his soldiers. But we are at his service nevertheless. Our words and our rhymes. Our thoughts and our prayers. And if necessary, our blood and our souls. They’re all his. Ta7ya Yemen! Labaykah ya Sayyed Abdul Malik al-Houthi!