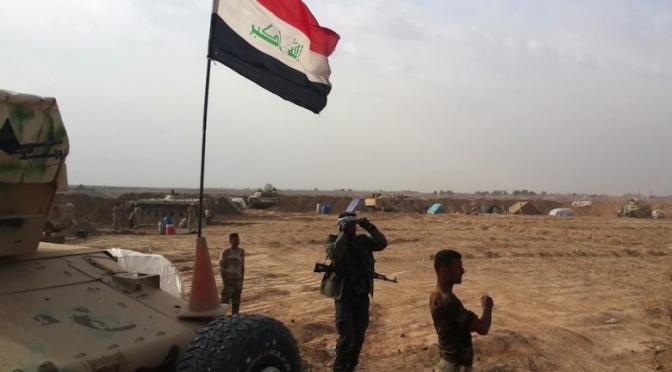 IRAQI UNITY PERSONIFIED! This incredible photo is for every miscreant Al-Jazeera “journalist”, every colonized “Palestine Solidarity Movement” activist, every Wahhabi “scholar” and every Zionist propagandist in the Western, ‘Israeli’ and alternative presses who has had the malicious audacity to accuse the Iraqi Resistance of being “sectarian” in its fight to liberate Fallujah. Pictured here is a Shi’a fighter from the Popular Mobilization Units getting down on all fours so an elderly Sunni woman can use his back as a stool to crawl atop before getting into a truck and fleeing MossadDaesh’s barbarity. Masha’ALLAH. This beautiful act of humanity is a microcosm of the greater Iraqi reality: Young Shi’a lions from Basra, Karbala, Kufa, Najaf, Hilla, Kazimiyeh, Sadr City, Samarra and elsewhere are leaving their homes and families to come to the desert of Sunni Al-Anbar to liberate their Sunni brethen from the Takfiri clutches of ISIS.

In what universe is this even REMOTELY “sectarian”? Some “Iranian-Safavid-Shiacentric project” they’re implementing, huh? The way these “Rafidah” are giving their lives for countrymen and countrywomen of a different Islamic school of thought in the fight against Zionist-Imperialist-backed terrorist garbage really shows how “the Shi’a” are out to “marginalize” the Sunnis, doesn’t it? Beyond despicable, egregious and hasbaranik to the tenth power, such reportage/language is simply downright asinine; such reportage/language is completely ignorant of Iraqi history, devoid of anything substantive and is only utilized by the hegemonic powers to dehumanize and spread fitnah among Iraqis to further the Oded Yinon plan of balkanizing our ancient homeland. But it is of no consequence, because no matter how many lies the Anglo-Zionist media churns out, it cannot break what is made of solid stone. And that is our will, the Iraqi will, and that is our unity, Iraq’s unity as a nation and the unity of Iraqis as a people. We are one hand, holding one sword, delivering one swing, with the intention of landing one strike on the neck of the beast oppressing all of us, regardless of tribe, color, ethnicity, faith or sect. And together, we shall retake Fallujah and restore it to its glory as the gleaming City of Mosques it once was before ISIS and the American ZOG’s invasion prior to that. The sacrifices of our moujahideen have already paved the way.