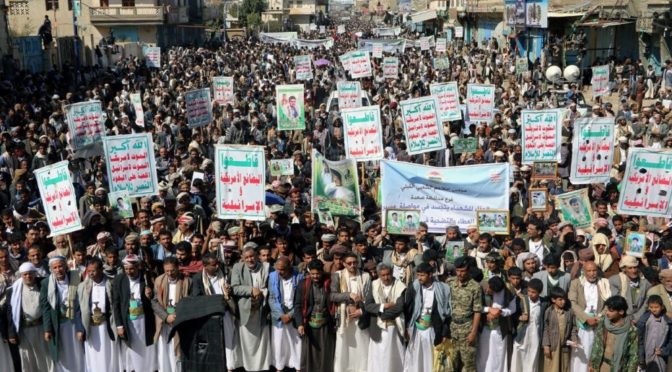 After the Saada School Bus Massacre, in which 51 Yemeni children were slaughtered and 79 other civilians (most of them kids) were badly wounded by Saudi Arabia with US weapons, one of the most chilling scenes to emerge was a Yemeni father – and presumably an Ansarullahi moujahid – holding up the scorched and dusty corpse of his son and screaming, “This is what the American-Saudi coalition has done! Now tell me, what did this schoolboy do? What did he do? What? I swear by Almighty God, you won’t stop our vengeance! I swear by Almighty God, we will avenge these children!” He wasn’t speaking out of rage and sadness. He was speaking out of stern conviction. We’ve reiterated this fact on countless occasions here at Mouqawamah Music and we will continue to do so just to make sure our readers and the world at large get it: The Houthiyeen have never let Al-Saud get away with any of its crimes and they don’t plan on starting now. They avenged Al-Thawra Hospital Massacre in Hudaydah and they’ve done it again today for the children of Dahyan.

Starting on late Sunday evening and moving into early Monday morning, the Yemeni Islamic Resistance went old-school and rained Katyushas down upon Saudi-Emirati invaders in the Masloub district of Jawf. Moroccan, Eritrean and Bahraini occupiers were also among those nailed in the rocketry volley and several Turkish intelligence officers got hit too. In total, at least 68 aggressors were given first-class tickets to the fires of Jahannam and around three dozen other mercenaries of the Empire were wounded. The Katyusha, while an older and less advanced projectile than much of the homemade weaponry we’ve seen Yemen’s defenders utilize in recent months to counter the US-UK-‘Israeli’-backed Saudi coalition of cowards, is still very much reliable and has served Ansarullah exceedingly well. As evidenced by the marvelous display today. Hizbullah of course used the Katyusha to change the rules of engagement with ‘Israel’ in the 90s and we’re seeing Ansarullah follow in the Lebanese Islamic Resistance’s footsteps in this moment to set Riyadh and its treasonous allies straight.

Never doubt the promises made by a brokenhearted Mouqawamist father. He said that vengeance for the child martyrs of the Saada School Bus Massacre would belong to Ansarullah and vengeance is what was delivered. When will the Takfiri tyrants comprehend that these sons of Zayd (A.S.) and Hussein (A.S.) won’t ever be defeated? When will these Wahhabi despots understand that the blood of the Shouhada is not cheap? Riyadh and Abu Dhabi can accept defeat and end the war. Or continue to be beaten down and drown in casualties. Either way, the Yemeni Islamic Resistance is in the driver’s seat.