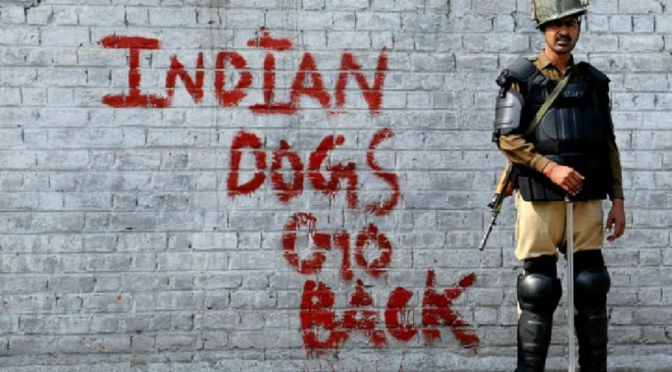 F*** Narendra Modi. F*** the Indian regime. And f*** the Indian occupation army. Since the latest crackdown against the Kashmiri people started on July 9th, AT LEAST 90 women have been raped by New Delhi’s thuggish military. You read that right. AT LEAST 90 women In 39 days. This abominable inhumanity comes in addition to the 80 Kashmiris martyred, the hundreds tortured, the thousands wounded and the thousands more illegally detained under the PSA (Public Safety Act), Section 144 and other Zionist-Orwellian laws. It’s also part and parcel of a policy that the Hindutvadi occupiers have been implementing against the women of Kashmir since 1989. And during these past 27 years, a staggering 10,283 Kashmiri women have been raped by these animals. This is just what’s on file. It’s painful to think how many acts of sexual violence committed by Indian soldiers have actually gone unreported in the Vale.

I would like to see how Hindutva’s mouthpieces–as well as all the Indian “Anti-Imperialists” who incredibly find themselves on the same side as Modi and the ‘Israeli’ tumor when it comes to Kashmir–are going to attempt to blame Pakistan for THESE crimes. Did Islamabad incite the “noble”, Zionist-armed Indian army to rape these Kashmiri women? Or maybe Islamabad “incited” these Kashmiri women to “bait” the “dignified”, Zionist-armed Indian army into raping them? Or perhaps, the rapes never happened at all and this is all just part of Pakistan’s “campaign” against India? It’s f****** disgusting. Absolutely f****** disgusting. There is no other phraseology for it. There is no justification for it. It’s simply a bunch of ultra-nationalists–regardless of their alleged political affiliation–so blinded by their own jingoism that they’re mentally incapable of SEEING let alone condemning the monstrosity right in front of their face. The ‘Israeli’ influence, which centers around a “forever the chosen, forever the victim” worldview, on Indian media, politics and entertainment certainly contributes to this ungodly thinking as well. This barbarically patriarchal, savagely misogynistic, totally systemic nightmare isn’t the work of Pakistan, nor is it part of some “liberal media onslaught” against “Holy Hindustan”, nor is it the goddamn work of the goddamn colonialists.

This is the Indian state being the Indian state, and, in collusion with the usurping Zionist entity, oppressing the living daylights out of the Kashmiri people to maintain its hegemonic position in the Southeast Asia Subcontinent. Rape, like the firing of steel pellets into the eyes of stone-pelting children to blind them, night raids, torture with drills, electroshock devices, motor oil and other atrocities, is a tactic utilized to spread fear and break the spirit of Kashmiris so they accept illegitimate Indian rule. Rape is also one of the reasons that Kashmiri youth graffiti “Indian dogs go back” all over the Valley. And they should. The dogs of the Indian army, I mean. They should go back. And leave Kashmir’s women, men, kids, elderly, disabled and others the hell alone. For their presence has been illegal from day one, they’ve wreaked enough havoc to last a lifetime and it is going to take generations to recover. Yes. “Indian dogs go back” indeed. May ALLAH (SWT) grant supreme strength to all of Kashmir’s rape survivors and their families.