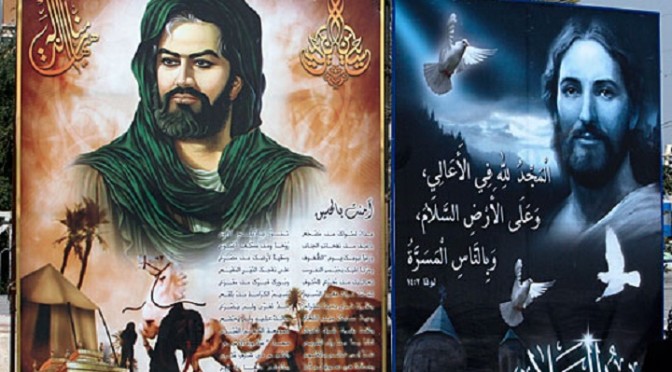 To all my beautiful and brilliant Christian brothers and sisters, heartfelt felicitations to you on the solemn occasion of Good Friday. The pompous, malevolent and parasitic forces that persecuted Jesus Christ (A.S.) 2,000 years ago are the very same demons–the Synagogue of Satan–who are waging war on Christians and Christianity today, whether directly through their occupation of Palestine and their malicious, hateful material routinely released in Hollywood, or by proxy through their Takfiri terrorist vassals destroying churches in Syria and Iraq. These creatures of darkness, who laughably refer to themselves as “chosen”, out of sheer hatred for Kalimatullah (A.S.) [the Word of God; what Christ is called in the Holy Qur’an], are also actively attempting to drive a wedge between those who venerate him–Christians and Muslims–and manipulate us into fighting one another.

It is thus the duty of all those who love and cherish Isa al-Masih (A.S.) as well as his holy and pure Mother Maryam (A.S.) to stick together and stand against Global Zionism and all its machinations. Remember! Christ (A.S.) was not just a prophet, nor just a messenger, nor even just the Messiah, but a rabble-rouser; a revolutionary; a rebel of rebels; a renegade and a torchbearer of resistance who fought the Pharisees and their supremacist hegemony with all his heart, soul and blood. If we do anything less than struggle against the Sanhedrin of today ’till it is toppled, we are dishonoring everything that Christ (A.S.) fought for. So be like the Galilean-Palestinian hero Jesus (A.S.) and resist! And just as he prevailed over the Zionists of his day, for his teachings and love of the oppressed endure in the hearts of 4 billion Christians and Muslims worldwide, we too shall prevail and overthrow the Halakhic-Talmudic Empire of this current age. As Isa (A.S.) himself said, “Dearest children, let us not love with words or speech but with actions and in truth.”