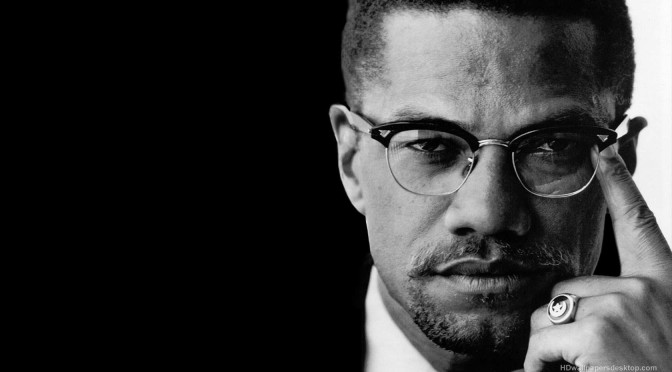 “Eternally Husseini” is less than a week away now people! Y’all ready?!

It was on this day 92 years ago that the greatest revolutionary to ever live in the Western hemisphere was born: Malcolm Little aka Malcolm X aka el-Hajj Malik el-Shabazz (R.A.) If you call yourself a radical or an activist and you happen to be on the microphone or on the boards, then you owe the entirety of your identity and existence to this man. We’d HAVE nothing and BE nothing without Malcolm X, beautifully rendered here yet again by the infinitely gifted, artistically remarkable Mohammad Hamza of Intifada Street. I mention Hajj Malik in both the opening track of the album, “Universal Anti-Parasitism”, and the closing joint, “When The Rocks & The Trees Cry”, but the truth is, I could write entire records about him alone and how much he means to me until the day that ALLAH (SWT) sends Malak al-Mawt (A.S.) for my soul. I’d be dead without Malcolm X. I don’t mean that hyperbolically, nor am I saying it for effect. I write that with all sincerity and with every atom of my being.

The day I was handed his autobiography by my now-dearly-departed mentor Randall Muhammad (R.A.) was the day that my life changed forever. It’s not enough to just say “alhamdulillah!” that this giant–who dwarfs the snakes in the grass who exploit his memory like blue whales dwarf the krill that make up their diet–this legend, this firebrand, this Mega-Mouqawamist like no other, was brought into this world. Although, of course, we do ABSOLUTELY say “alhamdulillah!” for humanity being gifted with such a presence. Still, it isn’t enough to merely be thankful for him and read his blessed writings and listen to his sanctified words. We have to live like him. Fight like him. Or in the case of myself and Hamza, rhyme like him as if Malcolm was an MC and draw like him as if Malcolm was an artist. We must be Malcolmites and nothing less.

Whenever you feel like you’re losing the plot and drowning in the hypocrisy and cowardice of this or that “leftist”, turn to Malcolm X. Do not fall for the tricks of the House Negros, the House Arabs, the House Muslims and other colored proxies of the Anglo-Zionist hegemon. And perhaps most importantly, do not take any liberal Jew–who will only fund and back you as a means of controlling you and your cause and filing your discourse down to nothing but an extension of rabbinical mumbo-jumbo–as your friend or your ally. Hajj Malik, a champion of Palestinian liberation and a passionate anti-colonialist, warned us of all these foul creatures and those warnings hold greater weight today than ever before in the wake of massive Zio-Imperialist PSYOPs like the “Arab Spring”. On Malcolm X’s 92nd birthday, we remember him as a man who embodied Imam Hussein’s (A.S.) legacy in every way, for he not only told uncomfortable truths and confronted the vilest oppressors, he also did not run FROM martyrdom but rather TOWARDS it.

So we depict him with the Zulfiqar Mic-Sword–a metaphor for fearless truth-telling and a fusion of the weapon of Imam Ali (A.S.), the father of Imam Hussein (A.S.), with a microphone, the weapon of yours truly–because nobody wielded the Haqq in such a devastating manner as he did. And if he were here with us today, he would be on the front lines struggling to end World Zionism’s stranglehold over us all BY ANY MEANS NECESSARY. Happy birthday ya Malcolm! May this album and all of our efforts do at least a Karbala sand grain of justice to your incredible, incomparable legacy!! #EternallyHusseiniComingSoon #HusseiniDayMay25th #MaddCold #HipHopHizbullah #HappyBirthdayMalcolmX #LongLiveMalcolmX #WeAreAllMalcolmX