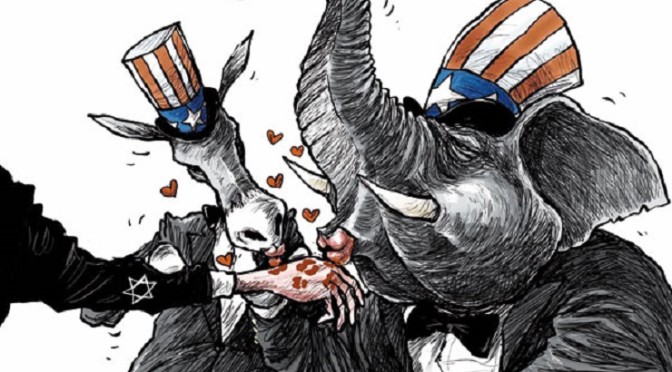 Out of 435 members of the House, only 10 voted against what amounted to virtual authorization for offensive operations against the Russian Federation. The lopsided 411 votes for the resolution suggests that the same Israeli Lobby that racks up similar vote totals in support of Israel and against Iran, were at work with the resolution on Russia. Former Representative and Democratic presidential candidate Dennis Kucinich joined Paul in condemning the House action, referring to the anti-Russia resolution as «tantamount to a Declaration of Cold War». Paul was correct in stating that these sorts of resolutions, billed as non-binding «harmless statements of opinion», often lead to sanctions and war. In addition to House resolutions on Iraq, other resolutions calling for U.S. intervention have been used to justify U.S. military actions in Syria and Libya.

The ten House members who voted against HR 758 represent a small bi-partisan cadre of Republican libertarians who oppose U.S. interventionist policies around the world and Democratic progressives who also oppose the military brinkmanship with Russia advocated by the House resolution. Republicans like Walter Jones of North Carolina, Justin Amash of Michigan, Thomas Massie of Kentucky, John Duncan of Tennessee, and paleo-conservative Dana Rohrabacher of California voted against the bill. Democrats Alan Grayson and Alcee Hastings of Florida, Jim McDermott of Washington state, Beto O’Rourke of Texas, and outgoing George Miller of California joined their Republican colleagues in casting no votes.

Going along with the majority were all the political contrivances that support the neo-conservative war agenda, from the Congressional Black and Hispanic Caucuses, which takes their marching orders from George Soros and «Third Way» Democrats, to the Tea Party Republicans, who are financed by the billionaire industrialists Charles and David Koch and influenced by neo-conservative media mogul Rupert Murdoch. The American Israel Public Affairs Committee (AIPAC) is well known for gathering up sizeable votes, like the 411 who voted for HR 758, to back bills written by AIPAC staffers. Hastings of Florida was the only member of the Congressional Black Caucus to vote no on HR 758. His caucus colleague, the normally anti-war Maxine Waters of California, voted yes.

Not one member of the Congressional Hispanic Caucus voted no on the resolution. Even the usually-progressive Democrat Raul Grijalva of Arizona voted for a resolution that de facto authorizes the United States to supply lethal military weaponry to the putschist Ukrainian regime in Kiev.

There were a few members who opted not to vote, which is a method to abstain. They included Republicans Robert Aderholt of Alabama, Gary Miller of California, Mark Meadows of North Carolina, and Rob Bishop of Utah, as well as Democrats Gloria Negrete-McLeod of California, Michael Capuano of Massachusetts, Carolyn McCarthy of New York, Mike Doyle of Pennsylvania, Jim Cooper of Tennessee, and Pete Gallego of Texas.

It is clear that AIPAC teamed up with various anti-Russian groups, including the Ukrainian American Foundation, the Georgia Caucus, Estonian American National Council and the American Hungarian Foundation and other Soros-funded front groups, to ensure passage of the anti-Russia resolution. This neo-conservative bloc, which supported the $5 billion U.S. price tag used by Assistant Secretary of State for European and Eurasian Affairs Victoria Nuland and her colleague, U.S. ambassador in Kiev Geoffrey Pyatt to overthrow the government of President Viktor Yanukovych, has used its influence in the past to attack Russia.

One of the behind-the-scenes lobbyists who can be relied upon the craft de facto war authorization resolutions in Congress is top John McCain foreign policy adviser Randy Scheunemann.

Scheunemann’s simultaneous work as the Executive Director for the Committee for the Liberation of Iraq (CLI) that helped engineer the U.S. invasion of that country and his work for the congressional Georgia Caucus resulted in a U.S. foreign policy nexus that resulted in 2000 Georgian troops being dispatched to Iraq as part of the so-called «Coalition of the Willing». In fact, Scheunemann’s Orion Strategies lobbying firm, the Committee for the Liberation of Iraq, and the discredited Iraq National Congress of con artist Ahmad Chalabi all shared the same Washington, DC, address of 918 Pennsylvania Avenue, SE, Washington, DC 20003. This same boiler room lobbying operation is being used to rally congressional support for further punitive actions against Russia. It is no coincidence that paragraph 22 of HR 758 specifically states, albeit falsely, that Russia invaded the Republic of Georgia in 2008.

HR 758 promotes the «disarming of separatist and paramilitary forces in eastern Ukraine». The resolution calls for the United States to «provide the government of Ukraine with lethal and non-lethal defense articles, services, and training required to effectively defend its territory and sovereignty». In other words, U.S. and NATO forces are authorized to bring military action right up to the Ukrainian-Russian border.

HR 758 represents nothing more than a foolhardy laundry list of neocon talking points often used by such media operations as Fox News, the National Review, and Newsmax to attack Russia and its government. For example, the resolution condemns Russia for providing arms to the Syrian government to fight against the Islamic State of Iraq and the Levant (ISIL). Of course, AIPAC ensured that the point was included because Israel, for which AIPAC acts as an unregistered foreign intelligence-gathering and foreign government lobbying operation, militarily supports ISIL and its affiliated terrorist groups. Other neocon talking points in HR 758 condemn Russia for hacking into U.S. computer networks. The National Security Agency (NSA), a hotbed for neocon activism, finds it convenient to scapegoat other nations in order to convince Congress to increase its National Cyber Command budget. Depending on the day of the week, NSA will leak information to friendly media about cyber-attacks from Russia, China, North Korea, Iran, Syria, Lebanese Hezbollah, Cuba, Venezuela, and any other country that runs afoul of U.S. interventionist foreign policy. The NSA has become one of the more transparent liars among U.S. government agencies when it comes to manufacturing or exaggerating cyber-threats.

Where do the neocons and Soros intend to take their anti-Russian operations? The answer is found in a 2008 statement issued by the Soros-funded and Central Intelligence Agency-linked K Street lobbying group, the Central and Eastern European Coalition (CEEC). In 2008, CEEC stated that unless Russia withdrew from Abkhazia and South Ossetia, immediate Western recognition of the independence of Chechnya, Dagestan, and Ingushetia should be granted. It added that if that move was «insufficient for Russia to withdraw from South Ossetia and Abkhazia. . . the international community should consider recognizing the independence of other autonomous republics within the Russian Federation, such as Adygea, Altai, Buryatia, Kabardino-Balkaria, Kalmykia, Karachay-Cherkessia, Karelia, Komi, Mari El, Mordovia, Sakha, North Ossetia, Tatarstan, Tuva, Udmurtia, Khakassia, and Chuvashia».

Russian President Vladimir Putin was spot on when he recently stated that the West ultimately seeks the break-up of the Russian Federation. The proof is found in the policy statements of CIA-linked groups like the CEEC, which is also helping to call the shots on anti-Russia congressional resolutions like 758 and sanctions policies.