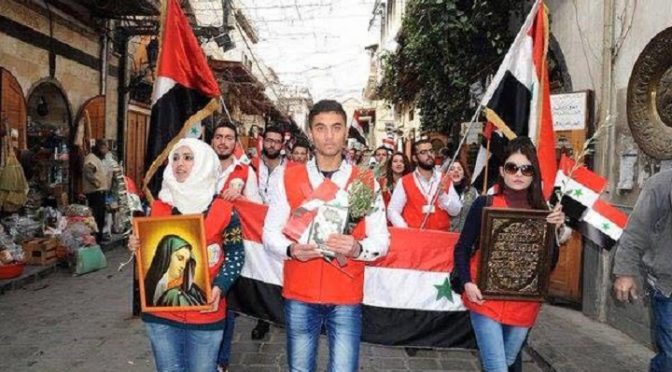 What will not be read regarding the historic, world-shifting victory in Syria’s Aleppo, either in the Zionist-controlled, Christ-bashing, Islam-hating mainstream media, or the anti-spiritual, Zionist-infiltrated alternative media, is that this victory is perhaps FIRST AND FOREMOST a triumph of Islamic-Christian Unity over an enemy which seeks to destroy both the followers of Muhammad (S.A.W.W.) and the followers of Christ (A.S.) From day one of the conspiracy against the Syrian Arab Republic, the global press attempted to frame it in sectarian terms–i.e. “an Alawite minoritarian regime repressing the Sunni majority”–and the alternative outlets tried to paint a picture in neocon-derived “clash of civilization” terms–i.e. “authoritarian but secular regime” fighting “reactionary Islamism”. Both of these narratives are equally false and maliciously so at that, not to mention rooted in the Zionist scheme to see Muslims and Christians opposing one another instead of working together to defeat the Jewish Power Configuration.

Yes indeed, Syria is very much secular and Syrians are proud beyond proud of their secularist identity. BUT! The Syrian Arab Republic is also the Arab-Islamic world’s capital of pluralism and the fiercely pluralistic Syrian people pride themselves on the fact that so many different Islamic schools of thought, Christian sects and other faiths not only coexist but coRESIST. The Syrian Arab Army is multi-communal and multi-ethnic. The NDF is multi-communal and multi-ethnic. Syrian-Palestinian paramilitary groups like Liwa Al-Quds and Fatah al-Intifada are comprised of both Muslims and Christians. Syrian Muslims defend churches. Syrian Christians defend mosques. Syrian Druze defend both. As Syrian First Lady Asma al-Assad once eloquently said, “We all kneel in the mosque in front of the tomb of Saint John the Baptist. That’s how religions live together in Syria—a way that I have never seen anywhere else in the world. We live side by side, and have historically.”

And then when the identities of Syria’s allies are factored into the equation, Christian Russia, the Islamic Republic of Iran, the Lebanese Islamic Resistance of Hizbullah, the Iraqi Islamic Resistance movements of Kata’ib Hizbullah and Harakat Hizbullah al-Nujaba, it is actually tremendously fitting that these forces would come together in Syria, the hallowed ground of religious unity, to ward off the Takfiri terrorist proxies of the globe-holding enemy attempting to liquidate them all–International Zionism. Orthodox Christianity in Russia has roared back to the forefront under Vladimir Putin and the Russian president himself has shown his own commitment to forging an Islamic-Christian alliance with his increasingly close (as well as strategic) ties with Tehran and his presentation of an ancient copy of the Holy Qur’an to Ayatollah Sayyed Ali Khamenei. Russian forces aren’t merely active in Syria on the aerial front, they are on the ground, shoulder to shoulder with the pluralistic SAA, the Hizbullah-trained NDF and Shi’a moujahideen from Iraq, Lebanon and Iran. A melting pot of Mouqawamah and the ultimate recipe for spoiling everything being devised by the sedition-cookers in “Tel Aviv”, Dimona and Herzliya.

The liberation of Aleppo will always be remembered, rightly, as the event which killed the Zionist conspiracy against Syria and expedited the end of the war. But never forget that its significance does not stop there. Aleppo’s newfound freedom will also be the catalyst for the expedition of International Zionism’s total collapse; the moment that the Islamic-Christian alliance solidified its presence as a power to be reckoned with on the geopolitical grand chessboard by defeating World Jewry and its perversions–“Christian” Zionism (aka Scofieldism) and Wahhabi-Takfirism–in totality. Verily, as Idlib, Raqqa and the remaining (almost-microscopic) pockets of terrorism in Hama, Daraa and Rif Dimashq are set to be cleansed of Empire Judaica’s tools, this Islamic-Christian powerhouse–with bases in Damascus, Tehran, Karbala, Kufa, Najaf, Baghdad, South Lebanon, Dahiyeh, the Bekaa Valley and of course, Moscow–is only going to expand its victory.

Muslims and Christians the world over should take note: Stop hedging bets on the broken and entirely fraudulent system of Western Liberalism, a dying, declining hegemony spearheaded by the ‘Israeli’ tumor in Palestine and its parasitic “chosenite” brethren in the US, the UK and other Imperialist capitals. Instead, get behind Syria and its allies, the truest representatives of Muhammad (S.A.W.W.) and Christ (A.S.) on Earth in centuries. And if you need an example of what kind of righteousness the Muhammadi-Masihi, Syrian-Hizbullahi-Iranian-Iraqi-Russian union is capable of… Then look no further than the liberated ancient city of Aleppo. The shine simply could not be any brighter.