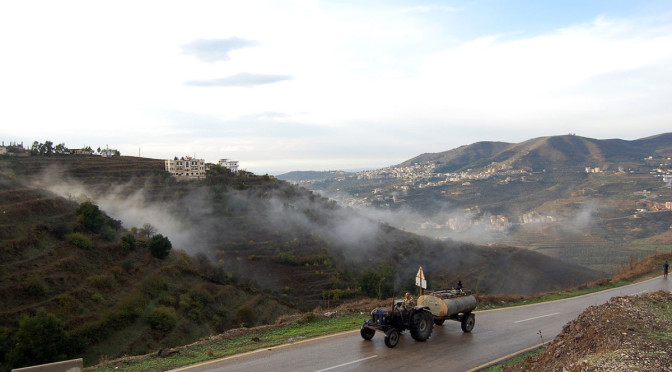 In three months, or March 2015, Syria will enter the fourth year of its bitter internal conflict. Most Syrian provinces have suffered from the ongoing insurgency, seeing battles between the Syrian Arab Army and increasingly fundamentalist insurgents which have left extensive destruction in their wake. But while government troops have managed to turn the tide against the insurgency and are now on the offensive on all but one fronts, the sight of another battle looms on the horizon – the battle for the economy.

According to the UN, the war has claimed more than 190,000 lives; another 5 million have become internally displaced, and more than 3 million have fled to other countries. These figures represent nearly half of the country’s pre-2011 population. Three Syrian provinces – Dimashq, Homs and Aleppo – have suffered extensive damage to their infrastructure and industrial assets. These are also the primary economic hubs of the country. To the northeast, the genocidal self-proclaimed Islamic State has captured almost all of Syria’s oil and gas wells; these installations were consequently targeted by airstrikes of the US-led coalition. Insurgent bombings against vital infrastructure have also contributed to occasional raw material and power shortages.

As a consequence of these events, the Syrian economy – which had a moderate pace of growth and reform before the conflict – has nearly collapsed. The cumulative effect of labour shortages, infrastructural damage and the loss of oil installations has sent the Syrian pound into a freefall. Syrians already suffering from the conflict have found themselves struggling with an inflation spike as a result. The situation is especially dire in areas still outside government control where basic utilities and communal services are scarce or simply non-existent. Healthcare experiences medication and personnel shortages, school attendance rates have dropped significantly and state administration is yet to recover in some of the areas back under government control. Industrial production fell by more than 20% in 2013 alone; gross domestic product has declined as well.

The Syrian government is thus tasked with an enormous problem to solve once the insurgency is put down – it has to revive the well-being of its citizens. Most Western analysts seem to have written off the possibility of such recovery and insist that the country will function as little more than a Russian or Iranian satellite. In a world of ideal predictions this would seem a troublingly reasonable assertion. However, most predictions on the Syrian conflict have proven false, and the economic aspect might be in for yet another wrong prognosis.

The government’s overriding concern should be to bring back all Syrian extraction installations and refineries under its control. Syria’s total oil production is estimated at around 380,000 barrels per day, a large portion of which are reportedly pumped by Takfiris and then sold to Turkey. A number of tribal clans in eastern Syria control smaller wells and sell what they produce to middlemen. Recapturing oil pumps under Islamic State control will require a dedicated military campaign, but diplomacy could be used to bring the numerous tribal families under the wing of the Syrian state.

While many of the country’s oil and gas installations would likely need extensive repairs, even a moderate increase in production will stabilise the economy by providing steady revenue to an already strained budget plagued by a drastic deficit. Export is unlikely, but fuel shortages inside the country could be relieved, reducing transport expenditures for public and private usage alike.

A boost in the value of the Syrian pound will be an anticipated secondary effect. If coupled with other appropriate, well-timed fiscal measures, more options to reduce inflation and slightly increase domestic consumption will be on the table. However, until stability is restored to the entire country, these will remain stopgap measures and will provide no real solution to the country’s long-term economic necessities.

The other major sector of the Syrian economy will be more difficult to handle, but if managed properly, the efforts will pay off in the long-term. The problem with Syrian agriculture however predates the current conflict.

From 2006 to 2010, the country suffered its worst drought in 40 years, prompting hundreds of thousands of Syrians to leave the countryside and head for urban areas. Coupled with the effects of mismanagement and poor accountability, the situation in the agricultural sector was rather dire. Finally, the current conflict has expelled many from their rural homes, leaving the countryside severely depopulated and lacking in labour and equipment.

Government institutions will need to implement not only some costly repopulation programmes, but also carry out thorough structural reforms involving increased transparency, innovative statistical approaches and introduction of more flexible subsidisation mechanisms. It will also need to build extensive irrigation systems and stimulate cooperation between small producers in order to boost output. Syria can also reap enormous benefits from the current chill in economic relations between Russia and the EU. Syrian farmers could replace suppliers of Mediterranean produce from Italy, Greece and Cyprus on the large Russian market.

All of these measures will require significant and dedicated administrative capacity, but their correct application is sure to provide a long-term rise in employment in a sector that is capable of continously generating revenue with relatively little spending. The benefits will extend deeply into society itself, guaranteeing domestic stability through employment for a long time to come.

With Aleppo virtually pillaged by insurgents, most of the country’s industrial sector is in a state of collapse. Even before the conflict, industry suffered from overregulation, a lack of foreign investment and no domestic innovative solutions. Most of the industrial capacity has been looted or damaged during the conflict.

For a country with a relatively well-developed system of primary and secondary education, Syria scores remarkably low in terms of innovation and competitiveness which are vital for industrial growth. The 2010 Competitiveness Report and The Arab World Competitiveness Review 2010 by the World Economic Forum scored Syria second-to-last in the broader Middle East region; only Libya was found to be less competitive. Things have certainly not improved over the next few reports for obvious reasons.

Among the numerous issues of Syrian industry pointed out in these papers, two stood out noticeably: the poor quality of Syrian goods and the low technological adoption in the sector. The causes range from inadequate training of the workforce to outdated higher education practices. These need to be decisively addressed if industry is to recover in a competitive way.

The government must also prioritise higher education in natural sciences and technology in order to create an environment of innovative solutions for the industry. As much as this may sound a nuisance in the current situation, failure to realise the potential applications of cutting-edge research will doom the government to spend precious resources on rebuilding an already obsolete industrial base with outdated practices. Acquisition of new technology from abroad, on the other hand, will be made possible only by cutting down import regulations and taxes while establishing proper cooperation agreements with technologically advanced countries.

Government planners must also take into account the vast amount of destruction throughout the country. Construction will certainly provide a noticeable industrial growth on paper, but this will only last for so long. However, the increase of construction activity will have the side benefit of generating temporary employment and livelihood for many Syrians, especially those displaced and with little specialised skills. Uniting management of displaced persons with agricultural repopulation programmes is absolutely necessary to restore the economy and society.

A war to be won

A fluid situation such as this one will undoubtedly bring about numerous reassessments; some of these measures might suddenly turn out unnecessary, while others may become more urgent than ever. In any case, the government should brace itself for the upcoming economic battle – a silent front that will not erase the memory of this catastrophe for the next generations, but one that will guarantee the wounds will heal much, much quicker.