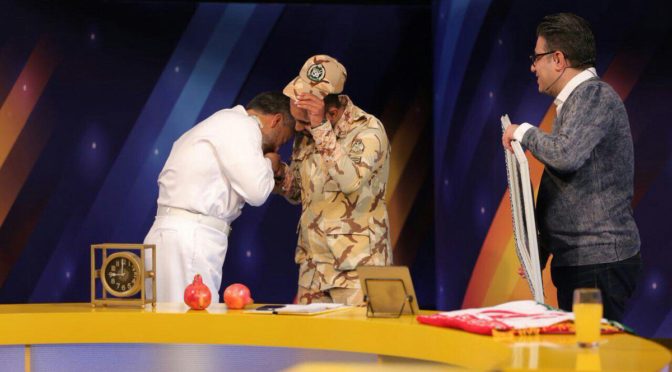 Muhammadi rushed many children and women to safety while also stopping the bleeding of several IRGC commandos who were shot by the ASMLA and ADPF mercenaries. A hero in every sense. That one of the highest ranking military men in the whole of the Iranian security establishment, not to mention a moujahid of the highest order who was instrumental in preventing the fall of the Islamic Revolution during the Imposed War, bows his head and engages in such a gesture towards a soldier of regular rank that diffidently viewed his dauntless actions as merely doing his job in a crisis, is a display of the synergy between the brass and the rank-and-file; the brotherhood that bonds them; and the commitment to Islam that all of Iran’s guardians have, regardless of titles or medals.

This is the humbleness of Imam Ali (A.S.) The kindness of Imam Hassan (A.S.) And the respect and love for the bravehearted of Imam Hussein (A.S.) Terrorist attacks or sanctions, assassinations or proxy rebellions, with the mentality of Ahlul Bayt (A.S.) so deeply ingrained in such modest and courageous warriors, no weapon forged against the Islamic Revolution shall prosper. Zion and its marionettes were expecting Iranian society as well as the various elements of Iran’s defense apparatuses to begin unraveling in the wake of the horror in Ahvaz. Instead, in spite of everything, including the failed presidency of Hassan Rouhani, Iranians have banded together and the IRGC, Artesh, Basij and others are closer than ever before. Striking Star Salute to young Moujtaba Muhammadi and Major General Sayyari. May ALLAH (SWT) brighten their faces so all of us are warmed by their Islamic light and the darkness never again comes close to harming them.