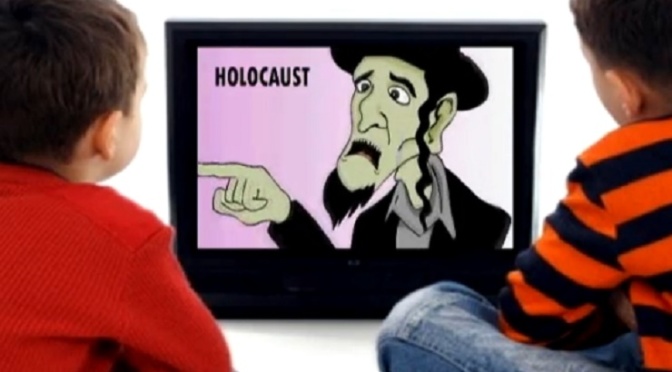 Subconsciously, we become the gatekeepers of this tale, lashing out in fury at anyone who dares challenge its accuracy; who dares challenge what the victors fallaciously wrote in their books after WW2; who dares reject the “chosenness” of THE HOLY SIX MILLION. That is, until we realize something of the utmost profoundness; that The Holocaust and The Six Million are just that… A story. A tale. A great yarn. And let there be nothing but clarity on that note: The Holocaust is indeed one of the great parts of history, but not the greatest CRIME *IN* history. Rather, it is the greatest PERVERSION *OF* history. Everything about it, inside and out, front to back, is a lie. A story. A tale. A yarn. A Jew-yarn! Not a “holocaust” but a holocrock! A holofraud! A holohoax! And truly, what else are we to expect from a people who the Holy Qur’an told us would be cursed into spreading corruption and falsehood throughout this world?

Ayatollah Sayyed Ali Khamenei, our incandescent, guiding and ever-sagacious Magnetic North, outright and fearlessly calls it a “myth”. As in mythical. As in nonexistent. Because it’s all fictional. There were no Six Million. Not only had Organized Jewry been churning out this number decades before there ever was a National Socialist Germany, in various incarnations, in various places, utilizing the number to extract sympathy for “suffering” Jews from Gentile governments it lobbied ‘round the world to support Jewish aspirations for a “state” in Palestine, but the very number itself is demonic, occult-rooted and Kabbalistic, as it states in the Zohar that SIX MILLION JEWS must perish before ‘Israel’ can be reestablished. To spew that number as if it was veracious is not only an affirmation of history’s biggest lie but an empowerment of the most evil forces our world has ever known.

There were no Six Million. Even the authorities at Auschwitz, where we’re told by the Lecherous Leaders of Legerdemain that 4 million Jews died, have altered the number of dead to 1 million, thus burying the Six Million figure and rendering it historically and numerically inaccurate permanently. And yet, this revision is still a lie! There were no Six Million. The true number for the total of Jewish “victims” is more like a few thousand; tens of thousands at most, all of whom died as a result of starvation or illness. For they weren’t “victims” of National Socialist Germany but the Allied Powers who eviscerated Germany’s supply lines, thus preventing the German state to get meds and food to its own people as well as its prisoners of war, not too dissimilar to what we see being done to the Syrian Arab Republic today.

There were no lampshades, human soap, shrunken heads, ovens for Jews or homicidal gas chambers. The Zyklon B was in fact used for delousing, not mass murder. There was no “Final Solution” either. Even Holocaust “expert” Raul Hilberg, the world’s premier “authority” on the topic, admitted under oath in the kangaroo court of the first Ernst Zündel trial in 1985 that there was no planned genocide against the Jews of Germany, there was no “Nazi” blueprint for mass extermination, no central planning of systematic killing by any agency of National Socialism and no budget designated specifically for the destruction of European Jewry. Ever heard of “The Book That Hitler Fears: Germany Must Perish,” a small volume written by a Jewish businessman and rabid Zionist from New York City named Theodore N. Kaufman? That’s where you’ll find the Jews’ “Final Solution” for Germany, i.e. the mass genocidal sterilization of the German people and the subsequent territorial breakup of Germany as a nation-state through fractionalizing it into smaller, weaker entities. Jewish projection at its finest, ladies and gentlemen.

There were no “death camps” but work camps for those traitors opposing the German state during wartime, who were indeed overwhelmingly Jewish because of Jews overwhelmingly sympathizing with the Jewish-Bolshevik-governed Soviet regime. And within these work camps were swimming pools, soccer fields, orchestras, movie theaters, saunas, synagogues, libraries, maternity wards and brothels. Hell of a lot more cozy than what the Soviets did to their POWs in the gulags and what the Americans did to the Japanese innocents horded into internment camps! And for the love of Almighty God, STOP with the usage of the word “Nazi”. There were no “Nazis” in Germany. Only National Socialists. “Nazi” is literally an American-Zionist propaganda term which was invented to blacklist anyone who opposed US involvement in WW2. It’s no different than “Assad regime” or “Qadhafi regime” or “terrorist” when applied to Hizbullah or “freedom fighter” when applied to the Takfiris currently ravaging our region. If anything, “Nazi” could be written as ‘nazi, as in a shortened, slang-like term for the Ashkenazi Jews at the heart of the world’s ruination, but still, it is so toxic that even this may invoke echoes of lies that led to Germany’s destruction and should thus be avoided. The world’s wealthiest, most influential and most dangerous oppressors are Jews; the Germans who fought against them during WW2 were National Socialists, not “Nazis”. Get it right and knock off the hasbara.

Now to the Congo: At least 10 million Congolese slaughtered in an ongoing proxy war orchestrated by the diamond-mining, copper-thieving, cobalt-extracting Jewish-‘Israeli’-Zionist gangster families of Templesman, Oppenheimer, Mendell, Blattner, Hertzov, Steinmetz and Gertler. And finally, to Iraq. Tortured, demolished, brutalized Iraq, where 4 million Iraqis have been slaughtered in a REAL HOLOCAUST–i.e. death by fire on a mass scale–that has been recurring since 1991. First the Gulf War, then the US-UN-AIPAC sanctions, then the 2003 invasion, now Takfiri destabilization via Daesh. All acts of aggression, all Jewish at the root. 29 Million human beings. Iranian, Bengali, German, Congolese and Iraqi. A mere handful of International Jewry’s victims over the last several hundred years, and nobody knows their stories, names, plights, struggles, agonies or even triumphs in the face of this beast. Why? Because according to Zioganda, The Six Million outweigh all of humanity. ENOUGH.

Enough with Jewish exceptionalism and supremacy. Enough with Pinnacle Jewish Suffering. Enough with self-imposed silence out of fear of the self-aggrandized “chosen”. Enough with the demonizing of Germans and Japanese. Enough with the failure to acknowledge what Berlin and Tokyo did for the world’s oppressed people who were fighting to shake off the shackles of British, Dutch and French colonialism–all financed by Jewish bankers. Enough with the narrative of the victors, who weren’t merely the Allied Powers led by America but the Jews who would steal Palestine from the Ummah. Enough of the hasbara. ENOUGH. And don’t tell us that it isn’t even relevant today when all the wars plotted by the neocons right up until Syria and Libya were done so in the name of the Kabbalistic Six Million; when we can’t talk about the Nakba without the Six Million being thrown in our faces; when we can’t mention any people occupied and colonized anywhere in the world without some Jew somewhere making a false comparison to “Nazi” Germany; when “activism” is so thoroughly Judaized that you can’t even breathe without a Jew checking your thought process for “revisionist tendencies” and then excommunicating you if you exhibit anything “un-kosher”. To hell with this Orwellianism. To hell with the Jewish control of our discourse and to hell with the Holofraud.

For more than seven decades we have lived under the tyranny of The Six Million, holding our tongues, watching our words and walking on eggshells. If the “solidarity” activists and the gatekeepers want to continue on this servile path, let ’em. These trolls, moles, tools and fools can’t stem the tide of the global citizenry awakening en bloc to the ills of Judaic Parasitism.

In honor of the 29 million Iranians, Bengalis, Germans, Congolese, Iraqis and all Gentiles of all walks of life who have perished at the hands of the Yahoudlings, aka The Hooks, aka The Monsters, aka the Synagogue of Satan, aka Earth’s Most Evil, whether these martyrs were Black or Brown, White or Olive, Yellow or Red or Mixed, we are declaring an end to this tyranny. Let us walk with the truth and take a Sledgehammer of Haqq to the lies of the “chosenites”, in a manner more swift, brutal and efficient than the way they’ve used their sledgehammers of falsehood to browbeat us into submission. Let us avenge our martyrs with our fearlessness. The Holy Prophet Muhammad (S.A.W.W.) said that the greatest form of Jihad is to speak truth to an unjust ruler and there is no ruler more unjust than World Zionism. And don’t even bother with the “Holocaust Denier” smear because at this point, that’s just something we chuckle at and embrace wholeheartedly as a badge of honor. For real. I give the final word to myself in the form of the bars I penned for my joint “Dead The Dajjal”. Check the shine on the gem: “9/11 and World War Two are the main tools they utilize to silence discussion/So I am just gonna decry it in public, ‘cause I will not succumb to the wicked/How can I deny your “Holocaust” when there wasn’t one to begin with?/”

33 thoughts on “The Fake 6 Million vs. The Real 29 Million: Jewish Lies, Jewish Crimes And The Collapse Of The Jewish Discourse Paradigm”