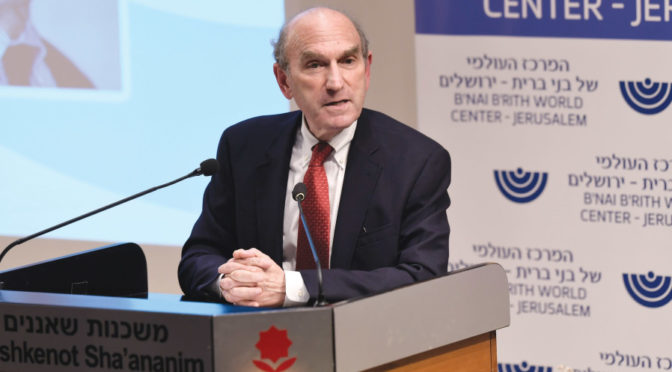 A Zionist’s Zionist and a Jewish supremacist’s Jewish supremacist, Elliot Abrams isn’t just any old neocon. He’s card-carrying neocon royalty. He married Rachel Decter (L.A.), one of the daughters of Midge Decter, the wife of Norman Podhoretz. Rachel was a hateful, racist, ghastly, beastly critter who called Palestinians “savages” and their children “devil’s spawn” and said they should be “food for sharks” and other “oceanic carnivores”. Rather hilarious–albeit despicably so–coming from a daughter of Shaytan whose “chosenite” brethren in occupied Palestine are going to become fish food if they don’t depart from the land they stole by the time the next war rolls around. The Podhoretz-Decter family along with the Kristols and Kagans rule the matrix of think tanks, foundations, magazines, papers and government groups that comprise the fabric of neoconservatism. They are very Jewish. They are very Zionist. And they are very warmongering. Through his induction into the neocon guild, Abrams has been everywhere of note from the American Jewish Committee and its Commentary Magazine, to the Ethics and Public Policy Center (EPPC) and the NED along with USAID, to the AEI and the Hudson Institute, to the CFR and many, many more.

He has deep-rooted ties with the usurping Halakhic-Talmudic regime and is close with Netanyahu himself. He advocated for the release of Jewish-‘Israeli’ spy Jonathan Pollard--the worst spy in American history–on “humanitarian” grounds when really, he was doing so out of Judaic tribalism. Not “reading too deeply into it” either but analyzing the iniquity based on Abrams’ own words and beliefs. In his book “Faith or Fear: How Jews Can Survive in a Christian America”, a problematic and anti-Gentile title if there ever was one, he writes, “Outside the land of ‘Israel’, there can be no doubt that Jews, faithful to the covenant between ‘God’ and ‘Abraham’, are to stand apart from the nation in which they live.” He also says that Jews “are in a permanent covenant with ‘God’ and with the land of ‘Israel’ and its people.” He’s a proud member of the US “Holocaust” Memorial Council too–a house of deception brainwashing American youth with the lies of the Holofraud to make them foot soldiers in future imperialist wars fought for Shlomo’s hegemony. A Zionist’s Zionist and a Jewish supremacist’s Jewish supremacist, isn’t he? We weren’t playing.

It is this Jewish supremacism and commitment to upholding the illegitimate existence of ‘Israel’ at all costs that motivated Abrams in the criminal actions he pursued in both the Reagan and Bush administrations. Whilst in the former, he helped Guatemalan megalomaniac and dictator Efraín Ríos Montt commit genocide and then he covered it up. Montt (L.A.) was a tool of the usurping Yahoudling entity. Abrams, alongside his Shabbos Goy buddy John Negroponte, ‘Israeli’ paramilitaries and CIA-trained Argentinian militiamen, unleashed the horrific Battalion 3-16 in Honduras. He embraced the brutal regime no matter how many atrocities it committed. He whitewashed a massacre of 1,000 civilians in El Salvador and then called the Reagan ZOG’s record in the Central American country a “fabulous achievement”. He was the point man for running guns to the CIA-Mossad proxy Contras in Nicaragua, burying every heinous act they carried out from drug-trafficking to mass killings. He lied to Congress… Twice… About his blood-soaked connection to the Contras… Pleaded guilty on each count but got pardoned by George H.W. Bush. No need to fuss or hand down jail sentences to a Zionist spilling Central American blood, right?

Over the next decade, Abrams would become a regular on the synagogue-speaking circuit and establish his most demonic nexus yet by joining the Project For A New American Century (PNAC), a powerful, ‘Israel’-First and almost-completely-Jewish neocon think tank that literally wrote the paper on the need for 9/11 so Full Spectrum Dominance can be set in stone. He would join the Bush administration and right out of the gate, target Hugo Chavez, a revolutionary legend with strong Anti-Zionist and Anti-Parasitic leanings. Abrams spearheaded the putsch against the founder of the Bolivarian Revolution, working with fellow tribesman Otto Reich to obliterate Venezuelan democracy. Even the UK Guardian (of Zion) pegs him as “the crucial figure around the coup”. He was equally integral to the Zionist conspiracy to concoct the lies that triggered the invasion of Iraq, operating like a hive with Shulsky, Wolfowitz, Feith, Perle and “Tel Aviv” to ensure Mesopotamia’s destruction. He also attempted to break up the Palestinian Resistance and plunge Palestine into an intra-indigenous civil war. Though he has been posing as figure concerned with “human rights” and “democracy’ for the last three decades, he’s been anything but. He’s a Jewish supremacist war criminal and he belongs behind bars or in the electric chair… Not sitting on a perch where he can inflict more pain on more innocents.

That such a murderous thug controls the Venezuela file should scare all of humanity. What makes this development especially baffling is that the Jewish Power Configuration tried to force Abrams down Trump’s throat at the start of his presidency, but Trump showed at least something resembling testicular fortitude and balked. By acquiescing now, the Orange Oaf is proving that whatever opposition he presented to Zionist designs on the Grand Chessboard weren’t very stiff. There’s no 4-D, ultra-panoramic bait-and-switching here. He’s being used and abused by the ZOG like each and every one of his predecessors. And it is Venezuela that is paying the price. Abrams is a sadistic and bloodthirsty monster. And with Pompeo and Bolton as his wingmen, not to mention Sigal Pearl Mandelker–the ‘Israeli’ sanctions czar who is fresh off tormenting Marzieh Hashemi, and who has been ramping up the financial war on the Venezuelan people since she took over from Szubin, instituting crippling restrictions packages in December ’17 and March ’18–being his economic hammer, Caracas is undoubtedly in bigger danger than when Abrams was last in the halls of the ZOG.

It cannot be forgotten however that contrary to Abrams’ efforts in Central America during the sanguinary Reagan years, as a Bush regime official, he failed… And emphatically so… to destroy El Comandante Hugo Chavez. Chavismo is still very much alive in Venezuela. The Bolivarian Revolution shouldn’t be underestimated. Abrams can do his worst… And he assuredly will. But he doesn’t stand a chance against the ready and resistant sons and daughters of Bolivar and the Barinas Bull.

4 thoughts on “The Demon’s Head Appears: Jewish Supremacist War Criminal Elliot Abrams Is The Leader Of The Coup In Venezuela”