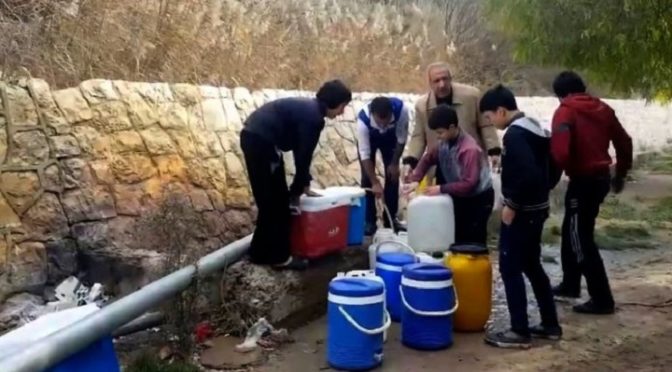 The Syrians of Damascus are in the throes of an all-out humanitarian catastrophe. And the blame lies solely at the gnarled, spiked feet of NATO (led by the US and Turkey) the GCC (led by Saudi Arabia and Qatar) and the usurping ‘Israeli’ entity. Just prior to Aleppo’s complete liberation, Earth’s Most Evil activated Daesh in Eastern Homs and carried out a full-fledged assault on the ancient city of Palmyra. The terrorists retook the Pearl of the Desert and fierce fighting in and around the area continues up until this moment. But the monstrous, murderous individuals who run Empire Zionica weren’t content with this crime against humanity so they decided to outdo themselves and implement something far worse and far more destructive. Takfiri terrorist groups, with Jabhat al-Nusra spearheading the initiative, dumped diesel and other contaminants into Wadi Barada’s Ain al-Fija reservoir on December 23rd and the 5 million residents of Damascus have been without water ever since. Syrian President Dr. Bashar al-Assad and his team, while providing water rations to as many people as they can, are pursuing a two-pronged strategy via diplomacy and military operations to try and dislodge the mercenaries from Wadi Barada and restore the flow of potable H2O. Reports have surfaced about a possible “peace” agreement and many terrorists have surrendered, but since it is the Washington ZOG pulling the strings and not the head-chopping death squads merely doing their masters’ bidding, the disaster is far from over.

One would think that the water supply of one of the oldest cities in the world being poisoned by Al-Qaeda gangs armed by Western states and “Arab” petrodollar monarchies would be front page news across the globe. But since Syria is the topic of discussion, deflection and deception remain the cruxes of the Zionist media’s abysmal excuses for reportage. There has been scarce coverage to say the least and whenever an article has popped up, instead of accurately calling pots, kettles and pans black as coal, the mainstream press has obfuscated the issue and framed its pieces in such a way that one would think it was the Syrian government that is responsible for this nightmare. In certain fallacious instances, like a vomit-inducing new Daily Beast piece entitled “Assad’s Newest War Tactic: Dehydration”, Damascus is erroneously and atrociously blamed outright. In what realm of any dimensional plane does it make even a scintilla of sense that the leaders of the Syrian government, including Dr. Assad, would poison an aquifer from which EVERYONE in Damascus, themselves and their families included, uses to drink? Obvious Zionist “regime change” agenda aside here, how does this even make it to print as remotely credible journalism?

From this perspective alone, such suggestions, i.e. that “the Assad regime” is “dehydrating its own people”, are drenched in jocularity. It’s like something off of a Twitter geopolitical parody account. And as if this gigantic MSM depravity–the latest in more than half a decade worth of similar corruptions and distortions–wasn’t scurrilous enough, the White Helmets, those darlings of Zio-Imperialists everywhere from Hollywood liberals to globe-holding, real-life Mr. Sinisters like George Soros, revealed that they are part of the crime in Wadi Barada. They signed a document admitting their role and their approval of the actions taken by their terrorist cohorts, not to mention issuing demands that international observers enter the Syrian arena and that the Syrian Arab Army and Hizbullah stop attacking Al-Qaeda. The gall on these pretenders who claim to save Syrian lives while depriving thirsty Syrians of sustenance! Not even a one-paragraph op-ed buried deep in the NYT could be mustered to simply ask why this group, funded directly by America and Britain, maintains such a cozy relationship with Al-Qaeda and why it has no qualms about participating in a war crime of the highest order.

As if the situation wasn’t already at the apogee of horrendous, the Wahhabi freaks of Daesh in eastern Homs, who are feeling the pressure as the Syrian Arab Army continues to beat them back and advance towards the goal of recapturing Palmyra, blew up the Hayyan Gas Company, Syria’s most important source of gas, causing a heat crisis on top of the water crisis. This too undoubtedly came at the behest of the US ZOG. Now Damascus has no water, no heat, right in the midst of a winter that is bitter and brutal, and all to kick off Christmas and the New Year. Millions of Syrians across Homs and Hama are without heat currently too. This is how NATO, the Jewish supremacist tumor and the Saudi-led oil-and-gas despots bring “democracy” to Syria. And “freedom”.

The poisoning of the Wadi Barada aquifer expose many a truth. 1) The Empire’s fourth generation warfare campaign against the Syrian Arab Republic just can’t cut the mustard. Billions of dollars in military hardware have been delivered to the fanatical rebels, with Russian sappers recently discovering massive caches of NATO (US, British, German and Bulgarian) arms in Aleppo and the Syrian Arab Army unearthing a giant stash of French-made weapons heading to Al-Qaeda in Hama, and none of it has made the least bit of difference. Syria’s armed forces and their allies keep progressing on all fronts nationwide and if the international spigot of money and arms was turned off, the war would be over in weeks. 2) The ‘Israelification’ of the American military doctrine is complete. When faced with the failure of realizing even a single strategic objective, US forces, either directly or by proxy resort to burning an entire ‘target’ (read: nation, people, infrastructure) to the ground. The Dahiyeh Doctrine founded by ‘Israeli’ war criminal Gadi Eizenkot is not only being employed by the Saudi-Wahhabi regime in Yemen but by the American ZOG’s vassals in Syria too. 3) While the Takfiris, when left to their own Muhammad Ibn Abdul Wahhab- and Ibn Taymiyyah-inspired devices, slaughter each other like rabid, ravenous animals as this is the barbaric nature of their satanic “beliefs”, the second that a critical moment arises, they all work together in unison to please their controllers.

Usually, Nusra and Daesh are bitter enemies, but here, every previous dispute gets chucked out like the baby WITH the bath water because all that matters is overthrowing the Syrian government on a maximum level or keeping Syria destabilized on a minimal level. This also confirms how malleable these groups are in the hands of the big powers running them. 4) For the umpteenth time, there is no such damn thing as a damn “moderate rebel”. Opposition sources love to claim that the FSA isn’t “extremist” on its own and is actually fighting “extremism” but yet again, in the case of Wadi Barada, the FSA and its affiliates closed ranks and folded into the arms of Jabhat al-Nusra to ward off the Syrian Arab Army and Hizbullah. 5) Also for the umpteenth time, the Zionist media is Al-Qaeda’s cheerleader and fundamentally dishonest. It cannot even report a most basic truth that “rebels” poisoned the Damascus water supply. The attempts to spin it like the Syrian government is the culprit behind this horror scene are as feeble as they are comedic. 6) The White Helmets are neither “humanitarian”, nor “activists”, nor “civilians”, nor “heroes”, nor “civil defense”, but active partners of terrorist groups and beyond being the mere clean-up crew of Al-Qaeda, they are enthusiastic participants in crimes against humanity.

And as mentioned above, these goons are funded by the US State Department, the UK Foreign Office and egomaniacal Jewish-Zionist billionaire George Soros. Keep this in mind when George Clooney begins production on his White Helmets movie–or more accurately, propaganda festival. 7) The Takfiri terrorists really are the sons of Zion. It’s well-known that cruel, hateful, usurping ‘Israeli’ settlers, whether on the ground in the West Bank and Jerusalem, or from the air in Gaza, poison Palestinian wells and other water sources. In the Lugansk region of Donbass/Novorossiya, the Jewish-run Kiev regime cut the water and electricity off to the Russian-speaking population. Considering the plot against the Syrian Arab Republic is Jewish-Zionist-‘Israeli’ at the root and core, Nusra and ISIS, in their cut-off of water and gas to Syrians, are just following the examples historically set by their “chosenite” overlords.

Bringing everything full-circle, with the SAA and Hizbullah fighting their hearts out to drive the Wahhabi-Takfiri trash out of Wadi Barada and free the aquifer, the hope of course is that this will be achieved and then the entire debacle can be placed in the ever-growing file of bold but failed attempts by the enemies of Syria to change the tide of the war. But God forbid that this battle drags on and Syrians begin dropping dead from thirst, the blame will not be on the valiant soldiers and moujahideen of Bilad al-Sham who are trying to end this crisis, nor will the blame be on the Syrian president. Verily, those who would be responsible are the same ones who ordered the poisoning of Ain al-Fija and who unleashed this terrorism on Syria to begin with; the same ones who want Syria eviscerated to ash because Syrians refuse to sign their country over; the same ones who weaponized Al-Qaeda before mutating it into Jabhat al-Nusra and ISIS and then calling it a “revolution”: NATO, the GCC and ‘Israel’.