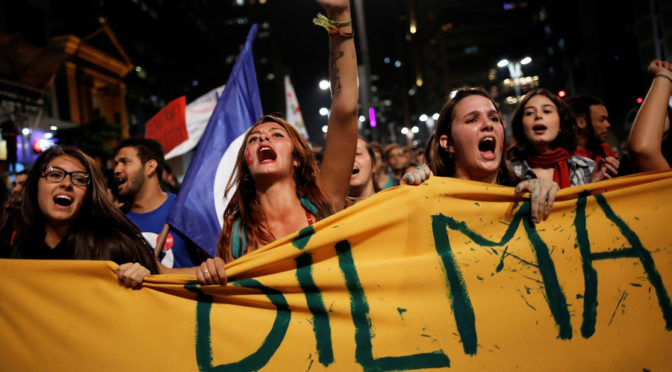 Massive, fiery protests for democratically elected, criminally ousted Brazilian President Dilma Rousseff?! What?! You ain’t gon’ see this in the Zionist media! And why would you? The Zionist media, and the entire Jewish-Zionist-‘Israeli’ globe-holding cabal, have been the key driving force in implementing the coup against Dilma, but yet, as usual, NOBODY is delving into these connections and bringing them to light.

The first Brazilian woman to head the state was overthrown in a totally illegal “regime change” operation and not even DAYS after, an ‘Israeli’ financial terrorist and squatter from occupied Haifa, Ilan Goldfein, took over Brazil’s central bank. The parasitic Zionist usurper welcomed the coup and said that it will have a “stabilizing effect” on the economy, despite the fact that spending cuts, an increased retirement age and other punishing neoliberal hellishness are about to wreak havoc on the poor. In fact, Brazil’s economic situation is in shambles to start with largely because of the scheme Judaic gazillionaire monster George Soros launched when he deliberately tanked Petrobas with his stake-reduction last year. Not content with the mere smashing of the Brazilian economy however, Soros, in all his “color revolution” deviousness, had his Open Society Institute pump all kinds of dough into Vem Pra Rua (To The Street) and the Free Brazil Movement, the two biggest groups that led the protests against Dilma. And let us not forget the Zionist-dominated putschist organizations known as the NED and USAID, which worked alongside these Sorosites as they always do.

But it gets deeper and even more disturbing. An ‘Israeli’ start-up company–a euphemism for a Mossad-Shabak-Aman intelligence-gathering operation–called StoreSmarts, utilizing technology known as SmartLok, has been at the forefront of generating the count of anti-Dilma, anti-PT, anti-Bolivarian demonstrators on the streets and has been promoted heavily by the Zionist-Brazilian media for its “innovative” methods. In other words, these ‘Israeli’ spies manipulated data for their cancerous entity’s geopolitical interests and repackaged a few thousand oppositionist demonstrators into a “MILLIONS-STRONG, revolutionary, anti-corruption people’s uprising” and the devilish mainstream press ate it up like a side of beef with a baked potato. Beyond this damning revelation, there has been extensive involvement in the anti-PT protests from the Brazilian Jewish community at large, who are all part of the upper-middle-class and upper-class of the country and thus tied to its financial, social and political “elites”, going back three years ago. Jewish-Zionist groups like Hillel, Habonim Dror and Chazit Hanoar, whose members invoke their Judaism as a motivating factor in their attack on PT and quote the Talmud to prove it, have been out to depose Dilma from day one and are indeed leaders in this ‘soft power’ US-‘Israeli’ aggression.

And then of course there is the media itself, led by Brazil’s premier mainstream television platform, Globo, which Dilma’s supporters have exclusively lashed out against for being primarily responsible for the putsch. Globo hasn’t just exaggerated the numbers of the anti-PT demonstrators based on ‘Israeli’ StoreSmarts’ false data, but propagandized that there were ZERO pro-PT protests countering the “regime change” plot at all, therefore manipulating Brazilians first and foremost as well as other media outlets worldwide. Who owns Globo you ask? The Marinho family, a gang of crypto-Jewish billionaires with a longstanding Zionist-Imperialist agenda going back to the coup against João Goulart in 1964. Whichever direction the Marinho clan sends the coverage on a certain event, Brazil’s other press outlets, also owned by Jews as well as crypto-Jewish moneymen with likely ties to the Zionist entity, ultimately follow.

One could speculate if Dilma’s government didn’t reject an ‘Israeli’ settler leader as the artificial ‘Tel Aviv’ regime’s ambassador, or if it had made itself more bendable before the Anglo-Zionist project for Latin America, maybe this coup wouldn’t have occurred. But such thoughts would be exercises in futility. What happened, happened, and now it’s time to call it what it is, A ZIONIST COUP, like Ukraine before it, and do whatever is necessary to counter the hasbara in the alternative media sphere to present it as anything but. Globo, Soros, Hillel, Habonim Dror, Chazit Hanoar, StoreSmarts, the NED, USAID, Ilan Goldfein, these are the hateful Talmudic heads and hands behind the downfall of Dilma Rousseff, the evisceration of Brazilian democracy and the impending destruction of Brazil as a functioning state.

The Brazilian people should dig deep into their past for answers, to the 1600s, 1700s, and 1800s, when Dutch and Portuguese Yahoud, ‘kings’ of the Jewish-dominated Transatlantic Slave Trade, came as colonizers to their land and brought with them African-Muslim slaves whom they tortured and dehumanized on their sugar plantations. The colonization and the slavery is happening all over again, only in this instance it’s in the form of Zionist neoliberalism. Will Brazilians go quietly into the night? Or will they rise up like the heroes of the Malê Revolt and take back their dignity? We certainly pray for the latter. And we also pray for the swift overturning of this Zionist coup before things in Brazil become too far gone, and too far Judaized to counteract.

3 thoughts on “The Coup Against Dilma Rousseff Is A Zionist Coup; What Else Is New?”