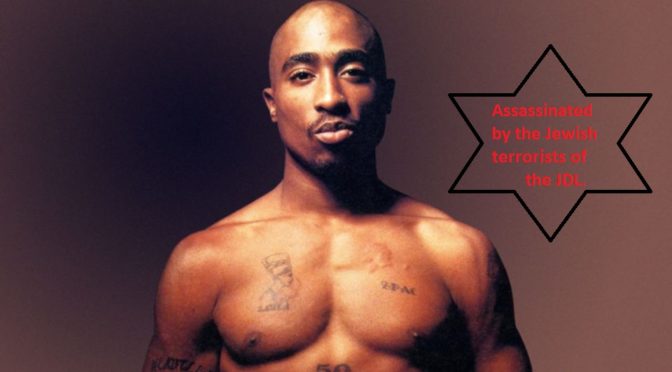 It has been 20 years since Tupac Amaru Shakur was assassinated… not murdered, but ASSASSINATED. Everybody under the sun has been blamed for the crime–the FBI, Suge Knight, Puffy, White Supremacists, “organized crime”, the pigs (allegedly in revenge for the actions of Pac’s godmother, Assata Shakur), a few OGs even said to me that the order came from the White House itself. Everybody under the sun indeed. Everybody under the sun that is, EXCEPT the ACTUAL culprit: the Jewish Defense League (JDL), which the feds once called the most dangerous terrorist organization in the United States, but never actively pursued it as they should have because of heavy pressure from the Zionist Lobby based on hideous, baseless accusations of “Anti-Semitism”.

The JDL, according to documents released by the FBI over five years ago–documents which had been inexplicably kept under wraps by the feds since that tragic 13th day of September in 1996–was running a massive extortion racket against Hip-Hop artists on the West Coast, the two most prominent targets being Tupac Shakur and Eazy-E. The scam wasn’t complex: A JDL operative would bombard an MC with phone calls, threaten the MC and his family with death, and continue to do so until the MC paid up. At that point, the MC and his kin would be taken to a safe house where money–somewhere in the neighborhood of $50,000.00 at a time–was exchanged for several heavily armed JDL “bodyguards” which would serve as the MC’s protection. In reality however, these “bodyguards” were nothing but terrorist gangsters, many of them “ex”-IOF or “former” katsas of Mossad, and the “protection” being provided wasn’t for the MCs themselves exactly but for what the JDL viewed as newly recruited money-making assets. What makes this all the more disgusting is that the JDL, a violent gang of Jewish supremacists, openly and unashamedly hated Black folk and based on its founder Meir Kahane’s teachings, which are derived from both the Talmud and the mad ravings of famed rabbinical “sage” Maimonides, also openly and unashamedly referred to them as “schvartzes” and “kushim”, the Yiddish and Hebrew words for “niggers”. Abominable Jewish racism. Just downright abominable.

Going deeper, the released FBI documents also reveal that just prior to Tupac’s murder, he had received death threat calls from the JDL. Moreover, the docs also shed light on the fact that organized crime figures–whose names are redacted–long suspected of extorting Eazy-E and Ruthless Records as a whole, figures who were also persons of interest in the killing of Pac, were acting in concert with the JDL. The FBI additionally called for an investigation into whether this enormous extortion racket was being operated solely for criminal gain or to further the JDL’s political agenda. Whether such efforts were ever pursued remains unknown but logic would dictate a negative outcome considering the heavy-handedness of the Jewish Lobby, specifically the ADL–which would bash the JDL in public but provide it with financing and logistics in private, see the writings of assassinated Jewish journalist Robert Friedman for the stomach-churning details–and the Zionist Organization of America, not to go after the JDL as well as the Russian-Jewish Red Mafiya for that matter. And no doubt that the organized crime figures whose names were redacted by the feds are Jews from this Red Mafiya, the most powerful criminal enterprise on Earth. No doubt at all. Which brings us to the “why?” of this murder mystery now that we have the “who?”

Every crime committed by members of the JDL, from its attacks on Soviet Union embassies to its murder of Alexander Odeh, its “saint” Baruch Goldstein’s Ibrahimi Mosque Massacre to its savage harassment of South Dakota Congressman James Abourezk, Minister Farrakhan, Edward Said and too many more to acknowledge here, was to further its “political agenda”, i.e. establishing “Greater Israel” and killing as many Muslims and Arabs as it could along the way. So what would be the purpose of eliminating Tupac? Well. It has long been rumored in both the mainstream circles of Hip-Hop and its political underground that Pac reverted to Islam and was imminently planning to go public about his faith. It’s eerily reminiscent to Michael Jackson, another musical genius absolutely despised by the Jewish Power Configuration, for the “King of Pop”, as shockingly–or maybe not so shockingly when we remember Michael’s love of humanity–revealed by his brother Jermaine in a 2010 Al-Arabiya interview, had also reverted to Islam prior to his mysterious, heartbreaking death.

Tupac wasn’t the most gifted MC ever lyrically speaking, not even close. But the reason why he is considered the best MC of all-time by so many is because of his ability to connect with his listeners emotionally. His cadence, flow, realness, ferocity and versatility to fluctuate between the street and the global, the hardcore and the political, were (and remain) unique to his person. No MC, apart from Joe Budden perhaps, who himself is a student of Pac, has ever replicated this distinct talent. It is this specialness that also made Pac a threat to the powers that be, the real globe holders–International Zionism–because it allows him to project a revolutionary message to countless Black, Brown and White souls, something he did in fact with “2Pacalypse Now” and “Makaveli”, which, also according to Hip-Hop ‘legend’, weren’t even the beginning of what he had in store.

The prospect of the most beloved MC of all-time declaring to his millions of fans worldwide that he was Muslim would have triggered mass reversions, with only ALLAH (SWT) knowing how many would have actually taken their Shahada and joined the Ummah. Pac was also said to have wanted to abandon his “gangsta” style and focus strictly on music that would uplift project youth, not drive them further into chaos and brokenness. This, coupled with Islam, would have seen Shakur taking on an even more militant persona than he already had and ushering in a revolutionary era still yet to come.

With 9/11 and the global demonization of Islam on the horizon on a macro level–events planned decades prior even at that point in time–and the erosion of Hip-Hop at hand on a micro level, Empire Judaica could not have such a hiccup interfere… So it ordered the JDL to carry out the hit and nobody would be the wiser as the Zionist media told the nation (and the world) that it was all just some silly, violent, “ghetto”, East-West, “Bloods-Crips” beef. The FBI’s top brass, out of fear of losing their jobs because of Organized Jewry’s pressure, kept the JDL’s links to Pac’s death–both the lead-up and the actual night of the murder–under wraps until nobody seemed to care anymore. In other words, they covered it up and let the killers get away. Literally. As the case has been with nearly every other JDL terrorist attack, the perpetrators would escape American (and Canadian and French) justice by fleeing to the usurping Zionist entity, which is where Pac’s murderers probably are residing right now as they squat on land that doesn’t belong to them and burn a few Palestinian olive trees down while they’re at it.

The FBI spied on Pac COINTELPRO-style. The Anglo section of America’s “elite” was happy to see him go, particularly the Blue Bacon haven known as the LAPD. Suge Knight benefited in an immense financial capacity from Pac’s death. As did many of Pac’s musical rivals. All of this is true and part of the plot against Pac and Hip-Hop generally speaking. But nobody reaped the “reward” of Tupac Shakur’s martyrdom quite like International Zionism, most especially the Jewish heads of the record industry who have made hundreds of millions off his blood, because a powerful voice for truth, positivity, resistance and revolution was snuffed out long, LONG before his full, glorious potential was reached.

The JDL’s links to the extortion of Tupac, threats on Tupac’s life and the night of his death are all undeniable. So why is it that no MC has ever had the guts to call it out on record… Except me (See “The Liberators” off Son Of Kufa Vol. 1)? And why is it that no Hip-Hop news/analysis/blog/commentary site has ever broached the subject either… Except Mouqawamah Music? I’ll tell you why: Because a criminal network of Yahoudlings dominates the world and everybody in the “rap” world is scared to say so, even though everybody in the “rap” world damn well knows it to be the case. Thus, in the final analysis, who killed Tupac Shakur?! Jewish terrorists did. Add it to the laundry list of their crimes against Hip-Hop and the even bigger laundry list of their crimes against humanity over the last four millennia. #RestInPowerTupac #MakaveliForever

7 thoughts on “The Assassination Of Tupac Shakur: Who Did The Crime? Jewish Terrorists, That’s Who!”