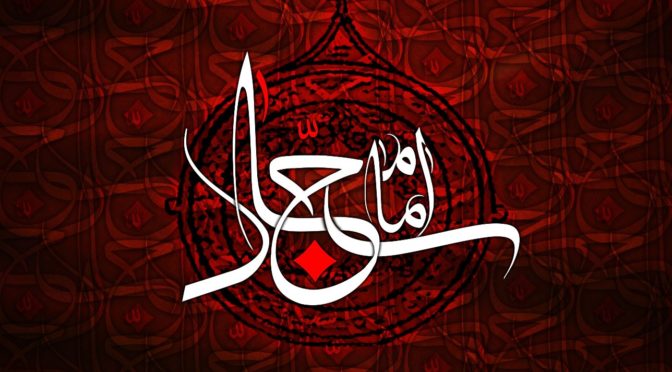 So instead, we’d rather focus on Imam Zayn al-Abideen’s (A.S.) Mouqawamah, his words which were as akin to precious gemstones as those of Muhammad al-Moustafa (S.A.W.W.) and Imam Ali (A.S.) themselves, and his prayers, which were of such astonishing exquisiteness and brightness that the songs of Angels (A.S.) could be composed from them and stars could be eclipsed by them. Indeed, what Al-Sajjad (A.S.) taught us is that words… Matter. Words… Can topple tyranny. Words… Can remake the machinery of history in mid-production for the Moustakbireen and send it in a completely different direction on behalf of the Moustazafeen.

Moreover, Imam Sajjad (A.S.) was the living embodiment–and we say living because the Shouhada are alive, none more so than those of Ahlul Bayt (A.S.)–of the 30th Ayah in Al-Anfal, the 8th Surah of the Holy and Sublime Qur’an, “And [remember, o’ Muhammad], when those who disbelieved plotted against you to restrain you or kill you or evict you [from Makkah]. But they plan, and ALLAH plans. And ALLAH is the best planner of all.” Because Yazid (L.A.) thought that his annihilation of Ahlul Bayt (A.S.) was complete on the 10th of Muharram in 61 A.H. Imam Hussein (A.S.) was murdered along with the overwhelming majority of his family all the way down to the babies. The bodies of the Shouhada were mutilated, dismembered and scattered. And all that remained was the sickly Zayn al-Abideen (A.S.), who Ibn Mouawiyah (L.A.) thought would just die off, and Lady Zaynab (A.S.), who the tyrant didn’t think would be a nuisance. But the Heroine of Karbala nursed her nephew back to health and while Yazid (L.A.) would die hellbound, Al-Sajjad (A.S.) would prosper, flourish and achieve unprecedented popularity. The peoples of the Islamicate, from the Hijaz to Bilad al-Sham, adored him for his kindness, humbleness, knowledge and warm Nour that exuded from his pores. Yazid (L.A.) and the Jews planned. And ALLAH (SWT) planned. And ALLAH (SWT) is the best planner of all!

Zayn al-Abideen’s (A.S.) rise is what drove Al Walid I (L.A.) and Governor al-Murri (L.A.) mad. The entire Umayyad regime could collapse under its own corruption if the Imam (A.S.) was allowed to continue with his preaching of the Muhammadi message, they thought. So they imprisoned him. Beat him. Shackled him. Tortured him. But his spirit was as indestructible as the Deen itself and the tears that he cried in captivity were not for the physical pain inflicted on him; they were for his father and the Karbala 72 that he let flow whilst in unmatched supplication to ALLAH (SWT). Indeed, the Imam (A.S.) cried every single day for 20 years in the name of Ashoura, and each river of agony was like a renewal of the righteousness of the Karbala martyrs’ sacrifices. Imam Hussein (A.S.) came to life on this plane in every tear that dripped from Al-Sajjad’s (A.S.) sacred eyes. And the Ummah drew nearer to him, internalizing the 10th of Muharram as inspiration and motivation to be better human beings. Yet again, the plans of Bani Umayya were upended by Al-Mousawwir (SWT). For in their quest to silence him, the despots only succeeded in making him louder–their jail cell like a bull-horn amplifying his message of defiance.

And in their attempts to weaken him, the mercenaries of Satan only made him mightier–their abuses like stairs that he climbed to reach stations higher and higher than those already etched out for him in comet-rock in Jannah. And while their poison made the Imam (A.S.) so violently ill that he couldn’t stand and prevented him from physically fighting, he never let a moment flee without fierce condemnations of their debauchery and affronts to Islam departing his sacred tongue. In the prophetic-like wisdom coursing through his veins from his great grandfather, Ahmad al-Habib (S.A.W.W.), he left a book behind, Al-Sahifat al-Sajjadiyyah, with all the du’a that served as lightning strikes on the foundations of the illegitimate Umayyad “caliphate”. Like the Imam (A.S.) said, “We are the doors of Allah. Walk through us and find the straight path.” And what you end up treading upon is a passageway of Resistance against the most vicious forms of oppression. Imam Muhammad al-Baqir (A.S.) said, “When I buried my father, I saw the marks and bruises imprinted on his skin from the chains and lashes!” Now Al-Sajjad (A.S.) has his Mukhtari-like vengeance because it is his word-blades that serve as chains and lashes upon the heads of occupiers and their tools when his awakened partisans recite his supplications today.

“His Supplication For Himself and The People Under His Guardianship”, number five in his book of rubies, is a rebuke of the subverters of Ahlul Bayt (A.S.) and a reminder to all who call themselves Husseini that the schemes of the devils can never prevail over the Divine Architecture of ALLAH (SWT). “His Supplication In Asking For Water During A Drought”, number nine in his book of diamonds, isn’t only to be taken literally, but metaphorically too. It is a missive of hope in the darkest hour that ALLAH (SWT) always has our backs and the oppressed will one day be free and the battered will be healed, “O’ God, give us water through rain, helping, productive, fertilizing, widespread, plentiful, abundant, bringing back the risen, restoring the broken!”

Number forty-two in his book of sapphires, “His Supplication Upon Completing A Reading Of The Holy Qur’an”, is an empowering, gorgeous-beyond-gorgeous reinforcement of Hadith al-Thaqalayn, for we surely cannot have one without the other. Subhan’ALLAH. And “His Supplication For The People Of The Frontiers”, number twenty-seven in his book of emeralds, is so bone-chilling it’s of a hypothermia-inducing quality and the du’a we make for all those on the Mouqawamist frontiers as of this moment: The Palestinian Resistance, the fighters and stone-pelters of occupied Kashmir, Hizbullah of Lebanon, the Iraqi Islamic Mouqawamah, Yemen’s Ansarullah, Pakistan’s Zaynabyoun, Afghanistan’s Fatemiyoun, the Syrian Arab Army and the Islamic Republic of Iran.

For too long, we have allowed the likes of the MI6-Mossad-linked Shirazis and meek, weak, cowardly, Westoxified “moderates” depict Imam Sajjad (A.S.) as a religious aesthetic who merely spent his time weeping in seclusion. What they fail to comprehend is that his tears, cried in supreme devotion to ALLAH (SWT), were an integral part of his Salat and his Salat was the backbone of his Resistance. Thank God for Ayatollah Sayyed Ali Khameneni, who corrects the fallacious notions of the ignorant ones and the hypocrites, “Zayn al-Abideen (A.S.) was not a passive figure who lived his life silenced and afraid. He was a tireless and assertive hero who challenged tyranny and exposed the enemy.” Expounding on the Imam of the Islamic Revolution’s critical revision, Imam Ali ibn Hussein (A.S.) was the true heir of the Divine-sent revolutionary, resistant tradition.

Muhammad ar-Raouf (S.A.W.W.) resisted, overthrowing the agents of debasement and dishonesty through spiritual, military, economic and political means. Imam Ali (A.S.) resisted, taking eloquence to new heights on the one hand and on the other, signing his name in the journals of history as the most prolific warrior Arabia and perhaps the whole of the world have ever known. Imam Hassan (A.S.) resisted, displaying patience never duplicated EVER again and thwarting the plots of would-be-fitnah-makers by seeking peace as opposed to war. Imam Hussein (A.S.) resisted, with his Godwariness, his courage, his Yaqeen (certainty), his steadfastness and ultimately, his blood. And Imam Zayn al-Abideen (A.S.) resisted, using the words of his heaven-shaking, ground-quaking prayers as instruments of rejectionism in the face of hostile, savage, usurping monarchs.

The words of the Imam (A.S.) were (and are) as powerful as Hizbullah’s rocketry and Ansarullah’s drones. Allahu Akbar. We can even consider Al-Sajjad (A.S.) the father of linguistic, poetic and cultural resistance in this era as well as all eras previously. If you write rhymes, construct poems, script music, belt out nasheeds or make art with Ahlul Bayt (A.S.) guiding you, then you are a son of Ali ibn Hussein (A.S.) Like his pure bloodline before him, Imam Zayn al-Abideen (A.S.) was a Pioneer of Resistance. The Wordsmith Of All Wordsmiths. The Prayersmith of all Prayersmiths. The Author of Authors. Let us truly honor him by remembering him as such. And toss up a supplication while you’re at it. For no commemoration of the martyrdom of Imam al-Du’a (A.S.) would be complete without du’a from the undying Mouqawamistic souls who know him, love him, cherish him and live by his pristine example. Labaykah ya Zayn al-Abideen (A.S.)!