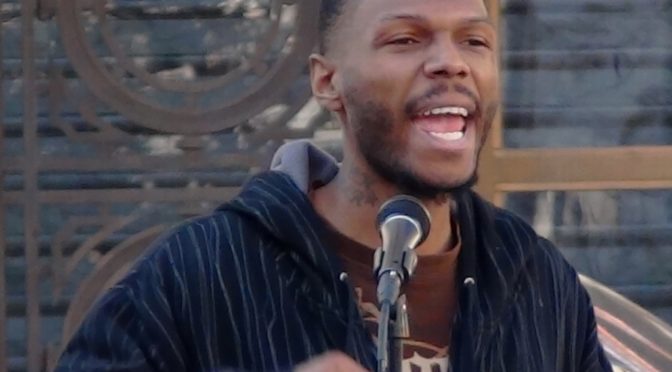 But I do not write to you today from the apex of triumph and defiance that informs much of our identity as Shi’a. Instead, I write to you from the other side of the spectrum which is also very much a part of our being as the soldiers of Ahlul Bayt (A.S.): Agony, tragedy and heartbreak–all felt with unimaginable intensity by Imam Hussein (A.S.) and the Karbala 72 on Ashoura. For today is the 4th anniversary of the martyrdom of Malcolm Latif Shabazz (R.A.), the grandson of our eternal revolutionary teacher Hajj Malik el-Shabazz aka Malcolm X (R.A.) Young Malcolm was murdered under exceptionally murky circumstances in Mexico City, where he had traveled to express solidarity with a deported labor organizer as well as to build a broad coalition of strugglers against Zio-Imperialism, from the oppressed Mexican people to oppressed Muslims in the US. No such bridges were constructed however because the sole male heir of Malcolm X was beaten to death outside a bar, of all places. The official story shall not be repeated here because it shall not be dignified with a retort. In the same vein, the Zionist media’s coverage of Young Malcolm’s martyrdom was so insanely execrable, deliberately deceptive and overtly racist, with particular malice towards his blessed family, that it too shall not even be dignified herein.

We know that Malcolm Shabazz was assassinated by the same shadowy forces–Mossad, CIA, their tools or all of the above–who slaughtered his grandfather because we know exactly who Malcolm Shabazz was. Charismatic, with a smile so bright that you’d swear it was a star adorning the the skies over San Pedro de Atacama. Fiery, so fiery in fact that he could give his gramps a run for his money and lest we forget that it is not only Malcolm X’s blood that ran through his veins but also that of the Algerian Revolution. Principled, who stood with the Moustazafeen (oppressed ones) no matter what, especially the Palestinian people and their sacred cause, not to mention Iran and Venezuela. Revolutionary, with absolutely ZERO fear about speaking on the most important issue of our time – overthrowing World Zionism – even with the FBI and the ADL breathing down his neck out of sheer apprehension that he could take his grandfather’s place. And Husseini, in spite of the harshness of his life, from his broken family to his stints of being dehumanized in the prison industrial complex, Young Malcolm found his way to the path of Imam Hussein (A.S.) and gracefully, suavely and passionately glided upon it until the day of his martyrdom. He was a lantern that burned out far too soon; a lantern that could’ve illuminated the Global South just like his gramps did. Gut-wrenching.

What makes his ascension to the realm of our ancestors and great martyr-heroes a personal matter is that Mohammad Hamza, Intifada Street founder and the brilliant graphic artist behind this piece, spoke to Malcolm Shabazz just two weeks before that fateful day in Mexico. They discussed an imminent trip to the UK where they planned to finally meet up and push forward with our righteous struggle in both word and art. Malcolm was Mohammad’s friend and brother, and I tip my hat in melancholy for my dun’s devastating loss. I wrote an entire verse about Malcolm Shabazz for “Eternally Husseini” but unfortunately, the track, “Mother Africa, Father Karbala”, did not make the cut for technical reasons. I plan to re-record it and put it out as a standalone soon and of course, Hamza will be providing the breathtakingly beautiful art as always. In the mean time, we dream of what could’ve been and rage at the oppressors for blotting out the light of another gem-like giant.

Their failure though, as always, is that as the Shi’a of Hussein (A.S.), we know not what it means to kneel. 7ayhat minna zilla (Us? Humiliated?! Never, ever!) indeed! We rock our martyrs on our sleeves with pride. Malcolm Latif Shabazz rose above the system which intended for him to be in the dregs ’till he died in obscurity. Now he sits with the Prophets, Imams, Saints and Angels for infinity… With his sacrifice of sacrifices birthing more like him daily. That is, 100% and then some, EVERYTHING that “Eternally Husseini” means. Rest in power habibi Malcolm! I ain’t get to meet you but I wish so much that I did… And I pray that the upcoming album will honor you, your grandfather and the Anti-Imperialist, Anti-Parasitic legacy that you both gave your lives to uphold. #EternallyHusseiniComingSoon #HusseiniDayMay25th #MaddCold #HipHopHizbullah #WeAreAllMalcolmShabazz #WeAreAllMalcolmX #MotherAfricaFatherKarbala