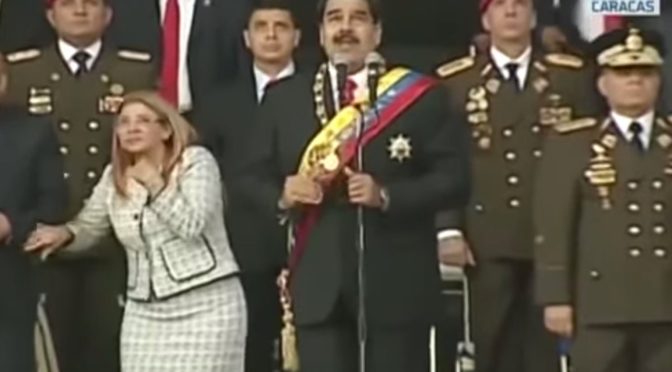 The usurping Zionist entity and the American ZOG just attempted to assassinate Chavista revolutionary and Venezuelan President Nicolas Maduro, along with his wife, Cilia Flores, and several high-ranking officers of SEBIN (Venezuelan intelligence) and the Bolivarian Armed Forces. Multiple C-4-armed “suicide” drones were floating over the heads of the Venezuelan head of state, the First Lady and numerous military officials as he delivered a speech celebrating 81 years since the Venezuelan National Guard was formed. It was Cilia, a lawyer, devoted resistor herself and a former head of Venezuela’s National Assembly, who noticed the anomaly above. Then Maduro picked up on it. Bolivarian snipers, noticing the increasing anxiety, caught the devices in their crosshairs and shot the drones down before they could get any closer. The drones exploded, revealing their “suicide” nature. Massive panic ensued. The ceremony was finished at this stage and scores of spectators and national guardsmen poured away from the crime scene in the chaos.

The National Movement of Flannel Soldiers has publicly claimed responsibility for the criminal and yellow-bellied move on Twitter. Venezuelan terrorist Oscar Perez, who was eliminated in January after another spectacular failed attempt at undermining the Venezuelan state, set up the group late last year to be the beating heart of the quest for “regime change” in Caracas. After carrying out a full-fledged investigation of Perez after he was put down like the dog he was, SEBIN uncovered that he and his goons were reporting directly to ‘Israel’ and receiving everything from weapons training to money, political directives to intelligence from Mossad. This shouldn’t come as a surprise. Leopoldo Lopez, Henrique Capriles Radonski, Antonio Ledezma and other oppositionist traitors have intimate relations with the Jewish supremacist tumor. El Comandante Hugo Chavez (rip) opened talked about ‘Israel’ funding the counterrevolution inside the Bolivarian heartland as well as having Mossad agents inside the country and in the Caribbean plotting to kill him. Now, the international Zionist death squad is trying to kill Maduro too. And make no mistake, considering the Trump regime’s vested interest in overthrowing the Bolivarian Revolution — from putting sanctions on Tareck El Aissami to funding the Green Helmets to openly plotting a military invasion — America definitely had a hand in this attempt on Maduro’s life too. Should also be noted that the total radio silence as of right this moment from both Washington and “Tel Aviv” is evidence in and of itself of their involvement in the attack and due to the screw-up, they’re now scrambling on how to deny and spin it.

Anti-Zionist revolutionary and Venezuela ally Bolivian President Evo Morales summed up the situation perfectly, “We energetically repudiate this new aggression and cowardly attack. After failed attempts to topple Maduro democratically, economically, politically and militarily, now the Empire and its servants try to take his life.” Thank Almighty God that the American-Zionist Imperium blundered badly. And thank Almighty God again that Maduro, his wife and the defenders of the Bolivarian Revolution are all safe. This was the most brazen maneuver against Chavismo since the April 2002 coup that temporarily toppled Hugo before he miraculously returned by the literal will of the Venezuelan people. Zionist Jews Elliot Abrams and Otto Reich were behind the madness then. Who are the neocon gangsters responsible today? All will come out in due time no doubt but what is available currently points the finger and sticks it right in the faces of America and ‘Israel’–the curses of our Creator be upon these miserable and malevolent entities. Stay strong, ya Nicolas. The Mouqawamist peoples of the world are watching, praying and on your side. The Bolivarian Revolution — nishkour ALLAH (SWT) — lives to fight another day.