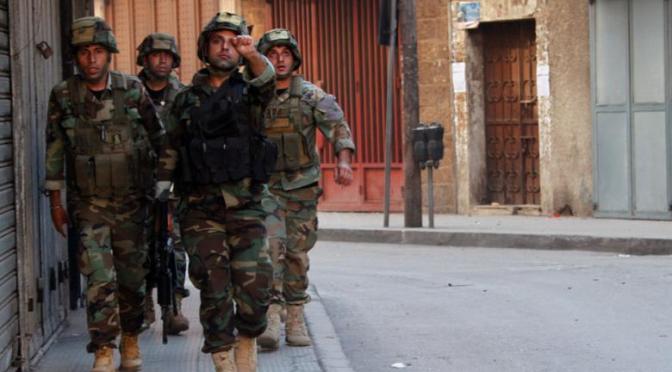 (EDITOR’S NOTE: A typically solid report from Radwan Mortada but we at Mouqawamah Music strongly object to the phraseology used here, i.e. the description of the depraved Takfiris as “Jihadis” and/or “Jihadists”. Indeed, we abhor and reject this phraseology generally speaking. Even many within the “resistance camp” and “alternative media” spew these words at will and it is both incorrect and an aberration of their true meaning. Hizbullah, the Qassam Brigades of Hamas, Islamic Jihad, the Iranian Revolutionary Guard Corps, etc., all refer to their disciplined, righteous, Islamic fighters as “Jihadis” and/or “Jihadists” because they are engaged in Jihad against the most shaytanic enemy known to mankind: World Zionism. Translated into English as “struggle”, Jihad is a Qur’anic-Islamic concept that is rooted in walking the path laid out for us by ALLAH (SWT), literally “struggling” in His (SWT) way. Jihad can be understood in perfect dichotomy as Jihad al-Akbar, “the greater struggle”, which is the struggle within one’s self against the ego, and Jihad al-Asghar, “the lesser struggle”, which can manifest itself politically, militarily, poetically, and numerous other ways, depending on the arena in which one is confronting the enemies of Islam. A Jihadi/Jihadist/Mujahid, truly defined, is one who has mastered Jihad al-Akbar, and since he/she has bested his/her ego in combat, he/she can now engage the enemy in Jihad al-Asghar. The Takfiris are too far disconnected from Islam to understand such things, and if they were around in the time of the Holy Prophet Muhammad (S.A.W.W.), they would undoubtedly be the ones clinging to the Jahiliyyah and fighting him.  With all this said, journalists, analysts and commentators must stop using Jihadi/Jihadist/Mujahid to refer to these demonic creatures doing the bidding of the Jewish gangster regime occupying Palestine and NATO, it’s an insult to real Jihadis like the brave men of Hizbullah. ~ Jonathan Azaziah)

Jihadi groups have not learned their lesson from their experiences in north Lebanon. They repeat the same mistakes and end up with the same outcome. What drives an armed group that adopts a certain cause, whether just or not, to wage a battle which it knows ahead of time is a losing battle?

No two people would disagree about the outcome of the most recent round of clashes in Tripoli. The army was able to defeat the gunmen. The outcome is unambiguous, at least in terms of appearances. The Lebanese army succeeded in driving the gunmen underground and removed all signs of their former existence. It set up checkpoints and carried out raids in areas that were forbidden to it in the past even if it cost the lives of 12 officers and soldiers, while there were no heavy casualties among the gunmen.

The most surprising opinion that jihadis expressed when asked about the latest confrontation is their open admission that the outcome of the battle was expected even though they lauded, “the jihadis’ ability to hurt the army and inflict heavy losses on it because it is weak, exposed and not ready for street battles.”

Jihadi leaders agree that the loss was expected and that it dealt a “heavy blow to the Muslim youth in the north.”

Discussion of what happened is not restricted to the north, but includes the Bekaa, the south and refugee camps where there are hardline groups. Jihadi leaders agree that the loss was expected and that it dealt a “heavy blow to the Muslim youth in the north.” Based on the latest confrontation, some groups are conducting evaluation sessions in public meetings and on social networking sites. They concede that the confrontation was ill-timed but say an incident outside their control drove these groups to behave immaturely and emotionally. They stress, however, that “moving forward was coordinated and planned because there was no room for retreat.” The incident they are referring to is the army arresting members of the Asoun cell led by Ahmed Salim Mikati who is a wanted man. A member of al-Nusra Front operating in Lebanon told Al-Akhbar that “Sheikh Abul Huda Mikati’s group initiated the battle in the souks in coordination with supporters of the Islamic State in Iraq and Syria (ISIS) in the north after he was arrested.” He added: “The rest of the groups were involuntarily drawn into the confrontation because they did not want to be accused of failing to show support.”

But what about the civilian support base? The answer was almost unanimous among several jihadi leaders in Lebanon and al-Qalamoun: “Jihadi groups in Lebanon never had a support base.”

Based on this presupposition, these leaders realize that “if the facts on the ground remain as is, it is impossible to change the situation in Lebanon in favor of the jihadis.” Recalling the alienation they live with inside their communities, they say “our groups are weak and unable to engage in a comprehensive confrontation in the absence of a rear base along the border to provide support.” For them, even if the battle in the north “were to last for a long time, it is ultimately a losing battle.”

Talking about the latest events in the north, sources reveal that “attempts were made to avoid them but the young men got carried away,” adding that “the weakness of the army whet the gunmen’s appetite to prolong the confrontation.” They point out that fighters of al-Nusra Front joined the battle to support fighters of ISIS. While most of the clashes were not pre-planned, the sources point out that “all those who participated in the clashes did not stick to the roles assigned to them.” They emphasize their inability to have an all-out confrontation under the current circumstances, arguing that “what is needed at this point and until the picture clears up is concentrated security work as part of the whole picture.” They also talk about “undisciplined behavior on the part of Shadi al-Mawlawi, particularly, revealing that Sheikh Abu Malik al-Talli prevented the release of the kidnapped soldier.” As for the declaration of a “Sunni revolution” by the imam of the Haroun Mosque, Khaled Hoblos, the sources say he was compelled to make it otherwise he would have been accused of weakness.

What is the point of waging a losing battle?

If these groups do not learn their lesson from previous experiences, like the Dinniyeh group, Fatah al-Islam and Sheikh Ahmed al-Asir’s group, then how do they think and what standards do they use? Doesn’t the repeated miscalculation of military and human capabilities cast doubt on the wisdom of these leaders and prompt their followers to abandon them? The answer is unconvincing. A member of al-Nusra Front says: “We know everybody is against us but we do not care about them. The whole world came together to fight us but we do not fear the blame of a critic and the strangers of Fatah al-Islam is a recent example.” But how does this rhetoric translate on the ground? Doesn’t it abort the possibility of building a force capable of making a change? He replies: “It is our obligation to revive the compulsory duty of jihad to end the humiliation of our Muslim nation and raise the flag of Islam. We rely on God for the outcome who promised to empower us to cleanse the earth.