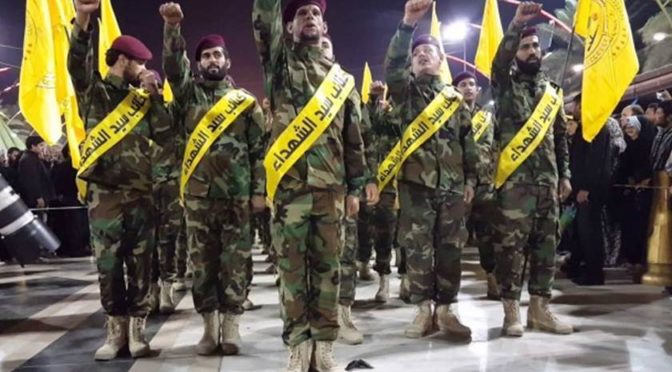 Another proud day to be an Iraqi. Abou Walaa al Wa’eli, Secretary-General of Iraqi Islamic Resistance group Kata’ib Sayyed al-Shouhada, delivered an impassioned speech over the weekend in which he ripped into the toxic Saudi regime and saluted the Yemeni Islamic Resistance like nobody before him ever has. Not even Sayyed Hashim al-Haidari. Not even Abou Azrael, who has hosted multiple Ansarullah delegations. What the battlefield legend said verbatim was, “I announce here today that Kata’ib Sayyed al-Shouhada is a brigade among your brigades, o’ Ansarullah. Our men who anticipate and look forward to martyrdom for our land, also anticipate and look forward to martyrdom for your land. I declare that I am nothing but a lowly soldier anxiously standing at the signal of Sayyed Abdul Malik al-Houthi!” Yemen’s Sayyed responded with gratitude and humbleness in a statement yesterday, telling Kata’ib Sayyed al-Shouhada that, “We express our thanks and appreciation to the free and loyal people of Iraq. Just as you are with us, we swear by God that we are with you!” If that doesn’t make the hair on the back of your neck stand up, you must have lost your ability to feel. The Iraqi-Yemeni bond is beyond just tight and strong at this point. It has now entered a realm of boundlessness.  END_OF_DOCUMENT_TOKEN_TO_BE_REPLACED 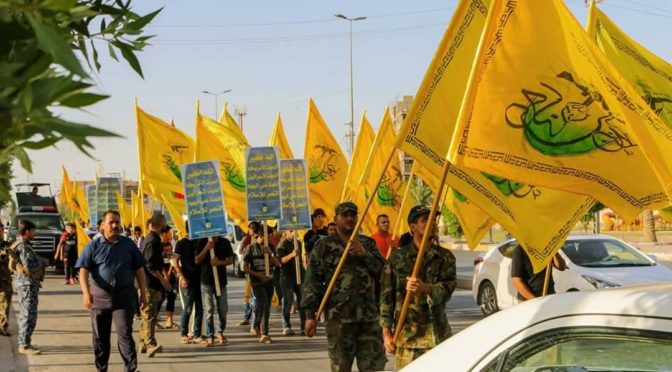 No limit for the love I have for my countrymen, the warriors of Iraq’s Harakat Hizbullah al-Nujaba (HHN). Here they are, fighting on not one, not two, but THREE fronts–the homeland, scouring numerous Iraqi cities for the remnants of Daesh and picking apart Zionist spy networks; all across Syria, assisting the Syrian Arab Army to finish off the Takfiri scourge; and the occupied Golan Heights in direct confrontation with the ‘Israeli’ enemy, continuing to prepare for the upcoming battle to liberate the area–and yet what do they do in the midst of it all?! Launch an impromptu festival in the holy city of Karbala to honor the Yemeni people, the Yemeni Resistance and the Yemeni struggle against Zionist Al-Saud!! Attended by representatives from both the Sunni and Shi’a communities, including prominent Mouqawamist Sayyed Hashem al-Haidari, in a large and important showing of Islamic unity, HHN is determined to live up to Ayatollah Sayyed Muhammad Baqir al-Sadr’s (R.A.) standards of raising your fist for the downtrodden no matter how oppressed YOU happen to be. Indeed, HHN’s message couldn’t be anymore elucidated: Iraq and Yemen are two fingers on the same fist punching through the three-headed beast comprised of America, ‘Israel’ and Saudi Arabia. Iraq and Yemen are intertwined in blood and defiance. Iraq and Yemen are day in and day out seeing their Martyrs depart this miserable world and head towards somewhere better… Hand in hand. There is no separation between the Iraqi and Yemeni struggles. And no matter what battlefield Harakat al-Nujaba’s moujahideen are on, Yemen never stops moving through their hearts like shooting stars. END_OF_DOCUMENT_TOKEN_TO_BE_REPLACED 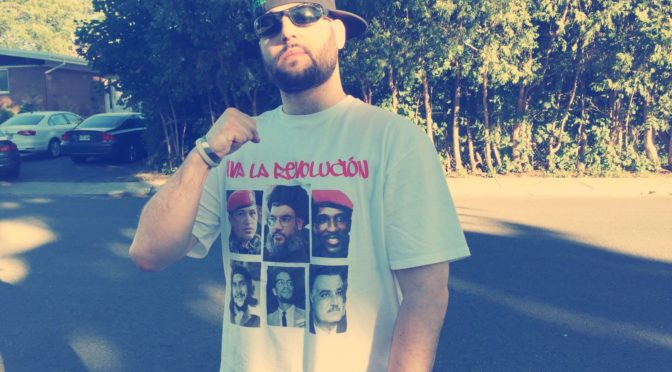 If the parasites at B’nai B’rith and all the other Zionist outfits that joined their cacophony of fallacious drivel actually thought that I’ve just been twiddling my thumbs over the last 10+ months, then they thought dead wrong. I have been writing up a STORM. Something like a monsoon, a typhoon, a hurricane and a cyclone all wrapped into one Anti-Parasitic sonic smackdown. Did you guys know that Tupac Amaru Shakur, just before he was murdered by B’nai B’rith’s JDL buddies alongside their collaborators Suge Knight, his network of dirty, corrupt LAPD detectives, his Jewish overlords David Kenner, David Chessnoff and Richard Schonfeld, as well as the FBI, wrote an insane 67 songs in 11 months? Well. I followed the martyred Hip-Hop great’s example and have written 71 songs over 4 albums since the Monsters came after me last July. The first of these works is “Iraqi Ghirasi (The Wrong Goy)”, which I completed on Hizbullah’s Martyred Leaders Day (February 16th) earlier this year and it is my rage against the Zio-Machine made manifest. I tackle much of what the Monsters put me through on the intro track, “Section 318”, fire off a fierce rebuke of the demons on “The Anomaly Strikes Back”, pick apart the ‘Israeli’ enemy’s Talpiot and Unit 8200 programs on an intense series titled “J-Spy”, team up with my most beloved brother Khanverse KV for a track called “Triple Homicide” and so, SO much more. END_OF_DOCUMENT_TOKEN_TO_BE_REPLACED 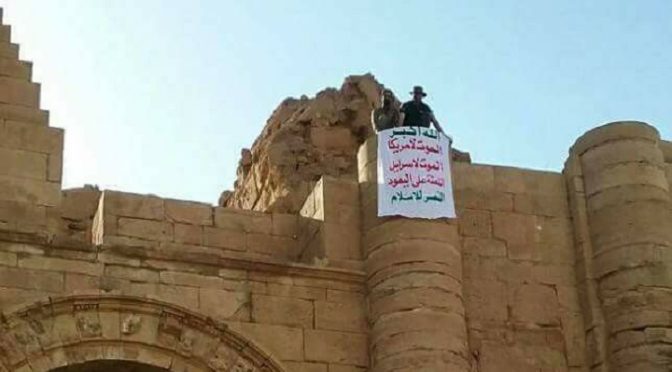 Have I ever told y’all how much I adore my people?! <3 🙂 Pictured here is a moujahid from Iraqi Islamic Resistance group Harakat Hizbullah al-Nujaba (HHN) hanging the banner of Ansarullah, the Yemeni Islamic Resistance, in a liberated section of Mosul. The American regime has desperately attempted to sideline the Iraqi Popular Mobilization Units (of which HHN is a part), as a means of expanding the Washington ZOG’s influence throughout Iraq, but has miserably failed. Those who suffered under US-‘Israeli’-backed ISIS occupation KNOW, in their hearts and deep in the marrow of their bones, that it was the dauntless men of the Iraqi Resistance who liberated them from their torment, not the Zio-Imperialist powers which injected terrorism into Iraq to begin with. Love, appreciation and most importantly, synergy between the Mobilization and Iraqi civilians can be found across Mesopotamia. The residents of this Mosul neighborhood not just allowing HHN to parade the Houthis’ slogan of perfection, but encouraging it, is merely one example. This gesture by the HHN fighter is a defiant display of solidarity with Yemen and an acknowledgement of our common worldview as well as our common enemy: Al-Saud fights the people of Mouqawamah directly in Yemen whilst fighting the people of Mouqawamah by proxy in Iraq, with both wars on both our peoples being criminally waged on the usurping Zionist entity’s behalf. END_OF_DOCUMENT_TOKEN_TO_BE_REPLACED 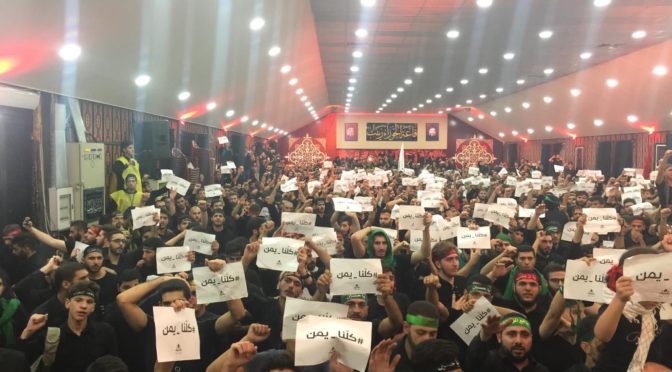 Long live the resistant Lebanese Shi’a of Dahiyeh (Beirut’s Southern Suburbs)! In the middle of an Ashoura procession, news about Saudi Arabia’s massacre of 700+ Yemeni civilians at a Sanaa funeral came in over the wires and immediately thereafter, the ever-defiant people starting belting out “Koulina al-Yemen!”, which literally translates to “WE ARE ALL YEMEN!” Talk about being overwhelmed with the spirit of Imam Hussein (A.S.) and his late descendant Sayyed Hussein al-Houthi (R.A.)! There has been support for the Yemeni struggle against the Saudi regime from the Islamic Republic of Iran and the Iraqi Popular Mobilization, specifically from Harakat al-Nujaba chief Sheikh Akram al-Kaabi and Imam Ali (A.S.) Brigade Commander Abou Azrael. There has been backing from the Syrian Arab Republic, Sheikh Ibrahim Yaqoub al-Zakzaky of Nigeria and Palestine’s Islamic Jihad as well as the PFLP. But no people in the world have defended Yemen and raised their voices with eardrum-busting loudness for Ansarullah and the Yemeni people quite like the Lebanese and their heroic Mouqawamah. None. END_OF_DOCUMENT_TOKEN_TO_BE_REPLACED 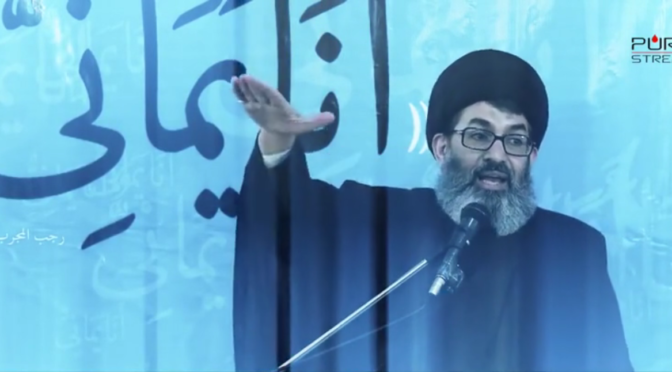 Sayyed Hashim al-Haidari just may be Iraq’s brightest light. The righteousness, faith, sincerity, passion, love for the Moustazafeen (the oppressed people), hatred for the Moustakbireen (the oppressors), hope and ancient eloquence of Bilad al-Rafidayn shine through in all the oratories he delivers. The Iraqi Resistance leader is truly a firebrand in every sense of the word. His latest speech, which focuses on Yemen, is at once a blistering verbal annihilation of Dönmeh Al-Saud and a breathtaking show of support for the Yemeni Mouqawamah led by Ansarullah. Towards the end, when the Iraqi Sayyed declares that if Ayatollah Sayyed Ali Khamenei and Hizbullah Secretary-General Sayyed Hassan Nasrallah give the order for the forces of Resistance to go to Yemen, then Iraq’s moujahideen will follow with their hearts, prayers, thoughts, tongues and weapons, I simply got the chills right down to the bone. If only one billionth, that’s it, just ONE BILLIONTH of the world’s Muslims spoke with the same ferocity and truthfulness that Sayyed Hashim al-Haidari speaks with vis-a-vis Yemen, the US-UK-‘Israeli’-backed Saudi regime wouldn’t have even dared to begin an aggression against the Yemeni people. But you know what? That’s okay. Because the Iraqi Sayyed’s thunderous voice by itself shakes the Earth like one of Ansarullah’s homemade Qaher-1 ballistic missiles shakes the cowardly Saudi army. And his thunderous voice by itself makes up for all those sorry excuses for humans who abandoned Yemen at its most critical hour. May ALLAH (SWT) make Sayyed Hashim al-Haidari’s fire burn brighter than ever and make his words like winged swords that fly throughout the Ummah and continue cutting Al-Saud down to size. END_OF_DOCUMENT_TOKEN_TO_BE_REPLACED