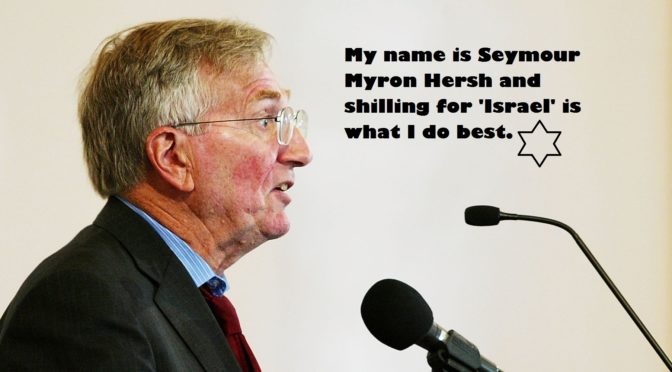 Seymour Hersh is a sneaky, sneaky Zionist subversive. During the early stages of the hegemonic powers’ criminal invasion of Iraq when the Abu Ghraib scandal arose, Hersh wrote a couple of critically-acclaimed pieces in the New Yorker–a Zionist rag if there ever was one–supposedly “documenting” how all the torture was the fault of two men, the war criminals Donald Rumsfeld and Stephen Cambone. What Hersh deliberately failed to mention however, firstly, was that Rumsfeld himself was nothing but the mere front man for Cerberus Global Investments, an immensely powerful holdings firm run by the Jewish supremacist billionaires Michael Steinhardt and Stephen Feinberg, and Cambone was just the literal underling of ultra-Zionist Douglas Feith. And secondly, Hersh COMPLETELY left off the fact that the barbaric, utterly satanic torture tactics used on Iraqis in that hellhole were in fact ‘Israeli’, taught to the American occupation military by IOF, Shin Bet, Mossad and Aman “experts” (read: torturers of Lebanese and Palestinians) brought in by the Jewish neocons Paul Wolfowitz, the aforementioned Feith, Richard “Prince of Darkness” Perle, William Schneider, Abram Shulsky (who ran the OSP) and others. END_OF_DOCUMENT_TOKEN_TO_BE_REPLACED