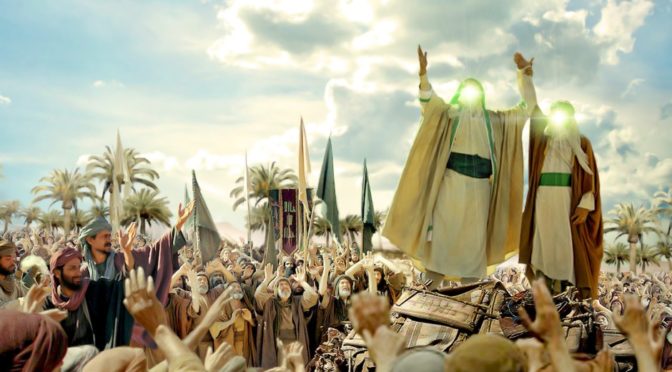 Eid al-Ghadeer Mubarak to the Islamic Republic of Iran. The Lebanese Islamic Resistance of Hizbullah. The people, army, government and President of the Syrian Arab Republic, especially the steadfast citizens of Al-Foua’a and Kefraya who are celebrating their first Eid al-Ghadeer in 3 years and 4 months since the Zio-Takfiri siege was lifted. The Iraqi Popular Mobilization Units, chiefly Kata’ib Hizbullah and Harakat Hizbullah al-Nujaba. The Yemeni Islamic Resistance of Ansarullah. Pakistan’s Zaynabyoun. Afghanistan’s Fatemiyoun. And all free, independent, Godwary and Mouqawamistic-minded souls wherever they are in the world who adore Imam Ali (A.S.) with their everything and stand with those individuals, states and movements who reflect his love of justice in totality: The Axis of Resistance. END_OF_DOCUMENT_TOKEN_TO_BE_REPLACED 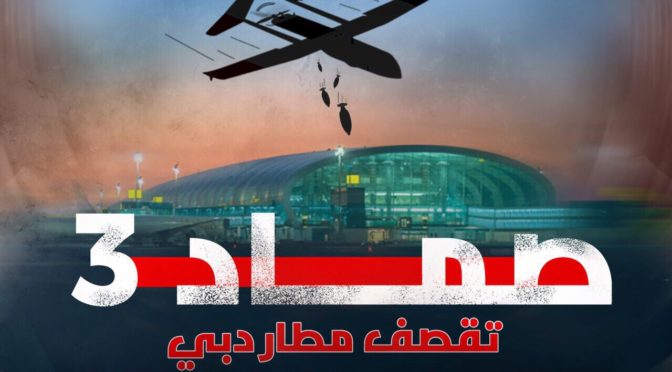 Long live the Sammad-3! Yes indeed! LONG LIVE THE SAMMAD-3! Ansarullah’s indigenously-produced attack drone, named after Ansarullah legend and martyred Yemeni Supreme Political Council President Saleh al-Sammad (R.A.), has struck the international airport of the Emirati tyrants’ economic capital: Dubai. After heavy monitoring of the arena by Yemeni Islamic Resistance intelligence operatives, the Sammad-3 was launched for the 1,200+ kilometer journey into UAE airspace. Upon reaching its destination, bypassing all of the Emiratis’ security-surveillance measures–a major feat in and of itself–the Ansarullahi UAV fired multiple missiles on the aerial facility, causing tremendous damage and disrupting air traffic for several hours. The hit to the Emirati economy is in the hundreds of millions. END_OF_DOCUMENT_TOKEN_TO_BE_REPLACED 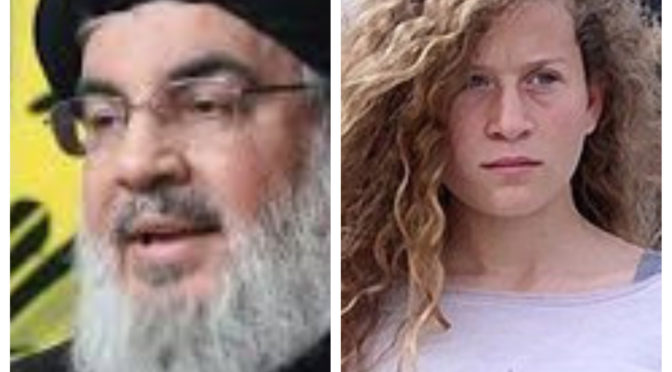 During his Martyred Leaders’ Day speech on February 16th, Hizbullah Secretary-General Sayyed Hassan Nasrallah sent salaams and heaped praises upon Palestinian Resistance heroes Omar al-Abed (who stabbed and sent three ‘Israeli’ land thieves to hell in defense of Al-Aqsa; he has been imprisoned for life by the occupiers), Al-Shahid Ahmad Jarrar (who lit up an illegal Jewish colony and sent one occupying demon to hell; he was martyred by IOF whilst reading the Holy Qur’an) and of course, Ahed Tamimi. Of the fiery and freckled female eagle, Sayyed Abou Hadi said, “The position taken by the young girl Ahed Tamimi is brave and especially courageous. This is a girl who is fearless as she confronts the ‘Israeli’ occupation soldiers and slaps them, inspiring many to replicate her example.” END_OF_DOCUMENT_TOKEN_TO_BE_REPLACED 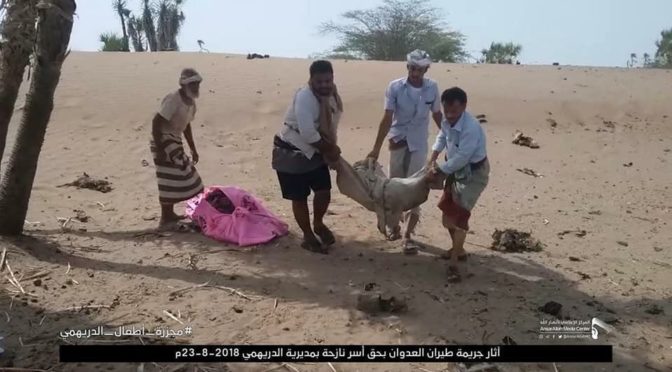 Two weeks ago, Al-Saud bombed a school bus full of children on their way to summer camp in Yemen’s Saada where they were learning and memorizing the Sublime Qur’an. “Custodians of the Two Holy Mosques” my foot. Now the regime of Muhammad Bin Salman has bombed an Internally Displaced Persons (IDP) camp in Yemen’s besieged Hudaydah, targeting women and children. “Feminist reformer” my shoe. This latest massacre by the Saudi dictatorship struck the district of Al-Durayhimi. At least 22 children were slaughtered, along with 4 women and 4 men. Dozens of others were wounded. And it was executed with full-blown American support, thus making it a crime of the Washington ZOG first and foremost. Another lurid detail–cruelly invoking the Zionist entity’s war on Gaza in ’14 that wiped out 89 families--is that most of the martyrs and injured were from the same family, that of a man named Abdullah Dahfash. Saudi Arabia’s bombs fell on top of his house and killed his brothers instantly. Then the warplanes of the Wahhabi tyrants circled back and hit the camp again, murdering the kids and the women. Barbaric is a terrible understatement. This inhumanity, like the Saada School Bus Massacre and the evisceration of at least 13 Yemeni fishermen also in Hudaydah a few days ago, is right from the blackened, burning, baneful heart of Al-Shaytan himself. END_OF_DOCUMENT_TOKEN_TO_BE_REPLACED 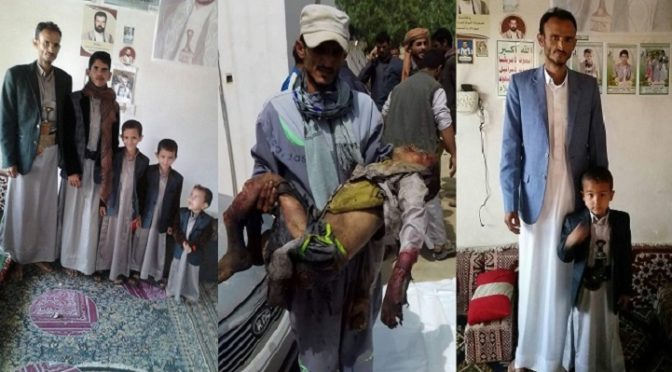 Fast forward to the present when tragedy struck. That’s the middle photo. On August 9th, the monstrous, blood-drenched House of Saud bombed a school bus full of children in Dahyan as it passed through a market back to summer camp where Yemeni youths were learning and memorizing the Holy Qur’an. At least 51 children–most of them under 10–were slaughtered and more than 79 others were wounded in the massacre carried out by the Saudi “royals” with US-ZOG-provided armaments. As he had done so many times before, Mr. Tayyeb rushed to the scene minutes after the American-Saudi-Zionist crime to help recover the bodies of martyrs and assist with the injured in hopes of preventing anymore deaths. The carnage was mind-boggling. Little children beheaded, dismembered and lifeless everywhere. Bloody coloring books and backpacks scattered across the streets. Mr. Tayyeb combed through the wreckage looking for survivors and instead… Found his son. Dying inside but persevering nevertheless, he solemnly carried the child’s broken and battered frame to safety. Then he found his other son. Then his brother, who had been chaperoning the picnic the children departed from before the Wahhabi tyrants took their lives. That he had the strength not to shatter after finding his slaughtered kin and then also continue to help other devastated parents… is proof positive that chivalry is far from dead. Indeed, chivalry’s very essence is Yemeni. END_OF_DOCUMENT_TOKEN_TO_BE_REPLACED 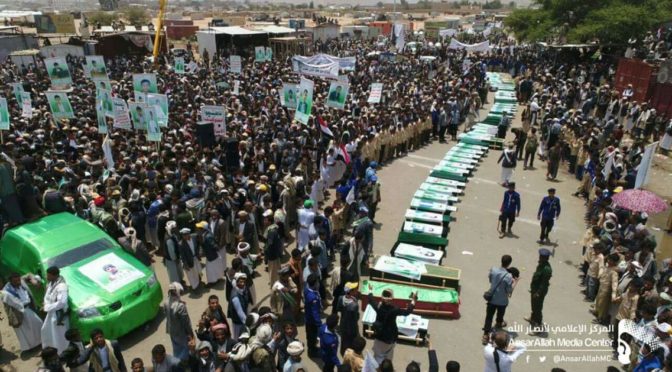 51 little coffins. 51 more reasons why the House of Saud should cease to exist. A beloved Yemeni brother of mine told me earlier that he hates the very thought of it so much that it’s hard for him to deal with emotionally so he just blocks it out instead. Another dear Yemeni friend said that the sheer sight has made him so physically sick that he hasn’t been able to keep his food down since Monday and is running strictly on water just to get by. I’m right there with them. It’s excruciating and unfathomable. 51 little coffins for 51 little children that the people of Yemen buried 48 hours ago in Saada following Saudi Arabia’s utterly shaytanic bombing of a school bus passing through a market last week in the Zaydi holy city of Dahyan. The atrocity was committed with American weapons, American intelligence and American logistics. The filthy Brits and even filthier ‘Israelis’ were part of the crime against humanity too. END_OF_DOCUMENT_TOKEN_TO_BE_REPLACED 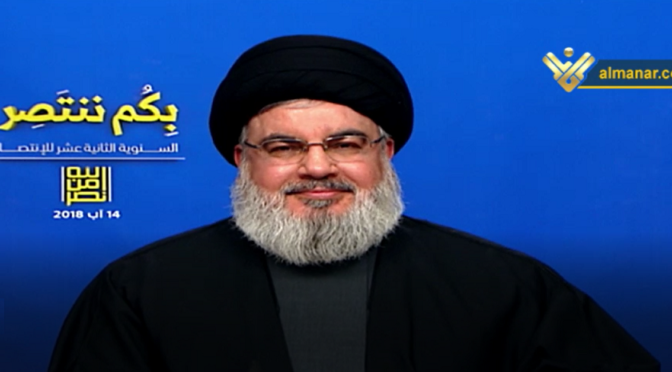 Have I told y’all lately that I love Sayyed Hassan Nasrallah?! If not… Then let me tell y’all: I LOVE SAYYED HASSAN NASRALLAH! Don’t you love Sayyed Hassan Nasrallah?! Well. If you don’t… Then you need help ’cause you damn well should! Speaking today to commemorate the 12th anniversary of Hizbullah’s Divine Victory over the usurping Zionist entity over 34 days of perfectly executed asymmetrical warfare in 2006, the Sayyed of Sayyeds rocked it and socked it; he smashed it and thrashed it; he crushed it and grooved then he busted a move. It was the classic Nasrallah wit. The typical Nasrallah wisdom. And the quintessential Nasrallah fire that has set the enemy ablaze from the moment he took over the mantle of Hizbullah Secretary-General following Sayyed Abbas al-Moussawi’s (R.A.) martyrdom at the gnarled hands of ‘Israel’ on February 16th, 1992. END_OF_DOCUMENT_TOKEN_TO_BE_REPLACED 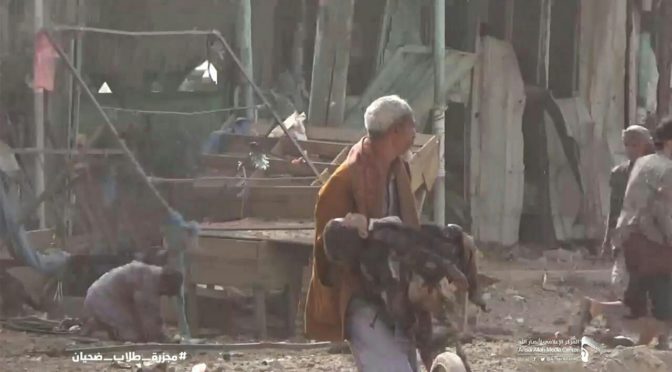 The righteous wrath of ALLAH (SWT) and the crushing storms from His heavens be upon the accursed House of Saud. In what will register as one of the sickest, most twisted and most gruesome atrocities in the 3.5 years of its genocidal aggression against Yemen — which is saying quite a bit because there have been SO many ungodly massacres — the Wahhabi tyrants occupying the Hijaz bombed a school bus full of children in Saada’s Dahyan as it made its way through a market towards summer camp. Saudi Arabia murdered at least 51 kids in the air raid — the vast majority of them under 10 years old — and badly wounded over 79 other civilians — the vast majority of them kids under 10 years old too. The martyr count is going to go up because the injuries are horrific, the siege continues to cripple Yemen and the supplies necessary to save lives just aren’t available. Scenes of the carnage plastered all over social media are just about impossible to look at. Screaming and bleeding children. Tiny bodies blown to bits and missing limbs. Incomprehensible sadness on the faces of parents who lost what was dearest to them and medical professionals who couldn’t save lives despite their best efforts. The depth of depravity that one has to sink to murder children over… and over… AND OVER again… is unfathomable. And the evil and hellishness that have to exist in one’s mind to then actually rationalize the barbaric spilling of these little ones’ blood is irredeemable. END_OF_DOCUMENT_TOKEN_TO_BE_REPLACED 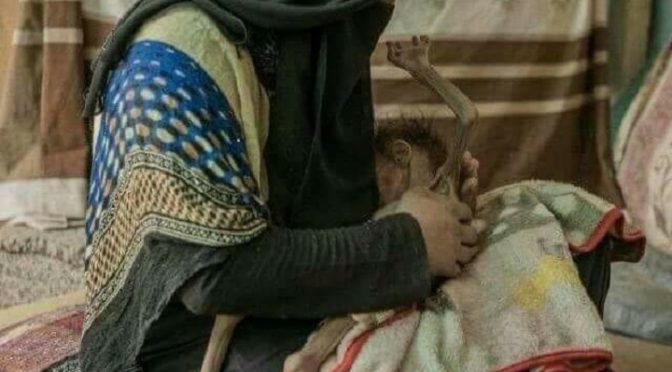 No, not ‘Israel’, Saudi Arabia, the UAE, the rest of the GCC and the American, British, French, Canadian, Australian and German ZOGs. Not traitorous Abed Rabbo Mansour Hadi, his goons, AQAP, Daesh, the treasonous and servile South Yemen secessionists and all the political personalities regionwide claiming to stand with (a wholly illegitimate) “legitimacy”. Hatred for these Dajjalic forces is a given and as natural as breathing air. END_OF_DOCUMENT_TOKEN_TO_BE_REPLACED 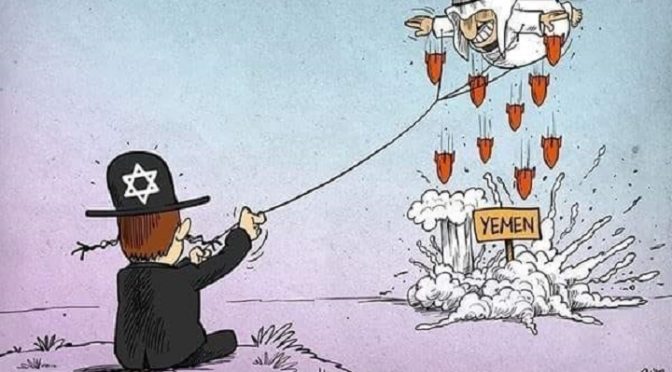 Isn’t it time that we identify Saudi Arabia and the United Arab Emirates as provinces of the usurping Zionist entity? Saudi ‘Israelia’ or Yahoudi Arabia would work for Riyadh and the United ‘Israeli’ Emirates or United Arab Rabbinates would work for Abu Dhabi. Both of these putrid regimes really are just extensions of “Tel Aviv” and what they did in Yemen’s Hudaydah earlier Thursday afternoon is the proof. Saudi-led coalition warplanes bombed Al-Thawra Hospital and its immediate vicinity, including a fish market, murdering at least 56 Yemeni civilians and wounding over 130 others. Pregnant women and teenagers are among the casualties. And this is just the martyr count as of this moment. But considering the typically large number of women and children hurt in the horrific attack and the lack of medical supplies getting into the port because of the ongoing US-UK-‘Israeli’-backed Saudi-Emirati blockade, there is no doubt that the numbers of dead are going to increase. The Yemeni Health Ministry revealed that this was an IOF-style “double-tap” strike. Meaning that these Zio-Wahhabi monsters hit the hospital with American-and-British-provided bombs… Then circled around to hit the same civilian area — yes, CIVILIAN area, there are no moujahideen from Ansarullah near this particular place – again, destroying an ambulance entering the gate of the medical center and slaughtering even more innocents. END_OF_DOCUMENT_TOKEN_TO_BE_REPLACED