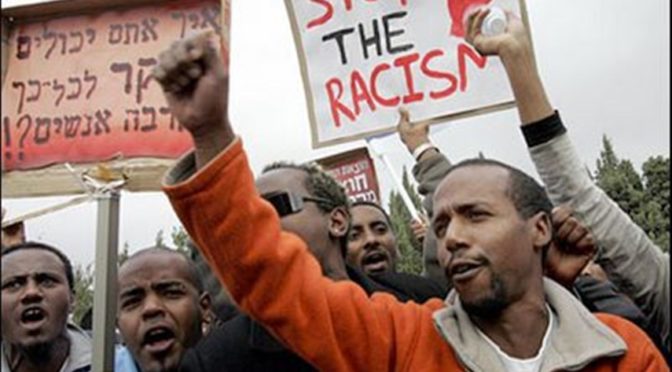 ‘Israelis’ really are the filthiest, most deplorable creatures on the face of this planet, aren’t they? War criminal, terrorist and baby-killer Menachem Begin infamously referred to Palestinians as “beasts walking on two legs” but as the case is with most of the vileness the Jewish supremacist cancer and its stalwarts accuse Arabs, Muslims and Gentiles of, he is projecting. It is in fact the ‘Israelis’ who are the “beasts walking on two legs” and the following revelation is the umpteenth confirmation of it. Rabbi Eliyahu Asulin, a mohel–i.e. Jewish circumcision practitioner–“from” the criminal settlement called Hadera (one of the earliest Zionist colonies), is sending his students around the ’48 lands to PRACTICE circumcision on the children of Ethiopian and Sudanese refugees. According to Asulin himself, he and his motley crew of genital-mutilating monsters have performed thousands of these cuts and he considers it “holy work”. And Asulin has been caught on camera calling African asylum-seekers “cannon fodder” as well as referring to Sudanese specifically as “the worst. They’re as black as natives.” Scariest of all? Asulin isn’t the only rabbinical ravager doing this. There are countless others. END_OF_DOCUMENT_TOKEN_TO_BE_REPLACED