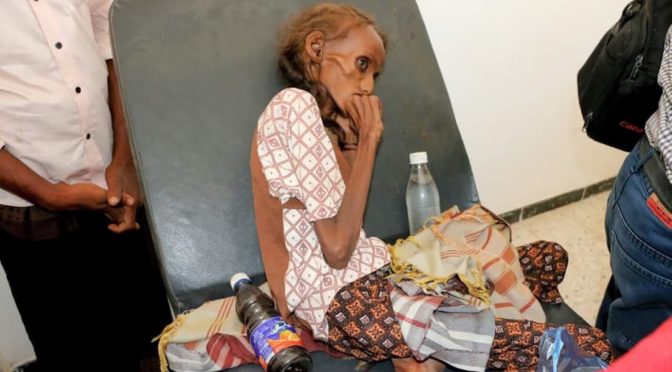 Say salaam to 18-year old Yemeni siege victim Saeedah. She’s from the coastal city of Hudaydah–part of the province of the same name–and is, clearly, suffering from a horrifying case of acute malnourishment. I normally don’t share photos like this because I find them to be denigrating to our beloved brethren, but since Yemenis are imploring us to do so to wake up the world about Saudi Arabia’s barbarity, I am following their lead because we should all be at their beckoned call. The reason why Saeedah is afflicted with this unspeakable condition is not because of Ansarullah as some infuriatingly dimwitted and even more infuriatingly sectarian “analysts” and “activists” have falsely noted. She’s starving to death… LITERALLY FADING AWAY TO LESS THAN SKIN AND BONES… Because the sanguinary, maleficent, rotten-to-the-core Saudi regime has bombed Hudaydah’s port and is blockading all foodstuffs, medicines and other humanitarian goods from entering the region. In addition to that, Al-Saud has bombed Hudaydah’s fisheries, one of the primary sources of food for the Yemeni residents, and set up a perimeter around the city with American, British and ‘Israeli’ assistance to keep the siege in a permanent state. Saeedah is going to die imminently and Dönmeh Saudi Arabia along with every last one of its Western backers will be awash in her blood. END_OF_DOCUMENT_TOKEN_TO_BE_REPLACED 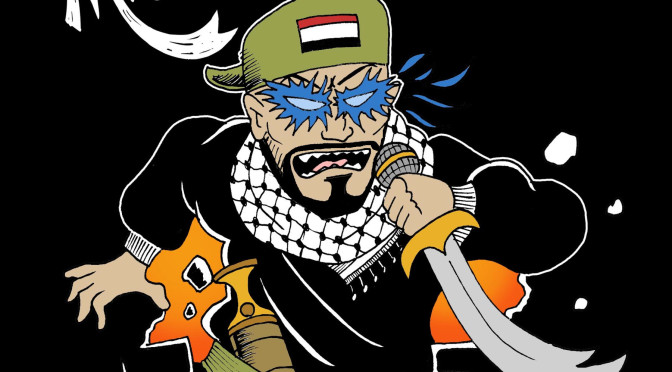 My ancient bruv from another muv Shan Cee FiftyOne aka He Who Signals The Truth asked me to write this so here goes. My fourth album, “Felicity Of The Oppressed”, is more than just an ode to Yemen in Beats-Rhymes-Life(form) or a mere collective of cohesive songs; it’s a lyrical movie… A Hip-Hop play in 3 acts that starts with a bang, tears your guts out, enrages you and then crescendos with a feeling of victoriousness that soothes and consoles. While every joint stands alone as an individual experience and I did indeed write it that way, F.O.T.O. is meant to be listened to in totality so you can grasp the fullness and connectedness of the concept: Yemen’s pain and suffering at the hands of Earth’s Most Evil, followed by Yemen’s struggle against these oppressors, followed by and concluding with Ansarullah’s triumph over the forces of Dajjal and the globalizing of their win which I am humbled to be part of. You don’t skip around when you’re watching a flick, do you? Because doing so, you lose critical plot points, right? Same idea applies here. END_OF_DOCUMENT_TOKEN_TO_BE_REPLACED