Shocked and appalled? Nope. Infuriated to the point my blood is boiling and curdling? Not anymore than I usually am and it usually is. I actually COULD NOT BE HAPPIER that ‘Israel’ passed the “nation-state” bill (full name of this criminal legislation is “Basic Law – ‘Israel’ as The Nation State of the Jewish People”). No, I didn’t smoke half a dozen rocks before writing this. Just bear with me and hear me out–there’s a method to the Maddness. ‘Israel’ has always defined itself as a “state” that is at once Jewish and “democratic”–an oxymoron. But by facilitating the codification of Jewishness – not ‘Israeli’-ness, but Jewishness – as the official nationality, Hebrew as the official language, “Hatikva” as the official “national” anthem, Jewish holidays as official holidays, the menorah as an official “state” symbol (note that international death squad Mossad uses the menorah for its insignia), the Jewish-Hebrew calendar as the official calendar, Jewish immigration (“Aliyah”; i.e. colonization) as the only immigration officially allowed, and Jewish expansionism as a “unique” and official “state” imperative under the guise of “(Jewish) national self-determination”… The veneer of “democracy” has finally been ripped off, stomped on, doused in lighter fluid, set on fire and then buried so deep not even worms can reach it. No more can any hasbara operative anywhere on the planet claim that “the Goyim” are lying about the true nature of ‘Israel’. END_OF_DOCUMENT_TOKEN_TO_BE_REPLACED 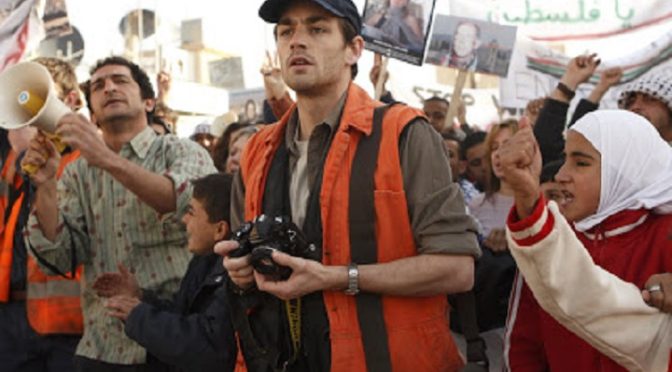 Rest in peace, power and purity to Thomas “Tom” Hurndall, a genuine friend of the Palestinian cause and beloved champion of the Moustazafeen, who joined the ancestors on this day 13 years ago. On April 11th, 2003, in the midst of the Second Intifada in the Gaza Strip’s Rafah area, Tom was taking Palestinian children in his arms to protect them from ‘Israeli’ occupation forces’ artillery and bombardments. He escorted many to safety. But in doing so, he also put himself in the line of fire and a murderous, usurping Jewish sniper shot him in the head. Tom remained in a vegetative state for over 9 months before passing away on January 13, 2004. We could speak on the cowardice of the ‘Israeli’ enemy and its inability to stand face-to-face and eye-to-eye with the indigenous and their international allies who reject its Jewish supremacist claims and regional hegemony; we could speak of its anti-Gentile hatred and its insatiable bloodlust as well. But it would better serve the memory of Mr. Hurndall and the Palestinians he gave his life defending to instead speak of his selfless commitment to Palestine’s liberation; his bravery in the face of his monstrous disease known as ‘Israel’; and the sacrifice he made for a land that wasn’t his but a people who he considered his brothers in humanity. The humble hero Thomas Hurndall was the essence of what the International Solidarity Movement (ISM) was supposed to be and for a while, truly was. END_OF_DOCUMENT_TOKEN_TO_BE_REPLACED