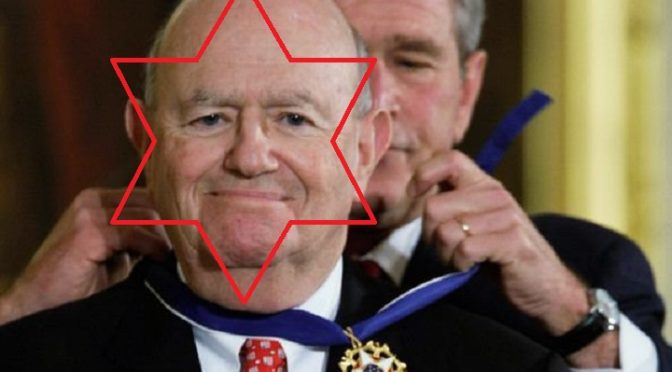 If you’ve spent the last near-decade reading Mask of Zion and Mouqawamah Music, not to mention listening to radio programs from The Ugly Truth and albums like “Son of Kufa Vol. 1: Rise Of The Anomaly” and “Eternally Husseini”, the names Wolfowitz, Feith, Perle, Abrams, Shulsky, Steinhardt, Feinberg, Kovner, Wurmser, Senor, Kagan, Kristol, Podhoretz, Beinart, Solarz, Lantos and many others from the clannish guild of criminals known as Organized, International Jewry should be more than familiar to you. It should be equally familiar to you that the genocidal destabilization and destruction of Iraq, launched on Purim, was a Jewish-Zionist operation down to the very smallest of its roots and molecules. One personality never blasted by this writer though, as the intent was to profile him on an individual basis–hence this piece–was the criminal who covered up the lies of the 2003 Purim War against Iraq, thus closing the circle and “absolving” the Jewish-Zionist-controlled regime of George Bush: Jewish neocon operator and senior judge of the United States Court of Appeals for the District of Columbia Circuit, Laurence Hirsch Silberman. Every great crime committed by ZOG needs an even greater burial. 9/11, another Jewish-Zionist operation from nuts to bolts, had Zelikow with the 9/11 Commission Report as well as Bialkin, Hellerstein, Birnbaum and Feinberg on the (il)legal end. The evisceration of Iraq had Silberman.