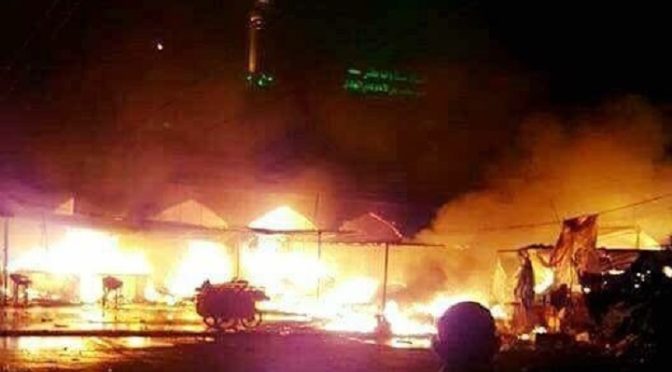 The blood ain’t dry in Karrada. The pure blood of more than 300 martyrs didn’t even dry yet in Karrada for God’s sake, we’re still counting, identifying and mourning our fallen, and these ISIS maniacs unleash their hellishness on Iraqis once again. This time the target is the shrine of Sayyed Muhammad Ibn Ali al-Hadi, the son of Shi’a Islam’s Tenth Imam (A.S.) and the brother of Shi’a Islam’s Eleventh Imam Hassan al-Askari (A.S.), in the Salahuddine Province town of Balad. First a suicide bomber blew himself up at the gate of the holy site and then terrorist gunmen opened fire on pilgrims in the midst of celebrating Eid al-Fitr. The martyr count is at least 37 and is expected to rise, as is the wounded count which currently stands at 62. This isn’t the first time Balad has been struck with murderous chaos. Just last May, MossadDaesh shooters opened fire on the Fourat Café, brutally and senselessly slaughtering 14 Iraqi Real Madrid fans gathering to discuss all the latest from the football world. Yesterday a harmless sports event. Today a sanctity. What will be hit tomorrow la sama7 ALLAH (God forbid)? It feels like there is no village, town, city or province in Iraq that doesn’t know bloodshed, heartbreak and trauma. END_OF_DOCUMENT_TOKEN_TO_BE_REPLACED