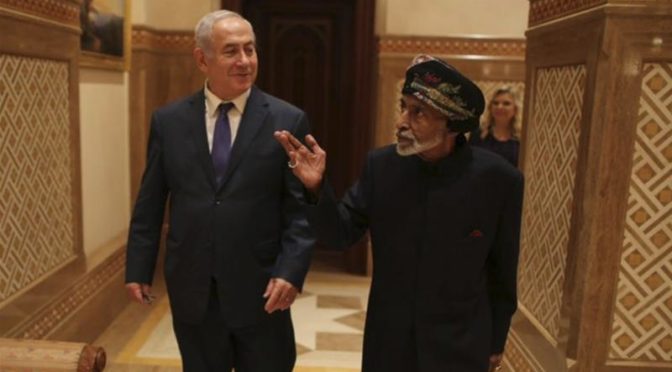 In a March 25th, 2017 piece entitled “Never Call Qaboos “Neutral” Again: Oman Joins Al-Saud’s Genocidal War On Yemen”, we here at Mouqawamah Music sounded off about the devilish nature and history of the Omani dictatorship led by “Sultan” Qaboos. His destructive role in Yemen, his ties with ‘Israel’, his allegiance to the British colonialist regime and his crushing of the PFLOAG rebellion were all exposed. Our rooftop screams fell on deaf ears unfortunately. Ain’t no way out of this one though. In a surprise visit to the strategic Persian Gulf state, baby-killer, butcher of Gaza, war criminal and Jewish supremacist fanatic Benjamin Netanyahu arrived in Muscat to deepen ties with the despot Qaboos as well as the “advancement of the peace process” along with “a number of issues of mutual interest to achieve peace and stability in the Middle East”. What all that gobbledygook really means is that the ‘Israeli’ terrorist-in-chief wants an Omani rubber stamp on the liquidation of the Palestinian cause in regards to the first matter, and Omani participation in the illegitimate Halakhic-Talmudic regime’s regional schemes in regards to the second matter. Qaboos the Queer is already aiding and abetting the Saudi-‘Israeli’ war on Yemen. Now “Tel Aviv” wants his help with the Islamic Republic of Iran. END_OF_DOCUMENT_TOKEN_TO_BE_REPLACED