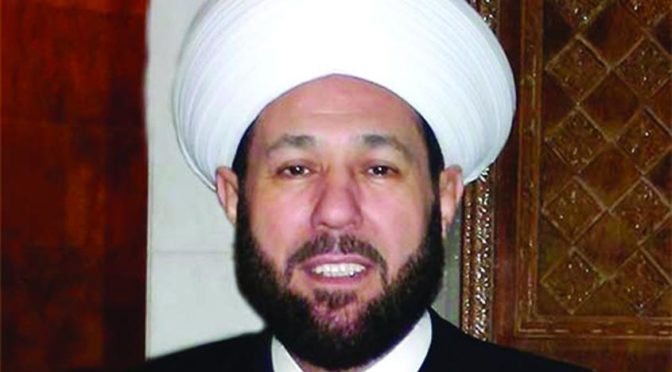 DAILY MAIL CRAZY FAIL: British-Zionist propaganda rag says Syria’s Grand Mufti is “the tyrant Assad’s top Alawi cleric” and claims that he, who they moronically misname as Ahmad Badr al-Hassoun, called for the “extermination of civilians” in Aleppo. Where to begin with this monstrously filthy hasbara? Firstly, you imbeciles, the man’s name is Sheikh Ahmad Badreddine Hassoun. Secondly, the Sheikh is Sunni, not Alawi. Thirdly, Dr. Bashar al-Assad is not a tyrant but the democratically elected president of Syria who your London ZOG overlords are insidiously attempting to overthrow. Fourthly, the Grand Mufti isn’t “Assad’s top cleric” but the highest Sunni religious authority in the entire Syrian Arab Republic and the beloved spiritual guide of ALL Syrians, not to mention other pro-Resistance folk throughout our region. Fifthly, you miscreants, Sheikh Hassoun did not call for the extermination of Aleppo’s civilians but the crushing defeat of the criminal terrorists who are ACTUALLY harming innocents and who have the Halab capital as well as every other part of Syria under siege; the criminal terrorists who, again, your Zionist-Imperialist masters on 10 Downing Street are using as a “regime change” battering ram. And lastly… You demented, absurd, gigantically stupid people make me sick.