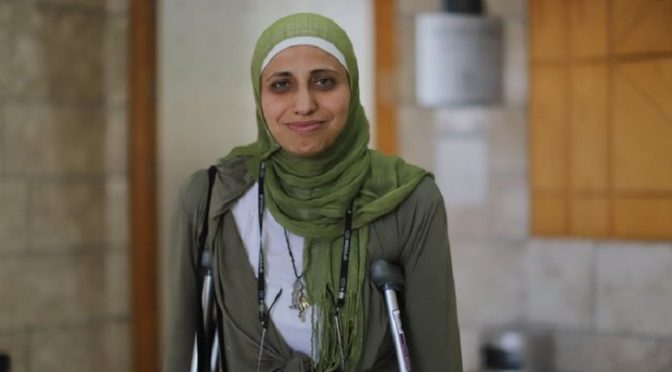 The poem is most certainly mightier than the occupation. 36-year old Palestinian poet Dareen Tatour has been sentenced to 5 more months in prison by the usurping Zionist cancer for a poem she wrote in Autumn of 2015 called “Qawem Ya Sha3bi, Qawemhoum (Resist, My People, Resist Them)”. She already spent 3 months in a Jewish dungeon after she was initially arrested in October of 2015 and has been on house arrest with invasive and despicable IOF monitoring for nearly 3 years since. Her prison sentence, which starts next Wednesday, isn’t the end of her nightmare either. As of this moment, she’s still banned from using the Internet and cell phones as well as publishing any of her poetry. Yes, this is exactly like a Zionized version of one of those dystopian, totalitarian sci-fi flicks Jewish Hollywood is always producing–only the dystopian totalitarianism of Jewish supremacy is very much real. An indigenous woman is going to prison — again — for writing a poem that calls on her fellow indigenous brethren not to make “peace” with the bloodthirsty, supremacist terrorists who have been stealing their land, hijacking their culture and destabilizing their region in one capacity or another for nearly a century and a half. END_OF_DOCUMENT_TOKEN_TO_BE_REPLACED