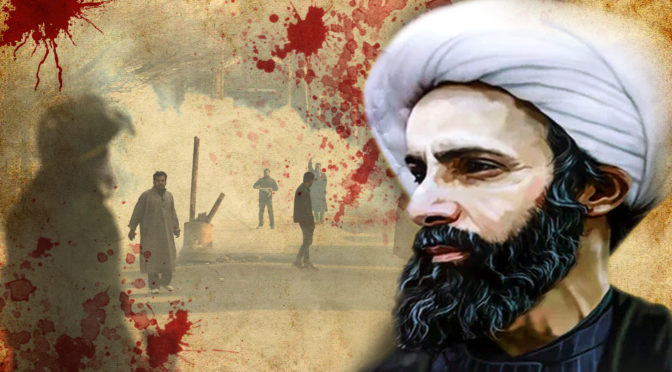 On this day one year ago, the monstrous Saudi regime crucified and beheaded Ayatollah Nimr al-Nimr (R.A.), the Lion of Qatif, the Angel of Awamiyah, for the “crime” of protesting against the tyranny of the Wahhabi monarchy occupying the Hijaz. Nimr did not shed any blood. Nimr did not call for fitnah, nor sedition, nor unrest. His only “aggression” was raising his voice and when it hit the pinnacle of decibels, the tyrants not only in Riyadh but everywhere in our region trembled like leaves on dying trees in a windstorm. Al-Saud accused him of “seeking foreign meddling” in the Kingdom of Darkness but Nimr was the agent of no state; he was loyal to nothing and no one but ALLAH (SWT). The degenerate despots accused him of “disobeying the state’s authorities” but disobedience towards unjust “laws” and the even more unjust dictators who implement them is the duty of every Muslim who seeks to enjoin good and forbid evil, is is not? The fathers of terrorism accused him of “taking up arms against the state” but Nimr’s only weapon was his tongue. END_OF_DOCUMENT_TOKEN_TO_BE_REPLACED