The usurping ‘Israeli’ regime, with Saudi and Turkish help, staged a chemical weapons false flag attack in the Damascus countryside region of Eastern Ghouta on August 21st, 2013. It was orchestrated to force Obama’s hand into launching a direct “regime change” war to oust Syrian President Dr. Bashar al-Assad. At that point however, Hizbullah had been firmly entrenched inside Syria for a little over four months and had already achieved two massive victories in Al-Qusayr and Tal Kallakh, the Takfiri terrorists’ main supply lines in Homs. With the “rebels” weary, Hizbullah heavily involved, Syria being in possession of formidable air defense systems, Iran digging in its heels, Iraqi Resistance fighters (who mopped the floor with American ZOG forces in southern Iraq) present in Damascus, and the Russian Bear on standby to aid its Syrian ally if necessary, Obama blinked and never invaded because he felt that WW3 was a battle the US would surely lose. That was then. END_OF_DOCUMENT_TOKEN_TO_BE_REPLACED

On Naksa Day 2016, 49 years after the Zionist abomination stole the rest of Al-Quds, the West Bank, the Gaza Strip (which has since been liberated though is still besieged), the Egyptian Sinai (which the ‘Israelis’ still control though they dismantled the ‘Yamit’ settlement) and the Syrian Golan Heights (which Syria regained a part of in the ’73 October War), I am going to refrain from thinking about the hundreds of thousands of refugees brought about by this Zionist aggression, the tens of thousands of innocents murdered, the hundreds of destroyed Palestinian and Syrian villages, the new hideous Jewish colonies that have been constructed and every other monstrosity inextricably linked to the criminal ‘Israeli’ entity’s putrefying presence. Though it is indeed the “day of the setback”, I am going to try with every fiber of my being not to dwell on the sadness, the tragedies, the shattered hearts and the broken dreams, for if we stay in that dark space, we shall be swallowed. END_OF_DOCUMENT_TOKEN_TO_BE_REPLACED 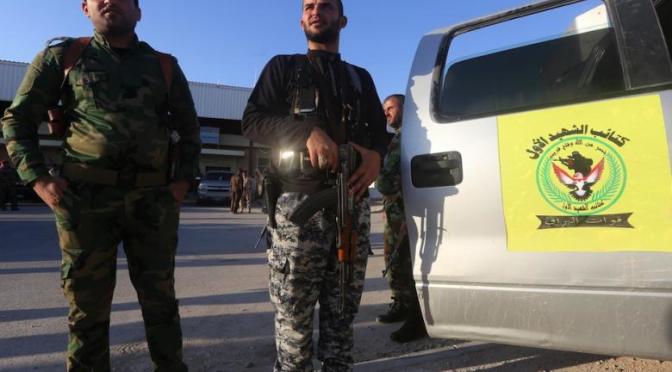 (EDITOR’S NOTE: As an Iraqi, it brings me joy beyond measure that the Iraqi Popular Mobilization has broken the barrier of fear created by ISIS and liberated the strategic town of Jaref al-Sakher. This victory has exposed the evil intentions and ineptitude of the Zionist-occupied American regime, prevented any potential Takfiri assault on Baghdad and stopped any Takfiri infiltration into Najaf, Karbala, Kufa and Basra. I also am humbled, in a way that words cannot describe, that the young heroes of the Iraqi Popular Mobilization had the privilege and honor of fighting alongside Iranian Brigadier General Qassem Suleimani — the commander of the Quds Force of the Iranian Revolutionary Guard —  who not only developed their battle plan but fought with them on the front line. Suleimani is one of the gems of the Ummah, masha’ALLAH wa ALLAH yehmi ya Rab; a man who has given his life, blood, heart and soul not only to his own nation, that of the Islamic Republic of Iran, but the Muslim nation as a whole, and freedom fighters in Lebanon, occupied Palestine and now my precious homeland of Iraq owe much to him. With all of this said however, we cannot in good conscience endorse the view of the piece below which suggests that the battle of Jaref al-Sakher, albeit important in its own right, somehow eclipses the momentousness of the battle for Al-Qusayr in the countryside of Syria’s Homs in May/June 2013. The liberation of Al-Qusayr, led by Hizbullah, changed the game in Syria; the liberation of Al-Qusayr ripped out the heart of the US-Zionist-NATO-GCC-fomented Takfiri rebellion, choked off its most vital supply line and started a chain reaction of Syrian-Arab-Army-Hizbullah-NDF victories — including the liberation of Homs in its entirety, Lattakia and the Qalamoun Mountains — that hasn’t stopped until this very moment. Whether the triumph in Jaref al-Sakher will have a similar domino effect remains to be seen but until then, overblowing it is not just insulting to Hizbullah and the Syrian Arab Army, but the Iraqi Popular Mobilization and the Iraqi army too, as they’re in for a long fight against the Empire-backed ISIS scourge and lowering their defenses along with developing a level of overconfidence would be detrimental to their struggle. The lesson to be learned here is that the Iraqis can be victorious, they can be ferocious, they can be Husseini, and they can be great, just as Commander Suleimani trained them to be. ~ Jonathan Azaziah) END_OF_DOCUMENT_TOKEN_TO_BE_REPLACED