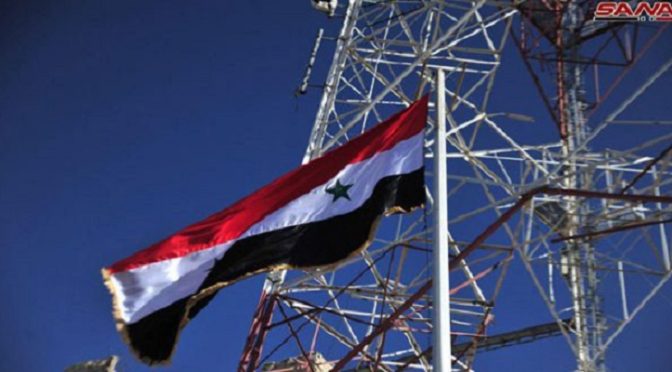 Yes! It really can’t get anymore poetic!! On the 12-year anniversary of the beginning of the July War, which saw Hizbullah achieving the Divine Victory over ‘Israel’ in a historic, paradigm-shifting battle that raged for 34 days, the Syrian Arab Republic now has a triumph of its own to celebrate: THE CITY OF DARAA HAS BEEN LIBERATED! Masha’ALLAH. Alhamdulillah. ALLAHU Akbar. And considering the war on Syria is a continuation of the 2006 Aggression, this makes the win that much sweeter; that much more spectacular. After 7 years of ‘Israeli’-spearheaded, US-UK-French-Saudi-Turkish-backed Takfiri occupation, the strategic southern city is OFFICIALLY TERRORISM-FREE after the Syrian Arab Army (SAA), Russia and their allies entered the Daraa al-Balad area, forcing World Zionism’s Wahhabi proxies to give up their weapons. Engineering units of the SAA have already made their way into the center of Daraa’s provincial capital to set up shop for de-mining operations, infrastructure clean-up and restoration of basic services like electricity and sanitation. It is in Daraa where the first martyrs of the Syrian Arab Army fell to the Takfiri terrorists on March 15, 2011. To see it finally cleansed of this scourge which has its roots not in the pluralistic essence of Bilad al-Sham, but the fanatical, hateful and inhuman darkness of Al-Saud’s palaces and Zion’s intelligence bunkers, is a joy that is just about indescribable. The bigoted, sectarian head-choppers burned Syrian, Iranian, Hizbullah and Russian flags from the jump, chanting “Death to the Shi’a” as well as “Christians to Beirut” and “Alawis to the coffins” as they smiled at the flames. Now it is their plot that has tasted death and is buried six feet deep.

It should be noted that for the last several months, the American ZOG has arrogantly and absurdly told the Syrian state that if it attempts to liberate Syrian territory in Syria’s south, a heavy price would be extracted. But what did the American ZOG do in the end? Nothing. Unable to stop the advance of the SAA and Hizbullah, and out of sheer fear of a vicious, unwinnable conflict with the entirety of the Resistance Axis and Russia, Washington had no choice but to sit back and watch all its evil work drip into a gutter. As the eyes of the Mouqawamah Bloc now turn to the imminent fight with ISIS-linked Jaysh Khalid bin Walid in Quneitra and the battle royale with the Zio-Tumor in the occupied Golan Heights, we must tip our hats to all the fallen.

Not just those who were murdered in cold blood by near-daily Takfiri terrorist shelling on Daraa’s civilian neighborhoods for the last 2,555 days. Not even just those SAA and NDF soldiers and Hizbullahi, Iraqi and Iranian moujahideen who gave their lives in defense of the city and our whole region. But also those of the first phase of this struggle: The 1,300+ innocents slaughtered in Lebanon by ‘Israel’ and heroic commanders like the moujahid Hajj Khaled “Prince of the Battlefield” Bazzi (R.A.) who sacrificed their very beings to stop the Zionist scheme dead in its tracks in ’06. Lebanon and Syria are one. And just as Hizbullah secured victory 12 years ago with Syrian help, today Syria has freed Daraa with critical assistance from the Lebanese Islamic Resistance. What a gorgeous, gorgeous day. Congratulations mighty, MIGHTY Syria. Rest easy now, peaceful and liberated Daraa. Your steadfastness leaves us speechless.