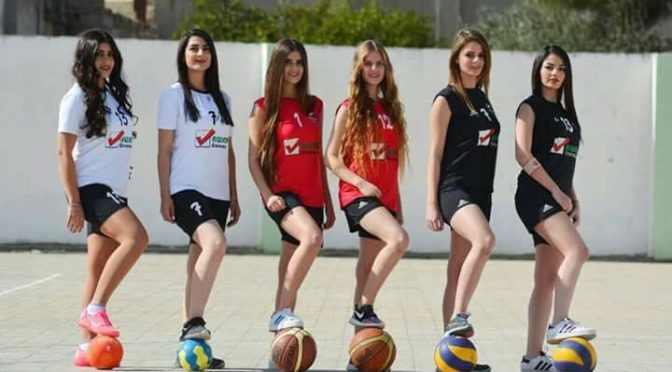 If you asked Syrians 6 years ago if they thought that playing sports would one day be considered an act of resistance key to overthrowing a Zionist project targeting our region, they would’ve laughed in your face. Hysterically. But, as odd and upsetting as it may sound, that is exactly the case at this current time. Say salaam to the Women’s Sports Team of Mhardeh in the Hama countryside. By doing what they do–playing volleyball, basketball and handball–and taking such photos, these courageous women are taking their lives in their hands. Why, you inquire? Why would gorgeous and gifted athletes like these have their very existence put at risk by virtue of their profession? Because their beautiful, picturesque Orontes River town is currently being besieged by Takfiri terrorist gangs, among them a particularly vile FSA brigade known as Jaysh al-Izza, which has received money, training and anti-tank missiles from the US ZOG. The residents of Mhardeh are predominantly Christian and have lived side by side with their Muslim neighbors in communal harmony for hundreds of years. Zio-NATO’s mercenaries want to destroy the town, burn the churches, convert the mosques into Wahhabi bases and wipe out all aspects of the Syrian way of life–ESPECIALLY women’s sports and everything else pertaining to the equal status that women have in the Syrian Arab Republic.

There are many elements to the Judaic serial war on Syria, from military to intelligence, media to economic, religious to political. The facet that sticks out like a black sheep in a sheet of snow in this instance though is cultural. What the Mhardeh Women’s Sports Team represents is Syria’s 10,000-year-old culture of pluralism and secularism. What the “rebels” besieging them and their town represent is the backwards, repressive, monstrous and draconian anti-culture represented by one of the chief backers of this bloody horror imposed on the Syrian people: Al-Saud. This is, in every sense, a classic manifestation of progress vs. regression; beauty vs. ugliness; fitness vs. lethargy; and civilization vs. barbarity.

Notice that there is no Soros-funded, Democratic Party-backed #WomensMarch for the Syrian sisters on the front lines of this cultural struggle. Notice that liberals on the one hand and Islamophobic neocons on the other have disappeared into thin air and have no support to offer the women of Mhardeh. Glaring, isn’t it? The silence, really, is just downright GLARING. That’s because Western “elites” (read: regime changers and war-makers) have no interest in discussing an ***actual*** civilization valiantly fighting to defend itself (and the world) from terrorism and a potential return to colonialist domination… They’re too busy pushing the manufactured “clash of civilizations” narrative to further the agenda of ‘Israel’. Islam and Christianity aren’t at war with each other in Syria, nor is this a “conflict” between the religious and the secular. All of these currents in fact represent different parts of a cohesive, steadfast, resistant whole, that is, Bilad al-Sham, trying to remain as such, i.e. WHOLE, in the face of the inhuman, “chosenite”-spawned Takfiri virus seeking to divide it. And “progressives” are aiding the Oded Yinon partition scheme en masse.

Indeed, is it not ironic to the point of insanity that US and EU “feminists” only seem to find their womanly passions ignited when NATO has a non-compliant Global South government to overthrow? When it comes to women with agency however, like the Mhardeh Female Sports Team and Syrian women generally, the “feminists” of Washington and Brussels find themselves on the same side as forces you’d expect them to oppose, i.e. the Takfiris. Hypocrisy? Sure. But more like complicity. There will be scores upon scores of books written about the role that “leftists” of all stripes have played in the propaganda onslaught against Syria, its people, its army and its allies. Speaking of the Syrian Arab Republic’s guardians, it should also be noted that Mhardeh’s female athletes have family members serving in both the Syrian Arab Army and the Hizbullah-trained NDF. So while they fight Takfiri barbarity culturally, their loved ones are fighting Takfiri barbarity with their blood and arms. Say the following words then lather, rinse repeat: On all fronts, Syrians wage this battle together.

It is thus most-inspiring that despite death being right around the corner, these heroines continue to play, continue to be fly as Levantine angels in the sky and continue to live. By any (and every) definition, that is resistance. Like their counterparts in the Syrian Women’s Basketball League out of Damascus, whose photos were utilized by counter-hegemonic, counter-hasbara analysts, activists and commentators last October to strike heavily at the Zionist media’s conspiracy against Syria, the Mhardeh Women’s Sports Team are soldiers in this war. And what exquisite and dauntless soldiers they are. Bringing it all full circle… Ask Syrians today, as in NOW, if they think playing sports is akin to inflicting defeat on Zionism and just watch them smile… Pause… Smile again… And then nod. #LongLiveSyria #DeathToTakfirism