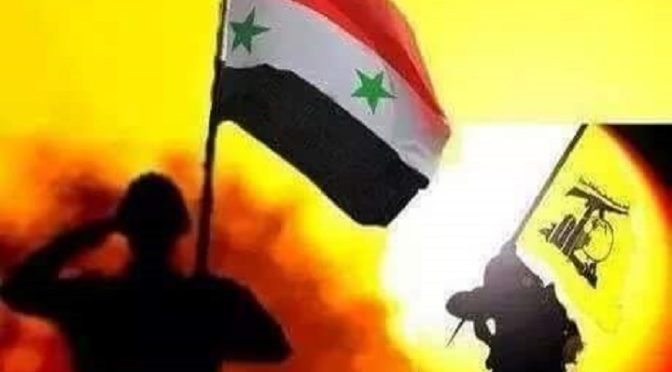 A billion congratulations to Syria, its people, its army, its government and its president on YET ANOTHER massive, strategic, map-restoring victory today! The whole of southern Syria is now free from Takfiri occupation! Over the last 12 hours or so, lightning bolt after lightning bolt was delivered to the terrorist goons by the SAA’s Tiger Forces which are commanded by the Nimr of Bilad al-Sham, General Suheil Hassan. What the recaptured territory includes is the border with the ‘Israeli’-occupied-and-annexed Golan Heights and it extends all the way to the Lebanese border near the ‘Israeli’-occupied town of Shebaa Farms as well as the Jordanian border near the village of Maariya. Hawdh al-Yarmouk has been retaken too. In simpler geographical terms, from Quneitra to Daraa City and all of Daraa Province, all the way up through Damascus (city and province/countryside), the Syrian state has full control. A billion more congratulations to the Lebanese Islamic Resistance of Hizbullah for its contribution to this glorious win. Deputy Chief of Hizbullah’s Executive Council Sheikh Nabil Qaouq said that the Mouqawamah’s contribution to the victories in Syria and the region have been witnessed by the entire world. And bear witness we do. We also bow our heads humbly to the heroes of Syria and Lebanon! Now as we think bigger, what today’s triumph also means is that there isn’t a single Wahhabi thug left who can impede a Resistance Axis offensive into Al-Jaulan where Iraqi, Lebanese, Iranian, Pakistani and Afghani moujahideen along with Syrian NDF fighters trained by martyred Hizbullah Commander Samir Quntar (R.A.) await the orders from Syrian President Dr. Bashar al-Assad to begin the next phase. It’s coming. Let it be remembered that ‘Israel’ did everything it could to stop what occurred today. From air raids on Syrian positions, to open medical, financial, political and military support to the Shi’a-hating, church-burning fanatics, to desperate and pathetic lobbying of Russia to uphold the ‘Israeli’ line. None of it worked. Southern Syria is liberated!

What remains as of this moment is the festering Takfiri enclave of Idlib along with the Turkish-occupied lands to the north and the US-occupied lands to the east. If Washington and Ankara have any brains left in their Zionist-colonized heads, they will depart peacefully before they face the same fate as their proxies: Defeat on top of defeat. Only this time, there won’t be any green buses to take them to safety. They will be trampled underneath the feet of the Lions of the Levant and the Men of God. It will be the end of the Empire. For 7 years, the Syrian Arab Republic and its allies have successfully fought off some of the most vicious terrorists in world history. It’d be asinine to think that the Neo-Imperialist and Neo-Ottoman Shabbos Goyim of Global Zionism who needed these very terrorists to do their dirty work for them would fare even remotely close to better. LONG LIVE SYRIA! LONG LIVE HIZBULLAH! TOTAL VICTORY TO THE AXIS OF RESISTANCE!