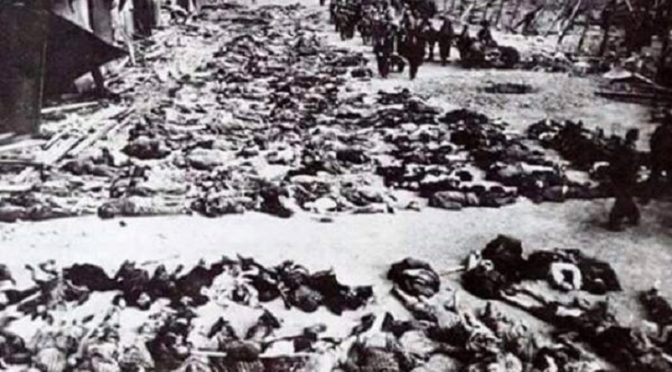 With the Tangerine Terrorist Trump bombing Syria and Mossad-CIA-created ISIS slaughtering Egyptian Christians and Muslims on Palm Sunday, the Arab world isn’t exactly focused on Palestine–just as the usurping Zionist entity wished, hoped and planned for when it unleashed the “Arab Spring” with American-Saudi-Qatari-Turkish assistance. The central strategic aim was to keep our region so inundated with “internal” strife that our compass, Palestine, would fall to the wayside. And while ‘Israel’ may have succeeded in achieving this with its collaborationist puppets like the Egyptian and Jordanian regimes, as well as the GCC and Moroccan despots, those of us with Intifada Consciousness and a Mouqawamist Mindset will never remove our eyes from Palestine, just like Hajj Imad Mughniyeh (R.A.) instructed. Noting all of this, let us take a moment to bow our heads for the more than blessed martyrs of the Deir Yassin massacre, carried out by Jewish supremacist maniacs 69 years ago today.

What took place in Deir Yassin was the apogee of human depravity and the embodiment of evil on Earth. Right at the crack of dawn on April 9th, 1948, Zionist mongrels from the Irgun and Lehi (Stern) terrorist organizations invaded Deir Yassin, a beautiful and sleepy village just outside of Al-Quds with little more than 600-700 residents. Plan Dalet, the Zionist plan to ethnically cleanse all of Palestine to make way for hordes of Jewish settler swill, explicitly marked Deir Yassin for occupation because of its strategic position as a corridor between Al-Quds and the Jewish colonist city “Tel Aviv”. Keeping in line with their orders from David Ben-Gurion (real name: Grun) himself, the Jewish interlopers began to slaughter everything that moved. Men. Women. Children. Elderly. Women who resisted were raped. There were pregnant women who had their unborn babies cut out of their stomachs. Decapitations. Mutilations. Disembowelments. It was a little Halakhic-Talmudic shop of horrors with the Jewish invaders reenacting their wildest Old Testament fantasies on the helpless Palestinian people. The persons today who shriek to the Heavens about the savagery of ISIS as if it never been seen before must not have ever looked into what the Jews did to the Palestinian people during the Nakba. Indeed, ISIS, which is armed, trained and medically treated by ‘Israel’, learned its barbarity from its masters in the usurping Zionist entity.

This wasn’t the end of the carnage though. After committing wanton slaughter, the Jewish terrorists, being thieves of the lowest sort, ransacked their Palestinian victims’ homes, stealing everything from food to jewelry to books and of course, the land of homes and businesses. Staying true to their Judaic skullduggery, the Lehi and Irgun monsters even desecrated the Gentile corpses. Moreover, around 55 children who lost their parents after the ritualistic Jewish killing festival were picked up by the Irgun and Lehi demons and dumped… Not figuratively… But ACTUALLY dumped in Old Al-Quds to send a message to the Palestinians remaining that their children would become orphans if they didn’t leave their ancestral lands with haste. Taking this cruelty further, the Jewish occupiers inflated the death toll to 254 and spread this lie around the ’48 Lands as a means of disseminating fear. But in reality, somewhere between 125-150 Palestinian innocents were barbarically murdered that day and it was this bloodshed that would set the precedent for the incoming Jewish occupation regime’s behavior for days, months, years and decades upon decades to come.

We reflect on the Deir Yassin massacre not to bathe in sadness or to feel sorry for ourselves. It is in fact in diametrical opposition to such sentiments. We remember with rage. Yes. Remembrance is Resistance. We reflect on Deir Yassin’s torment because it is a stark reminder that this is the essence of what a Jewish “state” means for the Palestinian people and our entire region. Starting from that horrific day in April 1948, “Israel” has continued to commit one Deir Yassin after another–Qibya, in Sinai, in the Golan Heights, in Jenin, in Ramallah, in Dahiyeh, in Qana, in Gaza and it goes on and on. “Extremists” didn’t perpetrate this atrocity! The men who would found the ‘Israeli’ occupation army did! This wasn’t the exception! It is the rule in every sense of the word! For 69 years, we have watched the ‘Israeli’ Jews hold Deir Yassin up on a pedestal and do their malevolent best to outdo it in every criminal, expansionist war that they wage. Which brings us to our conclusion.

The martyrs of Deir Yassin cannot have justice in a two-state solution nor a one-state solution. Both scenarios involve the usurping, occupying, butchering, invading, colonizing, mass-murdering Jews remaining in Palestine in the vast majority of the land that they stole. This isn’t justice. It’s an aversion to it. A perversion, really. Only the death of the Zionist project can bring redemption to the beautiful, sleepy village dragged through Jahannam on April 9th, 1948. Only the death of the Zionist project will allow the men, women and children who were animalistically ravaged 69 years ago to rest in peace–true, uninterrupted peace. Only the death of the Zionist project can prevent more Deir Yassins from occurring. Say it loudly and say it proudly: DEATH TO ‘ISRAEL’! And we shall see it in our lifetime, in spite of every subversive scheme that the Jews throw in our path, from Trump to ISIS and so much more. We shall truck onward. Like a wrecking ball through the Halakhic-Talmudic mists. Like a lightning bolt in the Zionist-Kabbalistic fog. Like a ball of fire in the Judaic darkness. Deir Yassin will be avenged. Come hell or high water… Deir Yassin and every inch of our beloved Falasteen will be avenged.