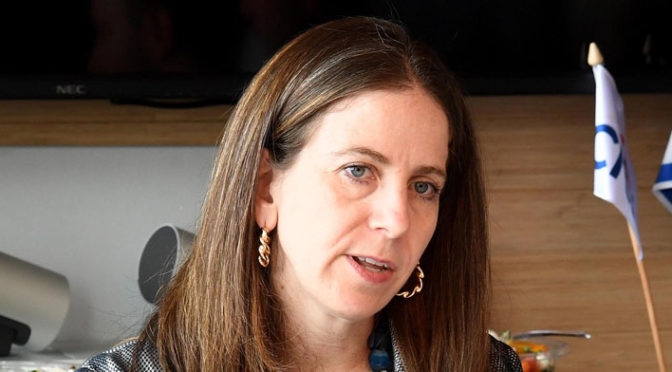 According to the usurping Jewish entity’s “Globes”, Mandelker is the “forefront” of the US-Zionist economic war on Iran and she has stated proudly that she is pursuing all avenues available to her to hurt the Islamic Republic financially, especially where it relates to “terrorism” (read: principled Mouqawamah against Zio-Imperialism). She’s not only doing it within the US regime itself but forging links outside of it with the likes of the FDD, the notorious Iranophobic think tank founded by rabid neocon Mark Rubowitz, who is also more than likely part of the secretive ‘Israeli’ intelligence program known as Talpiot.

Mandelker has admitted that the “people power” protests in Iran last summer are a result of the newly instituted sanctions that her office has constructed and spurred. She’s also recruited the Iranophobic Khaleeji dictatorships of Saudi Arabia, the UAE and Kuwait for this savage destabilization campaign, lauding the “excellent partnership” with the Emirati despots in particular. So considering Marzieh Hashemi is an Iranian citizen with an Iranian husband as well as half-Iranian children, and FARA violations are in the Treasury Department’s jurisdiction, the geopolitical arithmetic here is simpler than 1+1=2. The American ZOG’s methodology in dealing with Hashemi mirrors that of the usurping Zionist entity’s barbarity towards Palestinian hunger strikers because a land-thief from the usurping Zionist entity is controlling this circus. Indeed, as recently as Spring ’17, when over 1,100 Falasteeni heroes refused to take a knee before their “chosenite” occupiers, they were tossed in solitary confinement. Now the Feds are committing an identical atrocity against Marzieh Hashemi because the ‘Israeli’ Jewess Mandelker, their boss, has ordered them to do so.

We have deliberately repeated the word “Iranophobic” prior to getting here because Marzieh Hashemi has undoubtedly been targeted due to her familial and professional bond with the Islamic Revolution. Her deep-rooted, principled ideological adherence to its Anti-Zionist, Anti-Imperialist project too. Washington and “Tel Aviv” fear Iran because it has presented a model to the whole of the Global South, not merely Muslim nations, on how to fight the Empire, beat the Empire and forge alliances with those ready, willing and able to do the same (Hizbullah and Syria come to mind off rip). Iran is the true beacon; the real shining city on a hill. Beyond that though, the Monsters fear and hate Iran because it inspires people on an individual level, especially those from the world’s most oppressed communities, to snap out of their Capitalist-Hollywoodist-induced stupor and do something that will benefit their own people and ultimately, all of humanity.

Marzieh Hashemi’s imprisonment isn’t convincing these very people to reject their organic awakenings and stay seated for the sake of a life unharmed. It’s convincing them to move forward with JUMPING out of their slumber to stand up and speak out regardless of the consequences. Because there is no higher ideal to battle for, face jailing over and if we must, die for, than truth. None. And because if it can happen to her, it can and will happen to any of us — in fact, it’s happened to some of us already — who have the heart and the guts to say “NO!” to the lies of the Imperium. Most especially when we do so with the fire lit inside of us by Imam Khomeini (R.A.) and his successor, Imam Khamenei. It is the love of the Islamic Revolution and the intrinsic need to safeguard it that separates the true defenders of human rights from the fakes on the payroll of billionaire Zionists like George Soros–fakes, mind you, who won’t say a word about Marzieh Hashemi.

Case in point, you ask? Sigal Pearl Mandelker and all her Zionist apparatuses can sit high upon perches like the vultures they are. The soldiers of the Muhammadi-Husseini-Zaynabi nation will not lower our voices even a fraction of a fraction of an octave until the injustice against Marzieh Hashemi ends and she is liberated. And Palestine too for that matter. Silence is a word kicked out of our lexicon like Mandelker’s ‘Israeli’ brethren will soon be kicked out of our region. #FreeMarziehHashemi #FreeMarziehNow #DeathToIsrael #DeathToAmerica #DeathToTheFBI #DeathToZioImperialism #ToHellWithMandelker