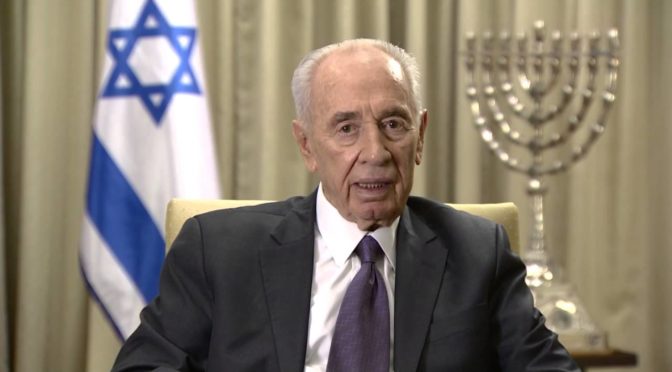 I understand the visceral need to rejoice over certified demon Shimon Peres finally kicking the bucket, especially our Lebanese and Palestinian brethren whose families have suffered the most unspeakable things at his hands of ruination. I truly do. And admittedly, I smiled ear-to-ear when I read the breaking news. Rejoicing in delirium however is not only counterproductive and out of place but completely out of touch with reality. Peres, or, as he should be called, Szymon Perski (his Ashkenazi birth name), may indeed be dead but his legacy of genocide and deception is alive and well, just as the case was (and remains) with Ariel Sharon’s (real name: Scheinermann) legacy of genocide and barbarism. There can be no rest even for a second because there are still 6-7 million usurping, occupying Jews roaming around illegally in Palestine, which means there are still 6-7 million potential Syzmon Perskis roaming around illegally in Palestine too. And make no mistake, while Sharon was a warmongering maniac who didn’t give a damn if the “Goyim” saw him drink blood in public, it is the cunning of Peres that makes him infinitely more dangerous and destructive.

Perski was indeed a paragon, if not THE paragon, of Liberal Zionism. And while many commentators would correctly argue that there is no “liberal” version of ethnic cleansing, land theft, resource pillaging and mass murder in the name of Halakhic-Talmudic law, Liberal Zionists are markedly different from their Revisionist (right-wing) Zionist counterparts in their chameleonic ability to claim they come in peace with a stone-cold straight face while simultaneously engaging in even larger, even bloodier acts of violence than their rightist coreligionists. Talk “peace”, walk war; this was Peres to the letter. As he built up ‘Israeli’ diplomatic relations all over the Global South, Africa particularly, tricking newly decolonized peoples into believing that ‘Israel’ was some kind of socialist oasis in a desert of “reactionaries”, as he preached “peace” and “tolerance” in Western capitals, as he claimed “dovishness”, as he collected the utterly fraudulent trinket known as the Nobel Peace Prize, he was also the single-greatest mover and shaker behind the usurping Zionist entity’s “defense” industry which now exports 5-7 billion dollars worth of death machines, tech and arms per year. It can be said without challenge that he was in fact the godfather of ‘Israeli’ weapons manufacturing and he was the godfather of the criminal Zionist nuclear weapons program at Dimona in occupied Al-Naqab too.

Perski schmoozed and bamboozled the colonialist French regime into helping his savage little tumor build its nukes while he signed off on operations involving theft of nuclear materials from the United States, like Project Pinto, the NUMEC debacle and the activities of LAKAM-agent-turned-Hollywood-mogul Arnon Milchan, who Perski personally recruited. And let us not forget for a moment that above and beyond all this shadowy intrigue and clandestine intelligence work, which also included creating Al-Qaeda and helping the South African apartheid regime with its own nuclear program, Perski had no issue whatsoever in spilling the blood of the innocent when it suited him. The slaughter of 106 civilians, mostly children, in Lebanon’s Qana in April ’96 comes to mind, as does the Nakba itself, in which the founding Zionist was intimately involved in running guns to Haganah as well as the Irgun. Perski was actually ideologically committed to inflicting terrorism wherever it was “necessary”, all to preserve the existence of the artificial Jewish supremacist regime. As former ‘Israeli’ Prime Minister Moshe Sharett (real name: Shertok) revealed in 1955 when writing about Pinkas Lavon who would go on to carry out the false flag known as Operation Susannah, “Peres shares the same ideology [as Lavon]: He wants to frighten the West into supporting ‘Israel’s’ aims.” Arms-dealer, nuke-builder, child-killer, terrorism-enthusiast. Perski really was “peace” personified, wasn’t he?

Sarcasm aside though, our aim here extends far beyond exposing Perski’s true colors and documenting his six decades of spreading chaos and devastation on the planet as the children of Satan tend to do. What we’re really out to achieve is a true understanding of the problem on our plates and the subsequent prevention of another Perski–or Perskis–coming into being and unleashing more immeasurable calamities like the ‘Israeli’ defense industry and nuclear program. Such a scheme is already afoot in the Palestine Solidarity Movement today. Remember that no matter what, the ultimate goal of Shimon Peres was to advance the interests of International Zionism and preserve ‘Israel’ in our midst. Despite the flowery language of solidarity and liberation that the overwhelming majority of Jewish “pro-Palestine” activists happen to use, their goal, like Perski, is to keep the ‘Israeli’ cancer alive in Palestine and stop the criminal usurper population from returning to their countries of origin.

These CHAZA, the Hebrew word for “pig”–which in this instance is being used as an acronym for “controlled, halfway-‘Anti’-Zionist agents”; clever, ain’t it? 😀 –have removed “Death To ‘Israel'” from the Palestine Solidarity lexicon, declared that support for Syrian President Dr. Bashar al-Assad and the Syrian Arab Republic is not acceptable, blacklisted Hizbullah, refused to discuss Oded Yinon, gone AWOL on discussing the ‘Israeli’ role in spreading Takfirism and noted that any talk about alternative WW2 history, 9/11 truth or Jewish influence, wealth and power on a global scale is “anti-Semitism” and grounds for termination from the ranks of the “movement”. Intellectually speaking, what makes the mindset of the CHAZA any different from Peres? They can call it “Post-Zionism” or even “Anti”-Zionism, but they are still channeling Liberal Zionism stalwart Perski’s legerdemain in totality: Talk liberation, walk the status quo. And just as so many foolish Arabs and Muslims lined up behind Peres and Rabin to back the Oslo Accords over 20 years ago, they’re falling for the okey-doke again today with the Jews of the Palestine Solidarity Movement, allowing them to dictate discourse and attempt to demolish belief in an ‘Israeli’-free Palestine like IOF demolishes Palestinian homes with bulldozers in Al-Quds. This cannot continue if Palestine and yes, the entirety of ALLAH’s (SWT) Green Earth, are to be liberated from the clutches of these deceivers.

Szymon Perski is dead, but his legacy of genocide and deception is alive and well in the form of a new, more advanced, more underhanded type of Zionist: The CHAZA. And this is exactly what cancers do, don’t they? If left untreated, they mutate into something exceedingly more difficult to deal with and ultimately defeat. But just as most of the world today looks at Perski as the sanguinary, felonious, children-butchering hypocrite he was, his ideological offspring too will meet the swords of truth and exposé, for ‘Anti’-Zionist pretenders, like their Liberal Zionist predecessors, aren’t welcome among us. Rest in torment and rot in Jahannam Peres, you foul, ghastly, heinous parasite. In the name of Qana, every inch of Palestine and all of humanity that stands on the brink of annihilation because of the usurping Jewish entity’s nuclear program that you helped birth, we declare that soon, the abomination of ‘Israel’ will die like you and all the crimes that you committed will have been for nothing. How I do know that? ‘Cause in the final analysis, vultures posing as doves do not even stand a ghost of a chance against the majestic eagles desperately hungry to fly over a liberated Al-Aqsa. #DeathToIsrael #RestInTormentPeres

One thought on “Shimon Peres Is Dead, But His Legacy Of Genocide And Deception Is Alive And Well”