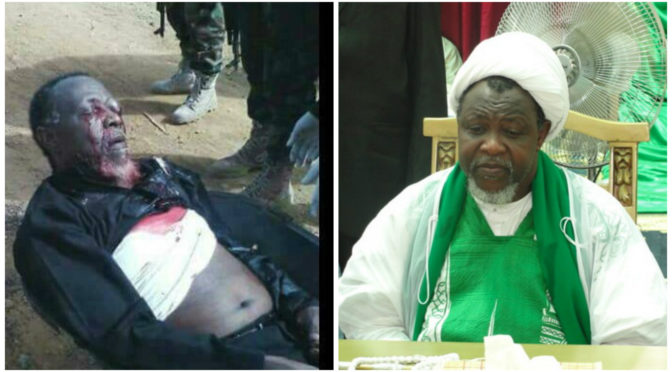 It has now been 13 months since Sheikh Ibrahim Yaqoub al-Zakzaky, Africa’s most important revolutionary and Islam’s most prolific preacher, was thrown into a hellish prison cell on baseless charges by the Amreeki-Saudi-‘Israeli’-backed Nigerian regime. And for these past 397 days, we have watched the Zionist media, “human rights” organizations like Amnesty International and Human Rights Watch, “Islamic” activists, “Palestine Solidarity Movement” workers and “Anti-Imperialists” of all different stripes go all but silent on the Sheikh’s plight and the fate of thousands of Nigerian Shi’a from the Islamic Movement of Nigeria (IMN) who were slaughtered, wounded and disappeared in the Zaria Massacre. There were handfuls of reports, tweets and posts from the aforementioned hypocrites in the immediate days following the apocalyptic scenes at the Husseiniyeh Baqiyatullah–the home, prayer-space and sanctuary of Zakzaky–on December 12th, 2015, sure. From that point however, they’ve all taken a powder.

No doubt that these spineless ones have backed away from the sublime and saintly Sheikh because he’s African, Shi’a and TRULY Anti-Zionist. But there’s another reason why Westoxified “Muslims” in the Diaspora and the NGO-Human-Rights-Industrial-Complex’s Sorosites have gone AWOL regarding Zakzaky: He’s staunchly pro-Syria and has been exposing the Zionist-Takfiri agenda against the Syrian Arab Republic from day one. The leader of the IMN has put his life on the line to bring truths on Syria to light, routinely drawing comparisons between Boko Haram and the Daesh/Nusra nexus and highlighting that they were all created by Zio-Imperialist intelligence agencies. Zakzaky has hailed Syria’s role in arming the resistance movements of occupied Palestine and Lebanon and has also spoken of Syrian President Dr. Bashar al-Assad as a man of uprightness targeted by the Hegemon because of his defiance. Even when something in geopolitics ISN’T about Syria these days, i.e. Nigeria and the suffering of the IMN, it’s STILL about Syria because Zakzaky has not allowed the “revolution” hasbara to manifest among his partisans. Like his other stances on Palestine, Iran, Hizbullah, Bahrain and Yemen, he’s paying a price for this veracity.

But just as the Sheikh has raised his voice for Syria, anyone and everyone who considers themselves an ally of the Syrian people, army and government in their struggle against this universal “regime change” conspiracy should scream at the tops of their lungs for Zakzaky. Solidarity begets solidarity and resistance begets resistance. After more than a year in hell alongside his wife Sayyeda Zeenat and several of his deputies, not to mention the fact that there is an outstanding order issued by the Federal High Court of Nigeria in Abuja calling for his prompt release, the Sheikh must be freed for the simple sake of justice. And make no mistake, his freedom will be as much a triumph for the Syrian Arab Republic as it will be for Nigeria’s Shi’a, for there is no voice on the entire African continent as thunderous and vociferous as the Sheikh’s when it comes to safeguarding Syria. May Zakzaky be liberated without any further delay, any further meddling from the US-‘Israeli’ Empire and any further torment. #LongLiveZakzaky #FreeZakzaky #LongLiveSyria