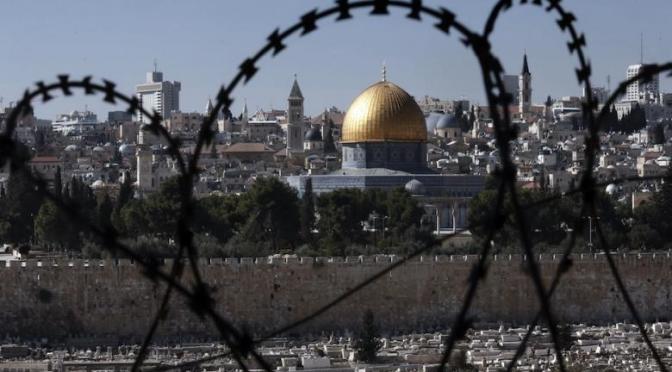 According to the guard, the settlers forced their way into the compound through the al-Magharbeh Gate and toured the complex for 15 minutes before departing through the al-Silisleh Gate.

Israeli forces, meanwhile, denied all Palestinian women access to al-Aqsa mosque, while men were allowed in on condition that they leave their identity cards at inspection stations manned by Israeli troops and police officers.

“For three hours, I tried to enter the holy compound from several gates. Each time, I was denied access by the Israeli police,” one woman barred from entering the complex told Anadolu Agency.

“They are trying to keep us out of the place so as to facilitate the [Jewish] settlers’ intrusion,” the woman, requesting anonymity, added. “But it won’t work – every day, we thwart their plots.”

Meanwhile, an Israeli soldier, aged about 20, was stabbed outside the HaHagana train station in southern Tel Aviv in Occupied Palestine on Monday.

Israeli police said the attacker had stabbed the soldier several times and they arrested a suspect, a Palestinian from the town of Nablus in the occupied West Bank.

“It was apparently an attack with nationalist motives. The suspect is a resident of the Nablus area,” police spokeswoman Luba Samri said.

The suspect was identified by family members as 17-year-old Noureddine Abu Hashiyeh from Askar refugee camp east of Nablus. His father Khaled told AFP that his son, a painter and decorator by trade, had left for Tel Aviv on Sunday.

Since July, police have arrested some 900 Palestinians for public order offenses in east Jerusalem and indicted around a third of them.

Tensions have been running high in occupied East Jerusalem, where in recent weeks Israeli forces have shot and killed two Palestinian suspects in car-ramming attacks against Israeli settlers at light rail stations.

Meanwhile, Israeli Prime Minister Benjamin Netanyahu has ordered more police onto the streets, vowing that anyone breaking the law would be “punished severely.”

“We will not tolerate disturbances and riots. We will take determined action against those who throw stones, firebombs and fireworks, and block roads, and against demonstrations that call for our destruction,” he said on Sunday.