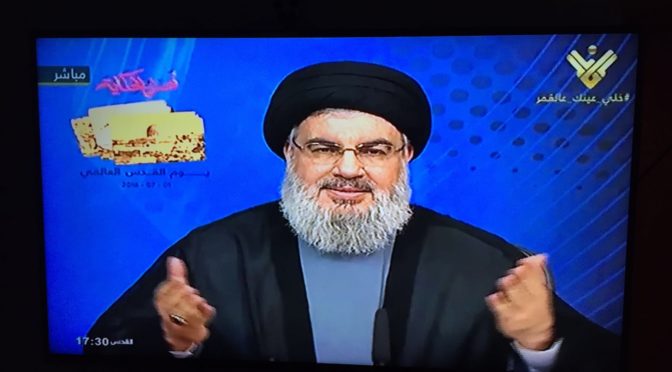 Know why Al-Quds and all of Palestine will be freed? Because Sayyed Hassan Nasrallah says so. And when Sayyed Hassan Nasrallah says something, ANYTHING, it’s only because he means it, believes it and will struggle until his last day to fight for its implementation. The Quds Day 2016 speech of the Lebanese Islamic Resistance’s Godwary and gallant leader was another blistering oratory that smashed the lies of the enemy, took the traitors to the woodshed, reinforced Sunni-Shi’a and Islamic-Christian unity in the face of the Takfiri scourge and once again highlighted that the most important task for ALL peoples in our region, whether it is achieved by our generation or the generations to come, is to eliminate the “cancerous cell” known as ‘Israel’. With his usual booming charisma, the Sayyed delivered a punch to the collective gut of every sectarian and every naysayer who dares accuse Hizbullah of “turning its weapons away from the Zionist enemy”, as if, number one, the Takfiris aren’t the stooges of the criminal, artificial ‘Israeli’ regime above all other geopolitical actors, and, number two, as if anybody else but Hizbullah is protecting Lebanon from this mental, murderous Wahhabism.

But it was this section here that was the crown jewel of the speech, “If the financial, military, political and human efforts used against Syria and Yemen were used for the sake of Palestine instead, Al-Quds and the entirety of the occupied territories would have been liberated ten times over. So let all the agents and servants of America and ‘Israel’ in our region keep in mind that while the false ‘kings’ of certain ‘Arab’ regimes may have abandoned Al-Quds and Palestine, we will never abandon Al-Quds and the Palestinian people! Never! Neither wars of aggression nor weapons, mass media deception nor destabilization schemes and vicious sectarian incitement could ever force our Axis of Resistance to abandon Palestine and Al-Quds nor make us sit idly by as ‘Israel’ spreads its corruption.”

And this is the essence of it all, isn’t it? While the GCC tyrants, Jordan, Morocco, Egypt, the Neo-Ottomans in Turkey and basically every other “Arab” and “Muslim” country have betrayed the Palestinian cause, the Axis of Resistance has dug in and fought with blood, sweat, tears and more to continue the fight to liberate Palestine and preserve the sovereignty, independence, culture and history of each respective nation and movement which it is comprised of. And again, as it is only veracity which departs from Nasrallah’s lips, this was not “bravado” as it has been described by some idiotic March 14 officials and commentators, but a promise, a TRUTHFUL PROMISE, that Hizbullah and its partners will resist, thwart, frustrate and fight back until victory is theirs.

Sayyed Hassan Nasrallah isn’t known as Wa3d al-Sadiq (Promised Truth/Truthful Promise/Promise of Truth) for nothing. He promised that Lebanon would be liberated from ‘Israeli’ occupation and it happened. He promised that Hizbullah would prevail during the July War and it happened. He promised that the Lebanese Islamic Resistance would free its prisoners from the Zionists’ jails and it happened. He promised victory in Syria and despite the continuing Western-‘Israeli’-GCC-Turkish-sponsored flow of arms, money and terrorists to the Takfiri scourge, victories and advancement unfold daily. So when the Sayyed says ‘Israel’ has no choice but death, I know it is not a mere observation but a fact. And if we don’t see it in our lifetime, then I know, in my heart of all hearts, that our seeds will. Why? Because Sayyed Hassan Nasrallah said so. And he isn’t known as Wa3d al-Sadiq for nothing. ‪#‎LabaykahYaNasrallah‬ ‪#‎LongLiveHizbullah‬ ‪#‎QudsDay2016‬ ‪#‎DeathToIsrael‬ ‪#‎Ta7yaFalasteen‬ ‪#‎PalestineWillBeFree‬ ‪#‎FromTheRiverToTheSea‬