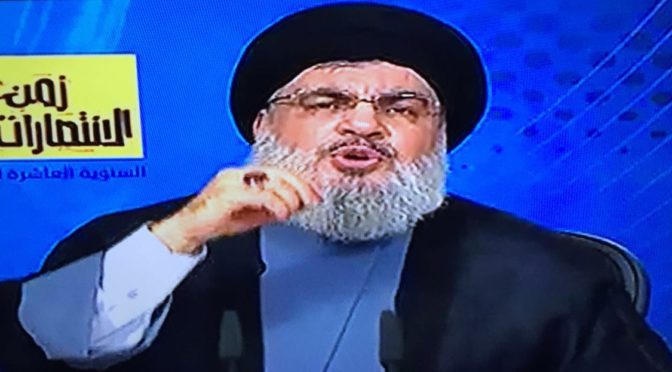 Thank you Sayyed Hassan Nasrallah. Watching the Hizbullah Secretary-General deliver yet another classic speech yesterday, I was reminded of “Spider’s Web”, the 25th and final song of my 2015 album “Son of Kufa Vol. 1: Rise Of The Anomaly”. I wrote the joint out of incredible inspiration after reading the Sayyed’s famous May 26th, 2000 speech in the legendary Southern Lebanese town of Bint Jbeil for the billionth time. Those seven little words, “‘Israel’ is weaker than a spider’s web”, have resonated with me for as long as I can remember and they represent the very cornerstone of my worldview when it comes to the cancerous existence of ‘Israel’ and International Zionism generally. Those seven little words represent hope, truth and victory all at once. Those seven little words are our comfort in times of what can feel like overwhelming gloaming. Because if Hizbullah could prevail then, and if Hizbullah could prevail again in the 2006 July War, and if Hizbullah and its allies can prevail today in Syria against Zio-Takfirism, then Palestine, ALL OF PALESTINE, can and will prevail tomorrow.

Why? Because as Sayyed Hassan Nasrallah noted in his latest speech, commemorating 10 years since the Divine Victory, the usurping Zionist entity as of right now remains weaker than a spider’s web. Even weaker than that in fact! This putrefying tumor, with its illegal nuclear weapons, stranglehold over Imperialist regimes, influence in the upper echelons of every Western sphere of power, the most advanced technology in our region, and, allegedly, the “fourth strongest army in the world”, remains on its deathbed. ‘Tis only a matter of time ’till its last breath. US and EU geopolitical analysts, long in the pay of the Zionist Power Configuration, now openly question if ‘Israel’ can last as an entity. So declared Sayyed Abou Hadi, the most luminous revolutionary of our time, that the “spirit” of the Zionist entity was broken by Hizbullah’s mighty, heavenly moujahideen in 2006, and thus, ‘Israeli’ commanders, politicians, strategists and rank-and-file occupation soldiers also question how much longer their genocidal Jewish supremacist project will continue to exist.

Hizbullah didn’t just defeat ‘Israel’ 10 years ago, it permanently branded the enemy as the “entity of the spider’s web”, and on the day that we march into Al-Quds and kiss its hallowed ground when this entity ceases to be, Sayyed Abou Hadi’s seven little words will be ringing out like Eastern Orthodox church bells and the Fajr Adhan combined, only twice as beautiful. Thank you Sayyed Hassan, I rhyme what I rhyme, write what I write, do what I do and believe in our inevitable final triumph because of you. #LabaykahYaNasrallah #LongLiveHizbullah #DeathToIsrael #EntityOfTheSpidersWebWillFall